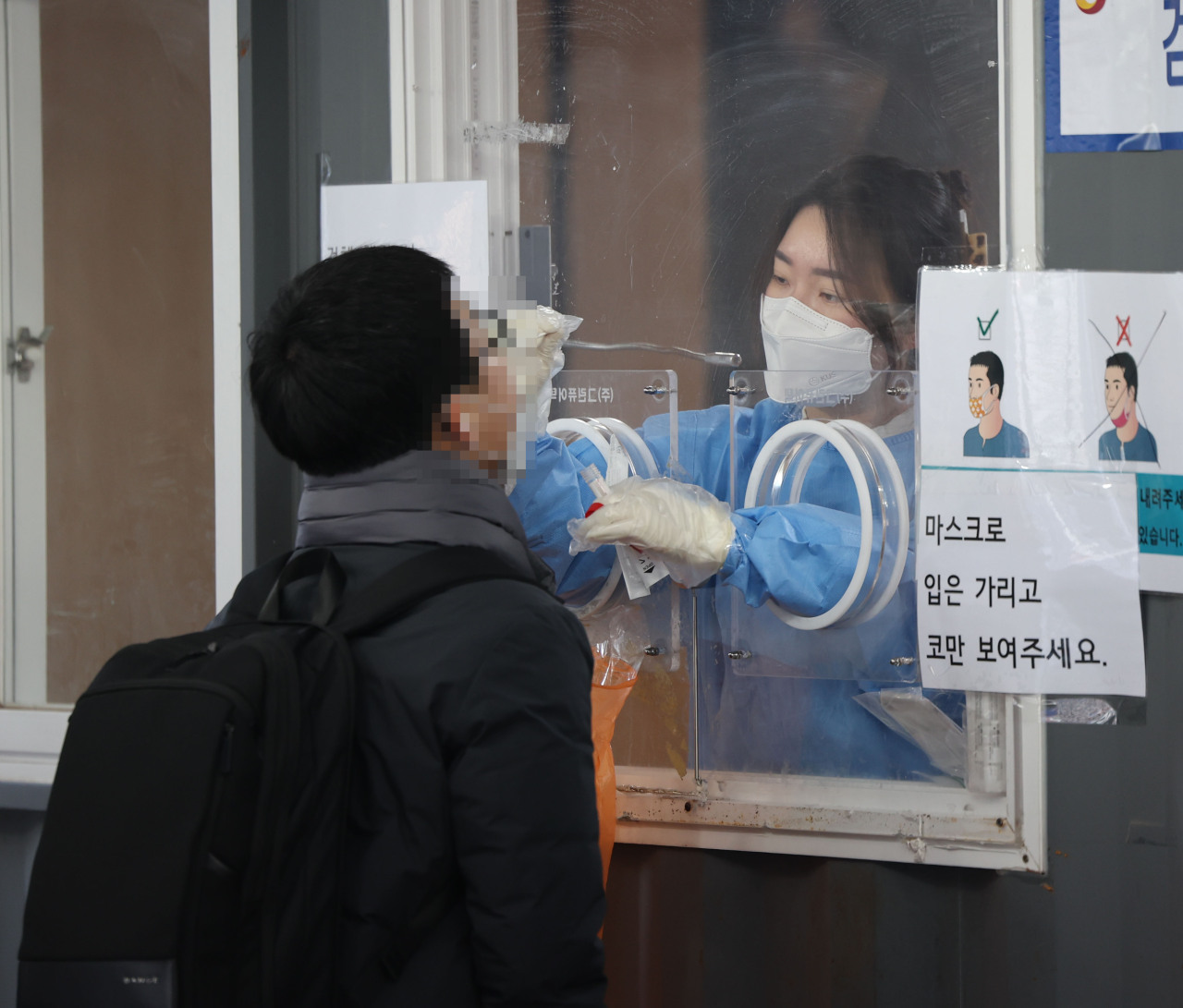 A medical worker carries out a COVID-19 test on a man at a makeshift testing station at Seoul Station in Seoul on Friday. (Yonhap)
South Korea's daily COVID-19 cases reached yet another record high Friday, as the country grapples with the rapid spread of the highly transmissible omicron variant with a new nationwide virus response system set to come into force.

The daily count broke the record for the fourth consecutive day, spiking from 8,570 on Tuesday. The per day figures have more than quadrupled since Jan. 17, when the tally hovered around 3,800.

The number of critically ill COVID-19 patients was 316, down 34 from the previous day.

The public health agency said the infection tally could surge to as many as 100,000 a day in the next several weeks.

Testing stations set up at public health centers and large hospitals will adopt both rapid antigen self-tests and polymerase chain reaction (PCR) tests. People can choose which one they want to take.

People aged over 60 or in high-risk groups, such as those with underlying illnesses, will be prioritized for PCR tests.

"We'll ultimately change the medical system to respond to COVID-19 within the everyday medical system rather than a separate, specialized medical system," Health Minister Kwon Deok-cheol said in a regular briefing on virus response.

"This is an inevitable transition to reduce severe cases and deaths by focusing on the swift diagnosis and treatment of high-risk groups with the limited resources available," Kwon said.

The government is in talks with the medical community to encourage as many as 1,000 local clinics to participate in the testing and treatment.

The system will expand nationwide after the three-day Lunar New Year holiday running till Wednesday.

Of the locally transmitted cases Friday, Gyeonggi Province that surrounds Seoul reported 5,143 new COVID-19 cases, followed by Seoul with 3,946 and the western port city of Incheon at 1,228.

As of Friday, 26.35 million people, or 51.4 percent of the country's 52 million population, had received booster shots, the KDCA said. The number of fully vaccinated people came to 43.93 million people, accounting for 85.6 percent. (Yonhap)