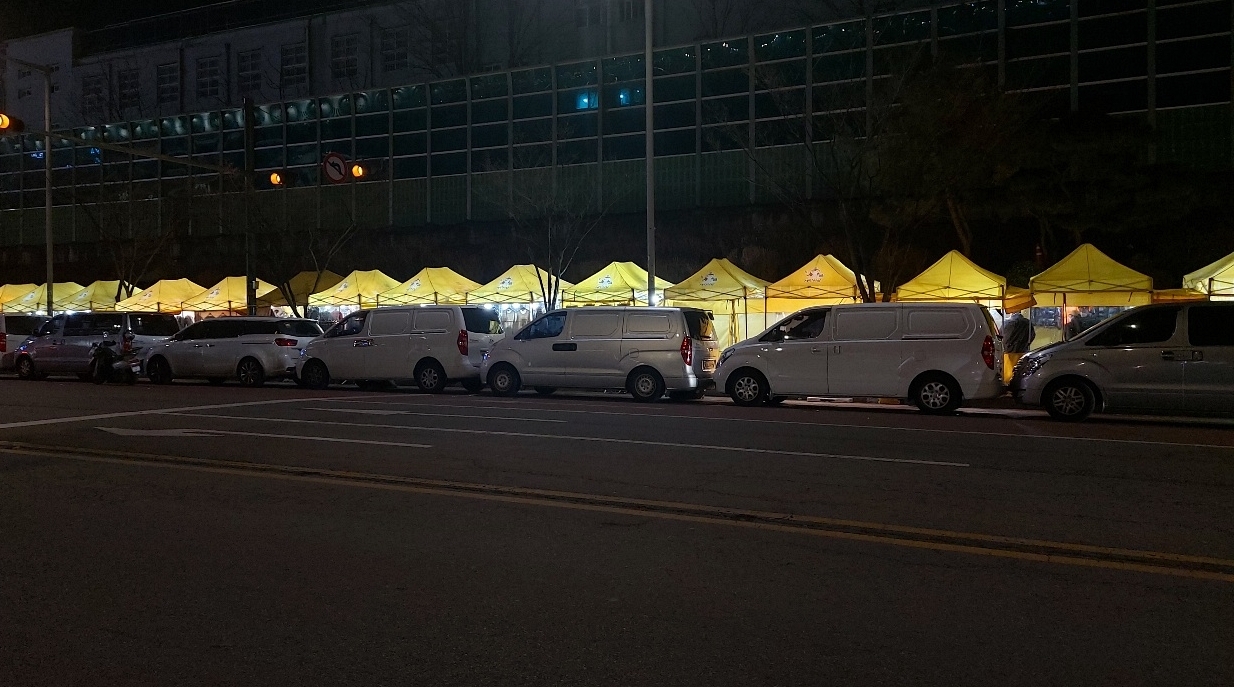 Yellow tents are clustered together at Dongdaemun Saebit Market on Wednesday night. (Jie Ye-eun/The Korea Herald)
Dongdaemun Market is the center of the Korean apparel and fashion industry. Near the market is another “secret” spot for shoppers who want luxury fashion items but cannot afford them. This place is called Dongdaemun Saebit Market, the nation’s largest fake designer goods market.

Near Dongdaemun Design Plaza Station Exits 2 and 3, about 80 small yellow tents are clustered together, selling counterfeit luxury fashion goods that look pretty much like high-priced brands such as Moncler, Thom Browne, Cartier and Rolex. The products on offer include almost every type of fashion item, from bags and clothes to running shoes and watches.

Despite deepening concerns over the fast spreading omicron variant and sub-zero temperatures, the fake designer market was crowded with eager shoppers. Although the place only operates at night from 9 p.m. to 2 a.m., more and more people flocked to the venue as time passed later into the night. 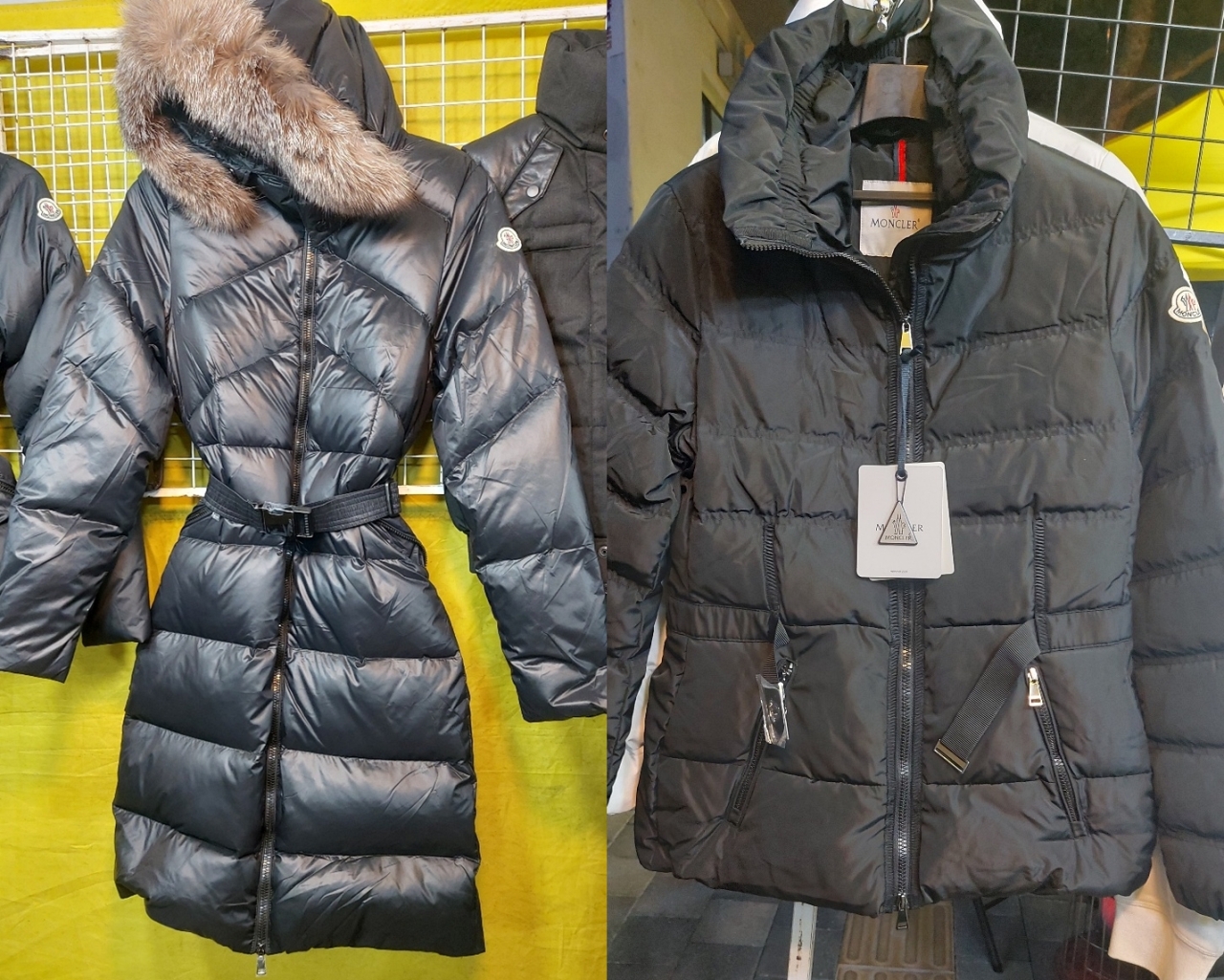 Rreplicas of Moncler outerwears are displayed at Dongdaemun Saebit Market. (Jie Ye-eun/The Korea Herald)
“This is Moncler’s newly launched long down jacket. (The genuine product) is priced at some 2.8 million won ($2,330) but I’ll give it to you for 220,000 won. No more discounts! I was selling it at 280,000 won last week,” a seller who looked about 40 said when The Korea Herald reporter glanced at the item.

While there are many “grades” of counterfeit products, ranging from the obviously fake to the nearly identical, another seller attracted shoppers by promoting her products as “Ultra A” grade -- super high-quality fake products. The prices were less than 10 percent of the genuine products. Her customers seemed mostly in their 20s to 40s.

“I have brought some good local stuff. High quality products are made in Korea, but the majority of clothes are imported from overseas, like China ... Since it takes so long to bring in (clothes) wholesale, especially during the pandemic, I wish I could bring more local products. But factories are out there to avoid crackdowns. I can’t help it,” the seller whispered to the reporter. 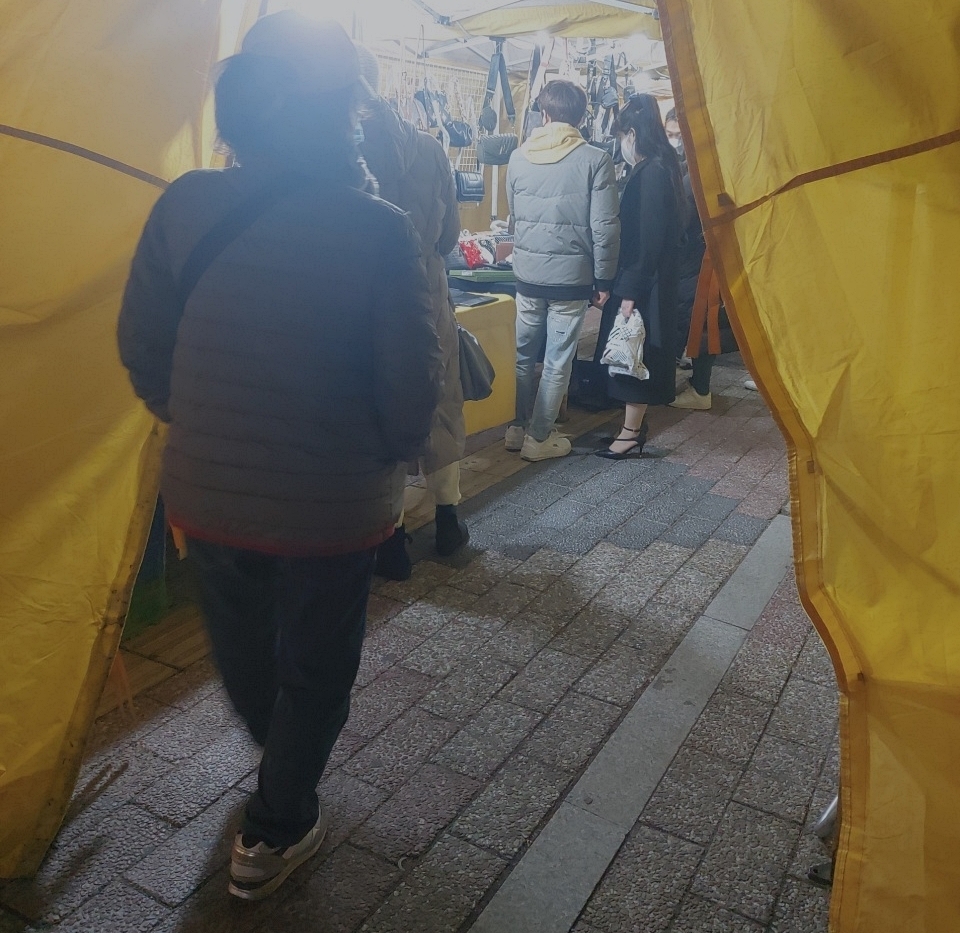 Shoppers at Dongdaemun Saebit Market look at counterfeit luxury items on Wednesday night. (Jie Ye-eun/The Korea Herald)
In the meantime, some sellers warned customers that “photos and recordings are not allowed.” Since it is illegal to sell and import fake goods, they paid keen attention to visitors’ smartphones. Shoppers and buyers only dealt products in cash and bank account transfers. Sold items were handed over in black plastic bags. Sellers’ trucks were parked right next to their yellow tents, apparently ready to flee in case police come for random inspections, which can happen at any time.

Two female shoppers in their early 30s were on their way home, their hands full of black shopping bags. While it was their third visit to the market, they had spent about 800,000 won that day for a short puffer jacket, two mini crossbody bags and a pair of sports shoes. They seemed very satisfied with their purchases, saying, “Although we spent money, we feel like we’ve saved a lot.” 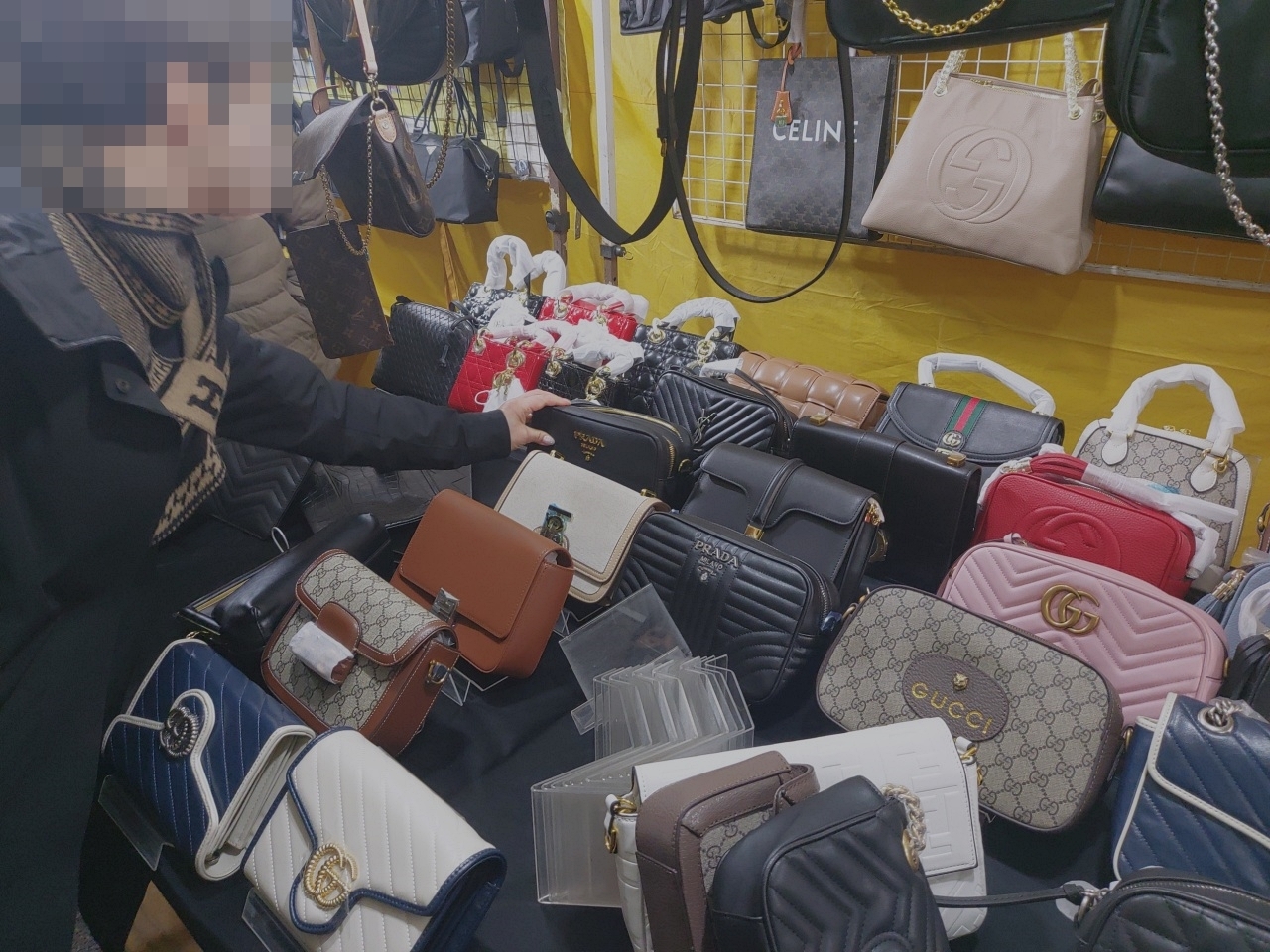 A shopper looks at a fake Prada shoulder bag at Dongdaemun Saebit Market on Wednesday night. (Jie Ye-eun/The Korea Herald)
Those who violate the country’s trademark law can be sent to prison for up to seven years or pay up to 100 million won in fines. Local authorities are clamping down on such cases, but an increasing number of illegal dealings are taking place these days. In some European countries, counterfeit product buyers can also be punished with up to three years in prison or up to 300,000 euros ($336,800) in fines. However, in Korea there is no law to penalize those who buy counterfeit goods.

According to the data compiled by the Korea Customs Service, about 467.9 billion won worth of counterfeit bags, or 1,866 cases, were seized from January 2017 to August last year. Louis Vuitton was the most frequent victim of counterfeiting, followed by Chanel, Gucci and Hermes. The local fashion industry also predicts that the number of knockoffs has increased during the pandemic, since people chose to secretly buy and sell the copies through social media platforms.

Experts note that Koreans are obsessed with fake designer goods. The country’s collectivism and people’s conspicuous consumption tendencies increase their unwholesome desire, according to Kwak Geum-joo, a professor of psychology at Seoul National University. 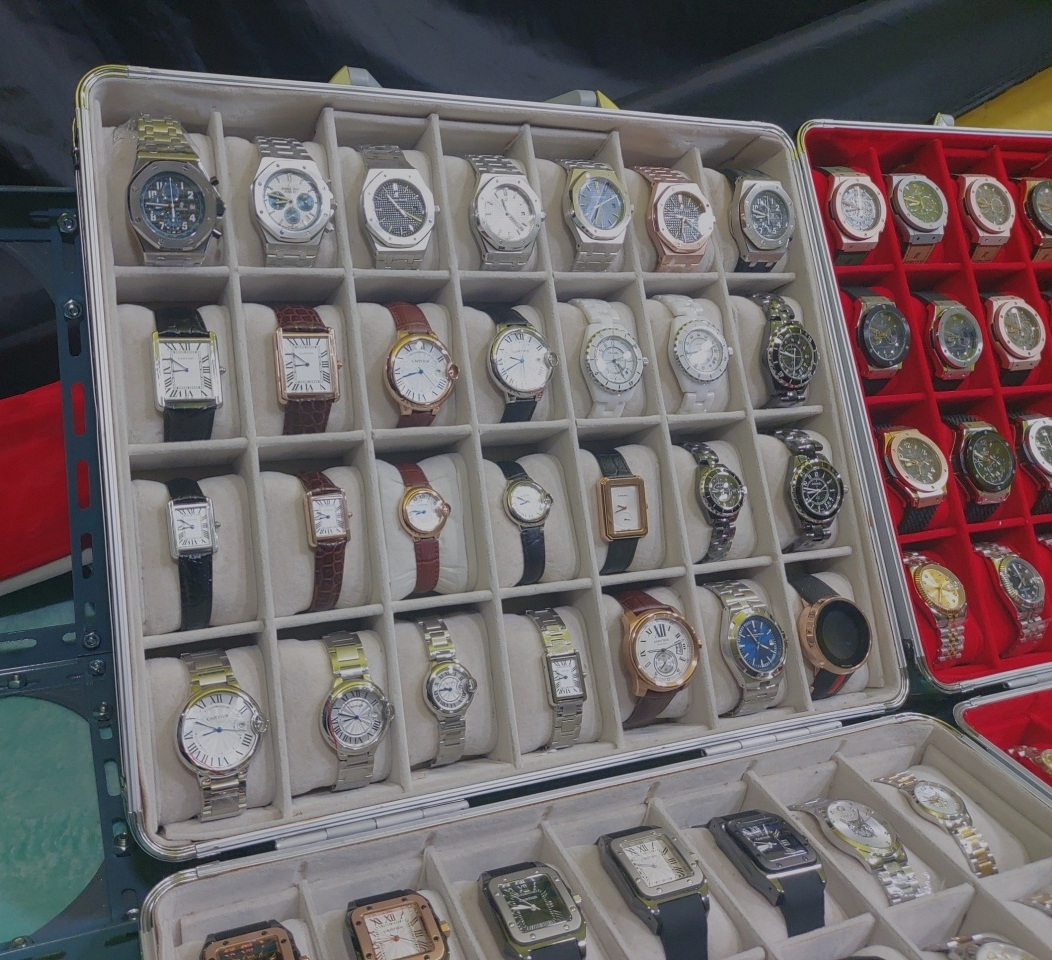 Counterfeit watches that resemble high-priced brands are displayed at Dongdaemun Saebit Market. (Jie Ye-eun/The Korea Herald)
“Korean society is very sensitive to trends and people care a lot about others. To feel a sense of belonging, people choose to follow others to be involved in a group. Also, to achieve superiority over others, they tend to wear expensive items to show off,” the expert told The Korea Herald.

“But since they cost too much, some choose to buy fake items. They may even feel a sense of joy in deceiving others. Their tendency, however, is unlikely to change since buying counterfeit items is also a consumption habit.”

Consumer studies professor Lee Eun-hee of Inha University attributed the fake product consumers’ buying behavior to a strong sense of rivalry. Lee used the expression “Turning green with envy” as an example. At the same time, the expert highlighted the importance of raising awareness of intellectual property rights.

“Not only selling but buying counterfeit products is stealing. The country’s law should be strengthened to cease such illegal actions, but related authorities have to actively inform the public that it is wrong. Consumer education can take place through various campaigns as well.”