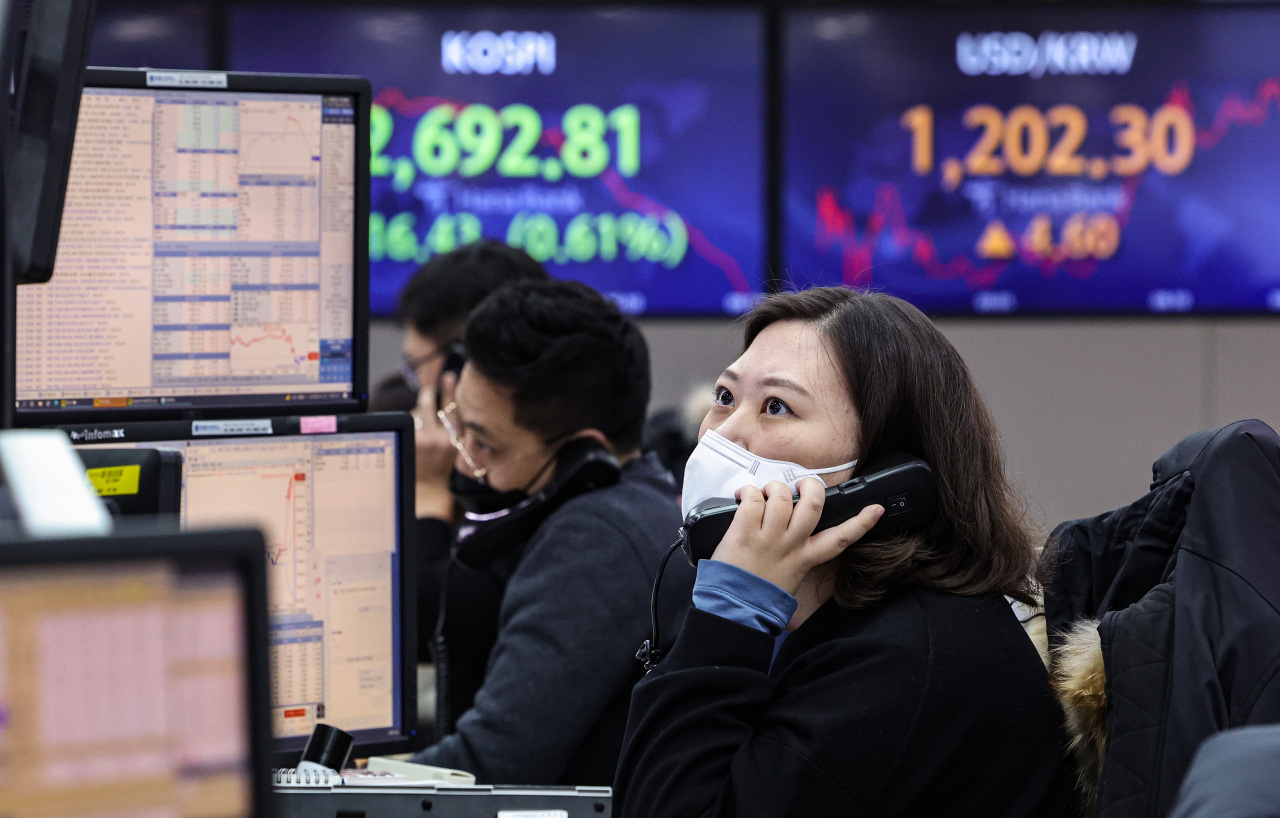 An electronic signboard at the dealing room of Hana Bank in Seoul shows a weak position of local stocks and currency on Thursday. (Yonhap)
SEJONG -- South Korea’s stock index plunged and the currency lost its ground versus the US dollar on Thursday, following US policymakers’ stance overnight signaling an interest rate hike in March.

The weaker position in the financial indices comes after senior officials from the Finance Ministry and the Bank of Korea forecasted earlier in the day that the hawkish position of the US Federal Reserve on the local capital market would bring limited effects.

Fed chair Jerome Powell clarified overnight that the US Federal Open Market Committee could move to “raise the federal funds rate at the March meeting assuming that the conditions are appropriate for doing so.”

Following the US signaling of tighter monetary policy, the benchmark Kospi traded under 2,700 points in the wake of the net seller position of foreign investors. This marked the first time in about 14 months since December 2020 that the local equities are traded at the 2,600-range.

Compared to the first trading session, on Jan. 3, 2021, when it closed at 2,988.77, the Kospi lost more than 10 percent as prior worries over the US possible rate hikes had continuously been reflected.

The dollar broke the 1,200-won mark while it traded between 1,185 won and 1,198 won over the past two weeks. The greenback price has continued to climb over the six months after staying under 1,150 won in the first half of 2021.

The cheap won could possibly aggravate concerns over inflationary pressures amid a sharp climb in consumer prices since the fourth quarter of last year.

As another round of spikes in the prices of international crude and raw materials are building worries over instability in consumer prices, the currency’s weaker value could further undermine the purchasing power of the nation and households.

Earlier on Thursday, the Bank of Korea assessed that remarks from the US Fed have commonly accorded with market expectations despite the policy directions being somewhat hawkish.

The BOK added that it would take measures for market stabilization, if necessary, in consideration of the US monetary policies toward interest rate normalization and other external factors.

He predicted that the US Fed’s “effect on the local financial market will not likely be big. Korea’s economic fundamentals have continued to show soundness.”

The government will continue to closely monitor the indices at home and abroad amid high uncertainty about the pace of the US monetary tightening and global risks of inflation, he said.

He also commented on the possibility that the government would carry out policy coordination with the BOK to launch market-stabilizing measures in a timely manner, which could include the central bank’s purchase of treasury bonds.