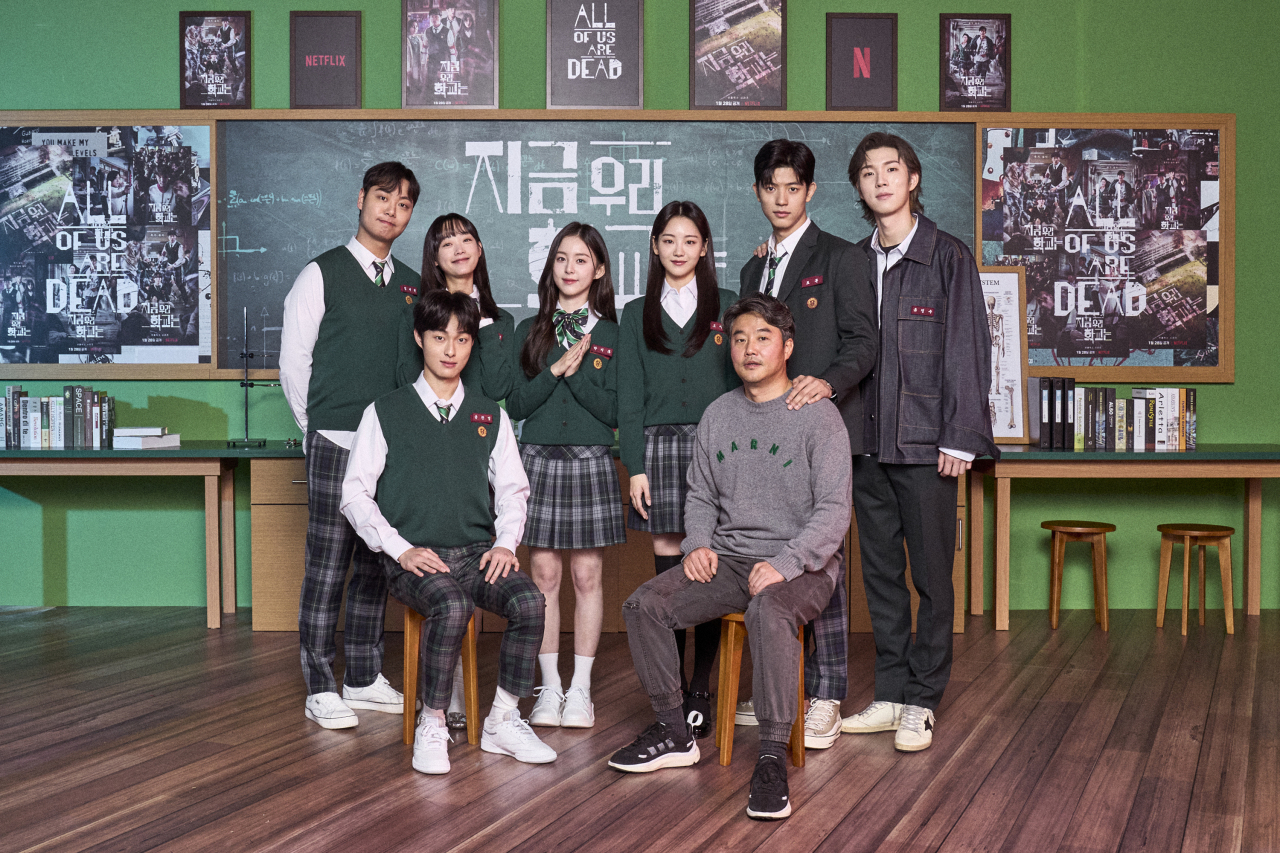 From top left, clockwise: Actors Lim Jae-hyeok, Lee Yoo-mi, Park Ji-hu, Cho Yi-hyun, Lomon, Yoo In-soo, director Lee Jae-kyoo and actor Yoon Chan-young pose for a photo before an online press conference Wednesday. (Netflix)
For 51-year-old director Lee Jae-kyoo of Netflix’s “All of Us Are Dead,” adapting a classic zombie webtoon was a high-pressure project, but he was certain that the thriller would entertain viewers with its fascinating storyline and heart-pounding action sequences.

“I would be lying if I said I felt no pressure in reproducing the legendary webtoon into a 12-part Netflix series. However, I consulted with author Joo Dong-geun numerous times to create the series and I am excited to showcase ‘All of Us Are Dead’ to the viewers,” Lee said during an online press conference Wednesday.

“Though there are many zombie works, most of them are about things that happen to adults. Our series centers on a zombie virus spreading among young students. It will be interesting to see the students’ behavior and their nature in a desperate situation,” the director added.

According to the director, the series spends a lot of time presenting how the zombie-turned-human undergoes various stages of emotional change, from sympathy to fear and anger, casting a different light on the blood-thirsty monsters.

While complimenting the young actors‘ performances and dedication, Lee took a moment to praise the actors for their long hours of practice that resulted in some spectacular scenes. 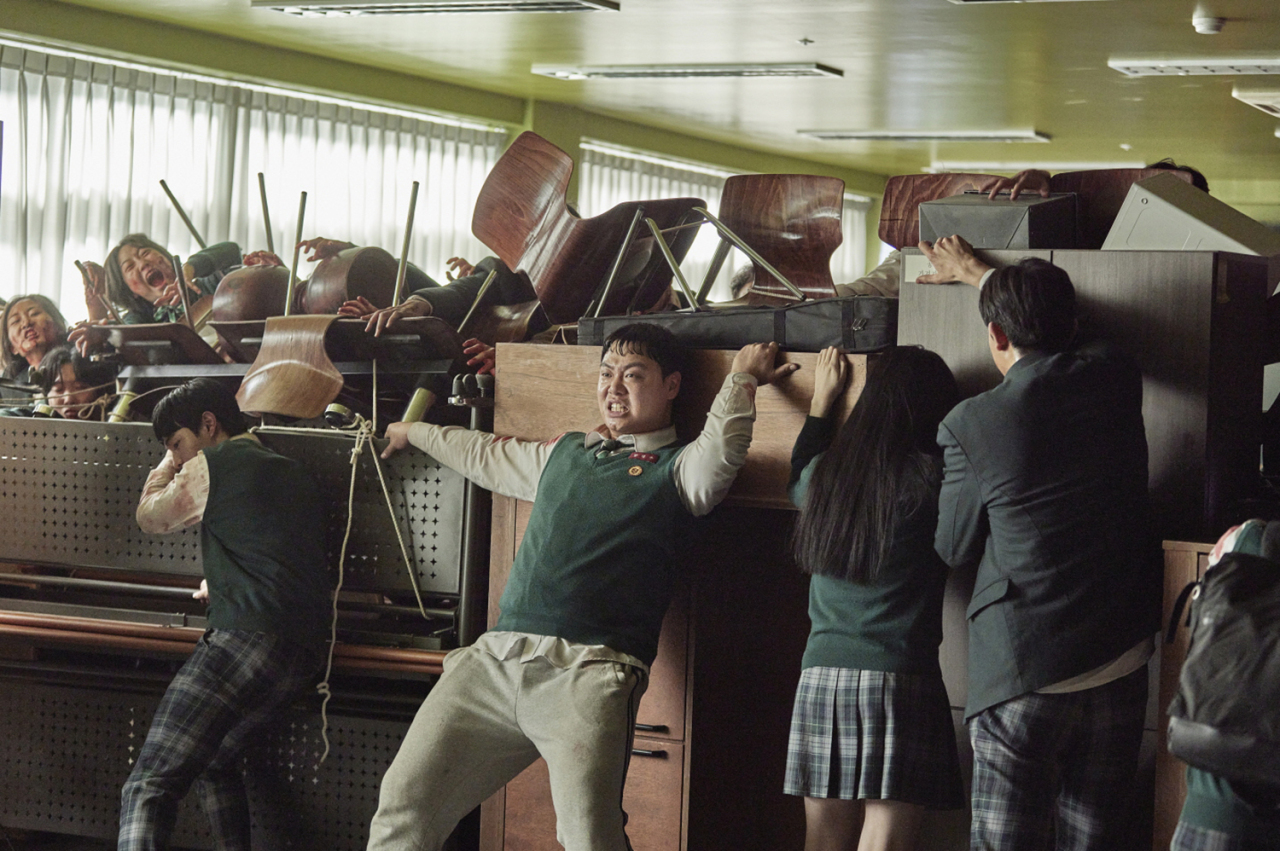 Students fight zombies in “All of Us Are Dead” (Netflix)
“I had previously never spent whole days on rehearsals, but for this one, we did spend whole days just rehearsing. To deliver dynamic and lively action scenes, the staff and I tried to do many one-takes. The tryouts with hundreds of zombie actors was a challenge, but their efforts made everything possible,” Lee said.

The director sought to raise a number of issues concerning schools today, such as school violence and bullying, through “All of Us Are Dead,” believing these are not limited to schools.

“I hope people can reflect on the social issues, while enjoying the series,” Lee added.

Park Ji-hu, 18, who played the lead character On-jo, did not hide her excitement about the upcoming series. 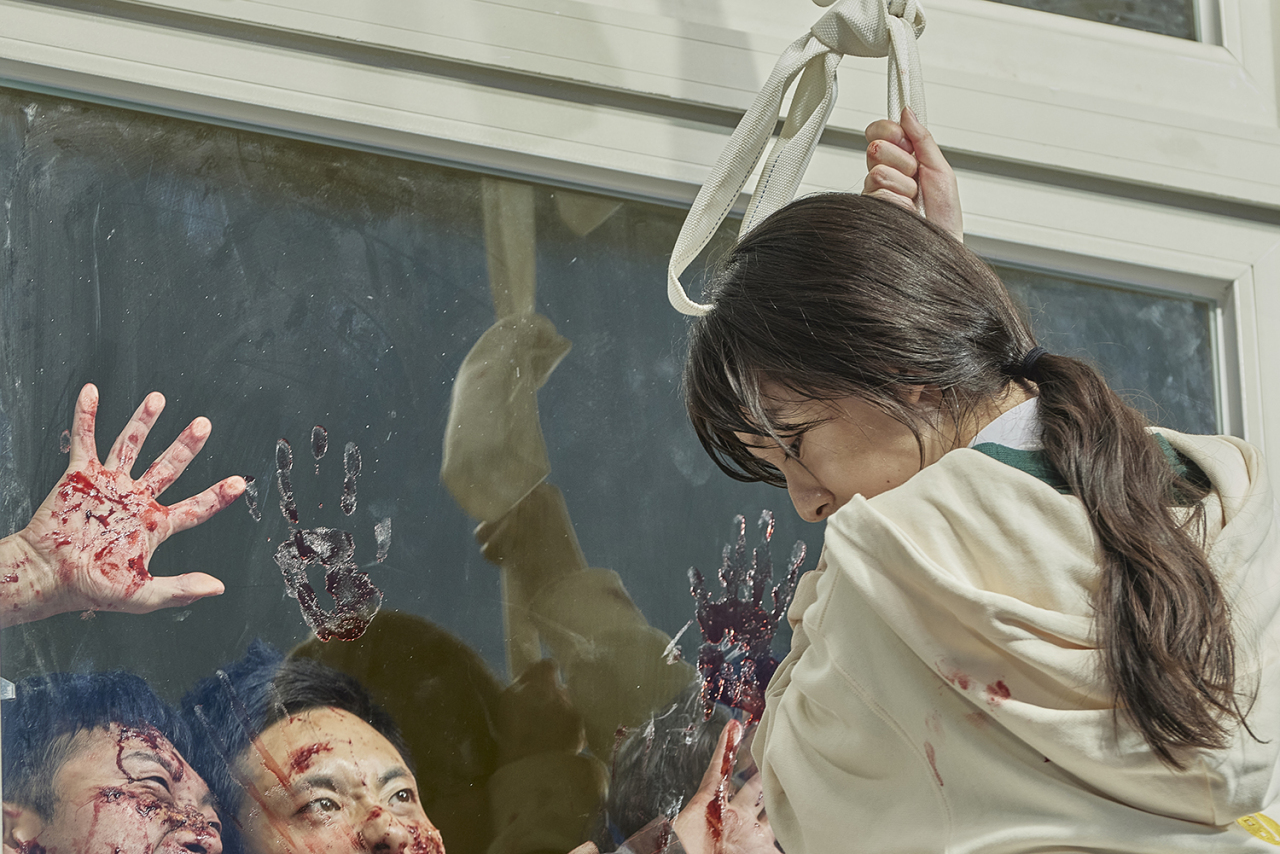 On-jo (played by Park Ji-hu) escapes zombies in “All of Us Are Dead” (Netflix)
“A wide variety of zombies -- wearing school uniform, track suits, hair rollers or a traffic cone -- appear in different areas of the school, like the cafeteria and the infirmary. These features will be interesting to watch and I hope the viewers will be quickly drawn to our series,” Park said. 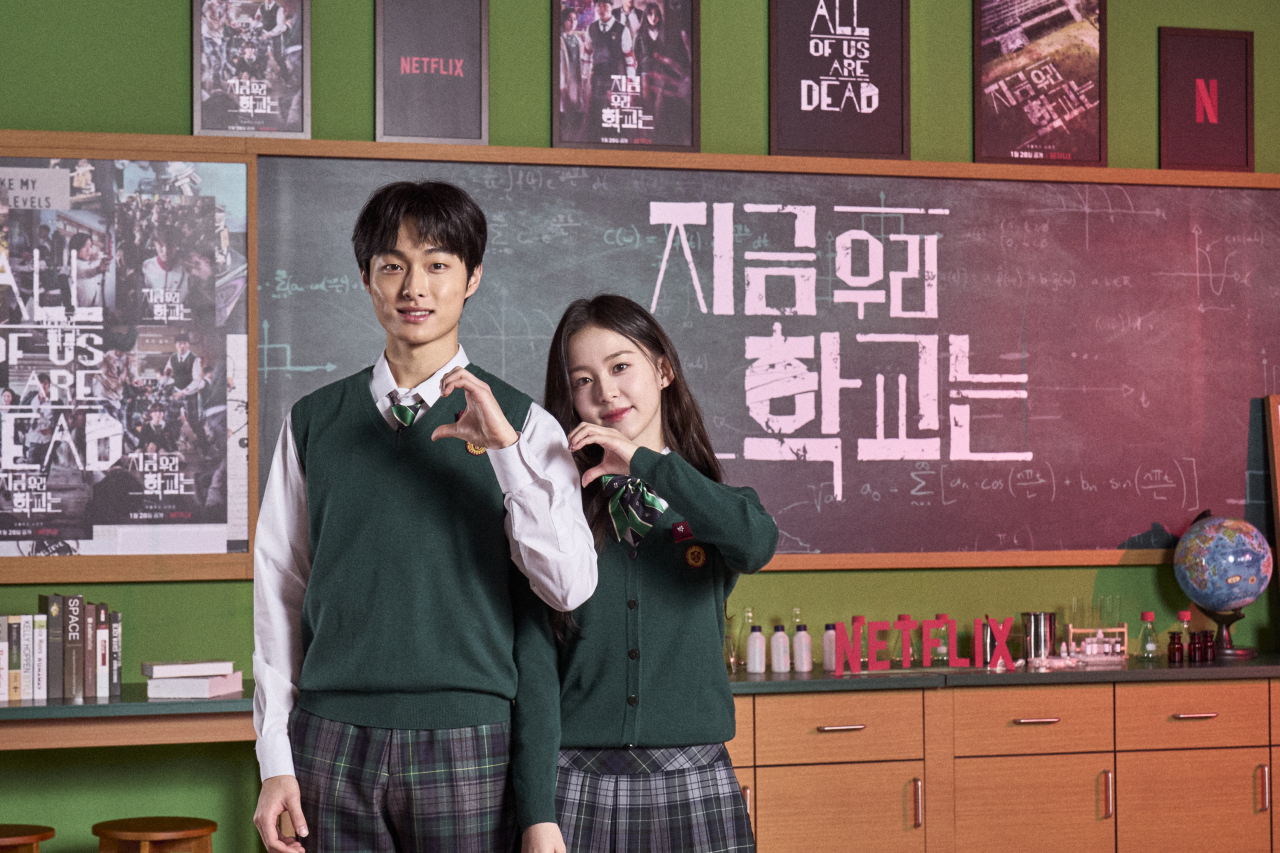 Yoon Chan-young (left) and Park Ji-hu pose for a photo before an online press conference. (Netflix) 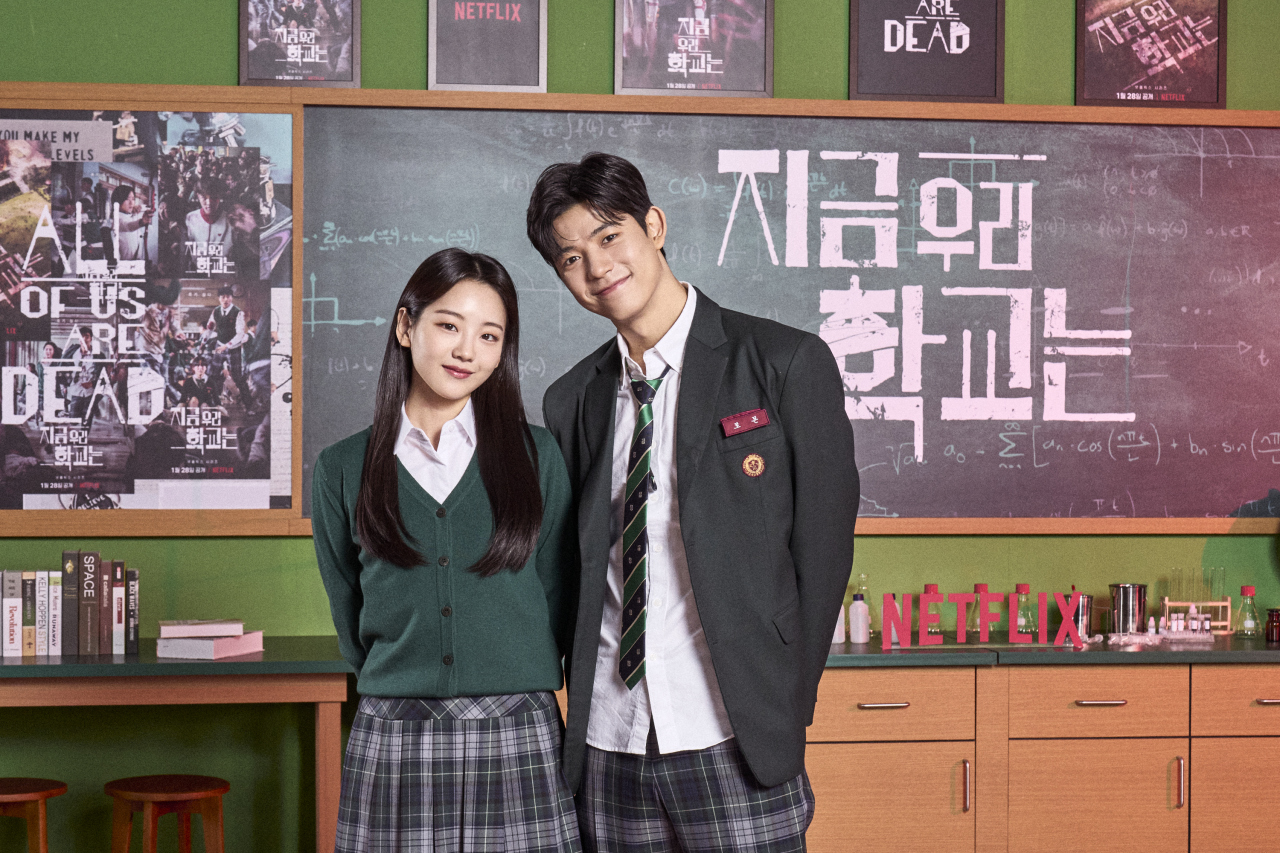 Cho Yi-hyun (left) and Lomon pose for a photo before an online press conference. (Netflix) 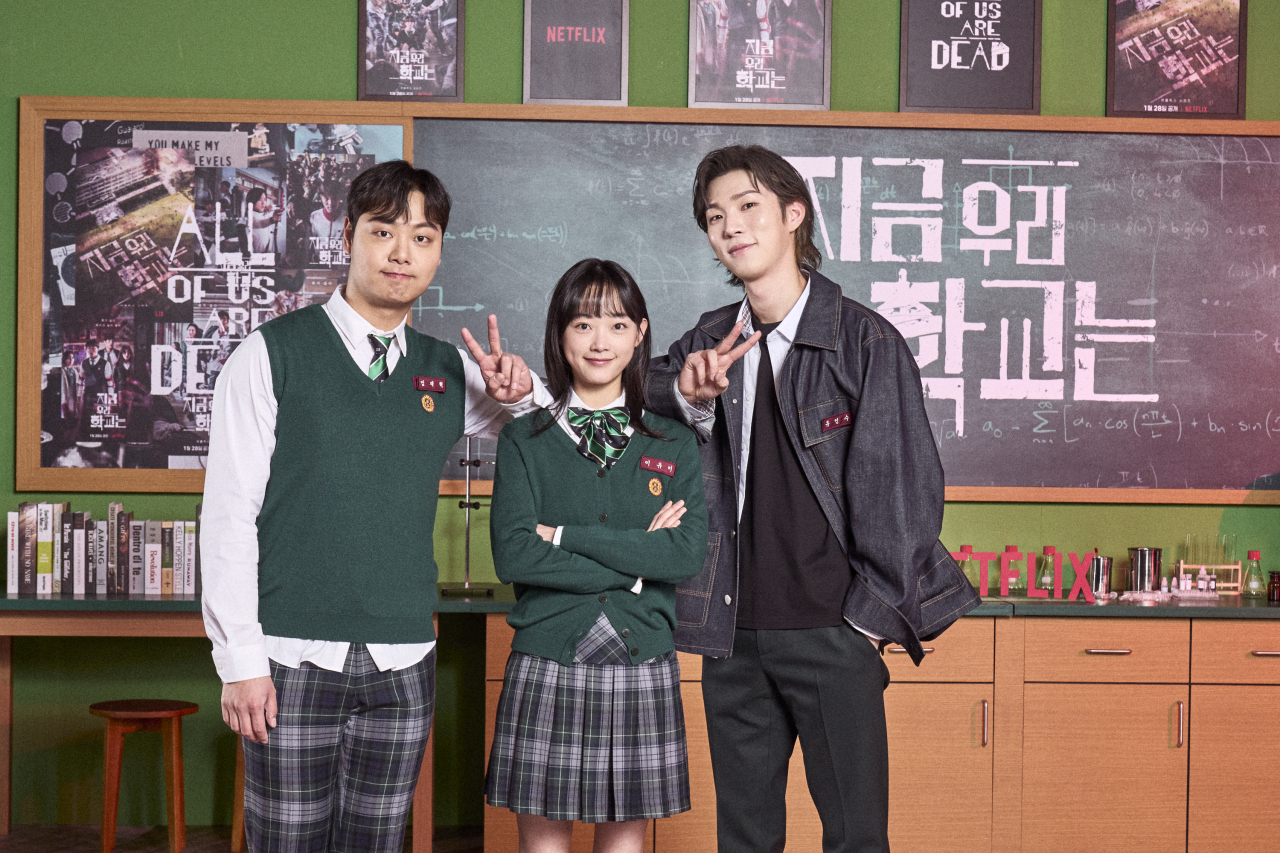 Lim Jae-hyeok (left), Lee Yoo-mi and Yoo In-soo pose for a photo before an online press conference. (Netflix)
“All of Us Are Dead,” an adaptation of a webtoon series of the same title, stars many young actors, including Park, Yoon Chan-young, Lomon, Yoo In-soo and Lim Jae-hyeok. It also features Cho Yi-hyun, best known for her medical student role in tvN’s “Hospital Playlist,” Lee Yoo-mi, known for her heart-rending scene with Jun Ho-yeon, as Ji-yeong and Saebyeok respectively, in the marbles section of “Squid Game.”

The 12-part series will arrive on Netflix on Friday.