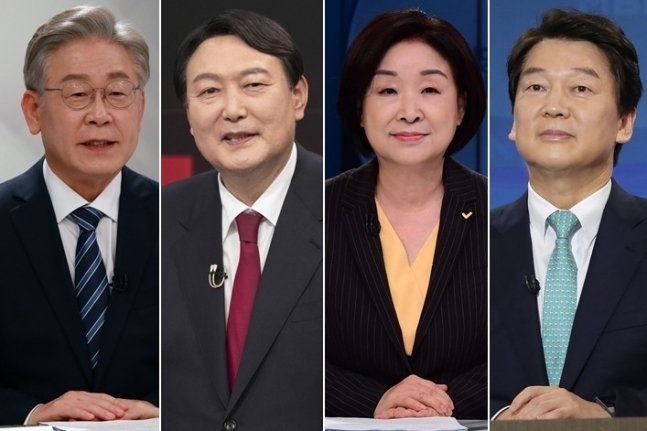 The proposal, which attempts to bypass a court decision prohibiting the two leading candidates from holding a televised debate without including rivals from minor parties highlights the importance that political parties place on debates.

For many, TV debates in presidential elections are where the “real battle” takes place.

With presidential candidates standing side-by-side and discussing state affairs, TV debates act as a yardstick for voters, with everything aired live: how the candidates present their election pledges, their attitudes toward rivals, and how they handle slips of the tongue.

And with the election just around the corner, political parties are pushing to set up more debates in conditions favorable to their candidates, before the three mandatory TV debates take place.

On Wednesday, the Seoul Western District Court ordered the three local broadcasters not to hold or air a debate between the two leading presidential candidates.

The court, seeing TV has a great influence over the public, was granting an injunction to Ahn Cheol-soo, the flagbearer for the People’s Party, who claimed the two-way debate excluding him is unfair.

Following the court’s decision, Lee said he is open to a four-way TV debate to include Ahn and Sim Sang-jung of the progressive Justice Party, which has six parliamentary seats.

But the People Power Party pushed that option to the back, and called for the ruling party to accept the two-way debate they previously agreed on, without airing it on a terrestrial TV channel.

In response, the ruling party said it could have the two-way debate, but urged the People Power Party candidate to accept the four-way debate on TV over the Lunar New Year holidays.

The Justice Party also denounced the main opposition party, and said they should hold the four-way TV debates on the planned date of Jan. 31 in the interest of the voters.

South Korea’s election law mandates the presidential candidates who satisfy certain conditions to participate in at least three TV debates in a timeline designated by the law. Before that, parties can set up debates as long as they have consent from rivals.

The continuing discord is the result of parties’ jockeying for conditions they deem most advantageous to their candidates.

Minor parties have been seeking more media exposure, in an effort to boost their support ratings.

“The court’s denial of the two-way debate is not over whether it is aired or not. The candidates’ debate of the two established parties violates the equality rights for minor parties, and the people’s right to know,” Justice Party said in a statement on Thursday.

In a similar case, a local court in 2007 had granted an injunction filed by then presidential nominee Moon Kuk-hyun of Creative Korea Party against KBS and MBC. The injunction banned airing the debates planned for three other candidates who had garnered support ratings of over 10 percent -- Chung Dong-young of the United New Democratic Party, Lee Myung-bak of the Grand National Party and Lee Hoi-chang, who had no party affiliation.

Gearing up for battle

The People Power Party’s passive attitude toward a four-way debate is likely based on the fear of losing supporters to Ahn Cheol-soo, according to pundits, as there are rumors about the two parties considering merging their campaigns.

“Everyone knows why the People Power Party wants a two-way debate before the Lunar New Year holidays. It wants to prevent Ahn Cheol-soo being talked about during the holiday family gatherings,” Rep. Lee Tae-kyu, head of the election committee at People’s Party, said in a press briefing Thursday.

“It just wants to erase Ahn Cheol-soo out of people’s minds after the holidays.”

The debating abilities of the candidates also appears to be a factor that parties are considering.

Lee, the former governor of Gyeonggi Province and mayor of Seongnam, has proven himself to be a skilled debater, Rep. Kang Hoon-sik of the ruling Democratic Party said in a press briefing earlier.

“It is likely that the opposition candidate could receive a good score by just doing OK (due to lowered expectations).”

For Yoon, a lack of experience in public speaking on political matters appeared to come as a weakness, as he has only recently entered politics after serving as the prosecutor general.

His task lies on persuading voters of his capabilities in dealing with politics and state affairs, a party official said.

Yoon has recruited former KBS news anchor Hwang Sang-moo to help him in the debates, and the party’s election team is preparing answers to expected questions, according to the party.

On the hypothetical question of who would do better in a two-way debate between Lee and Yoon, 54.2 percent chose Lee, while 31.8 percent picked Yoon, in a survey by Realmeter commissioned by YTN. The survey was conducted from Monday to Tuesday.

“We believe that the real battleground for this election would be the televised candidate debates,” Rep. Kang Hoon-sik of the Democratic Party said in a press meeting held on Jan. 18.

The very first TV debate, held in 1997, was largely viewed as a critical factor that led to victory for Kim Dae-jung, of the National Congress for New Politics at the time.

Kim, who had been embroiled in a series of allegations was able to reverse his reputation with his eloquence and rational views against Lee Hoi-chang of the Grand National Party, his prominent rival at the time.

TV debates can also be toxic for candidates, as seen in the case of Ahn Cheol-soo of the minor opposition People’s Party during his previous attempt to become president in 2017.

During the first legal TV debate in April that year, Ahn won himself some nicknames, including “Gap Cheol-soo,” and “MB (Lee Myung-bak) Avatar” -- names he brought upon himself while refuting rivals’ accusations.

Due in part to his performance in the debate, Ahn saw his ratings drop to the low 20 percent range from around 30 percent.

For voters weary of the endless mudslinging and undesirable rumors clouding this year’s presidential election, the TV debates are seen as an opportunity to provide clarity in the vetting process.

In the Realmeter survey, 49.6 percent of the 1,018 adults surveyed said the TV debates will not affect their choice, while 48.4 said it will.

If the parties fail to set up TV debates by themselves, the candidates will have their chance to battle each other during the three mandatory TV debates stipulated by law.

In the Public Official Election Act, eligible candidates are required to engage in at least three televised debates during the “election period,” which begins on candidate registration day and runs to the day before the election.

This year, the three legal debates will be held on Feb. 21, Feb. 25 and March 2, the National Election Broadcasting Debate Commission announced earlier this month.

Each debate will center on three different topics -- the economy, state affairs and social affairs. All three debates will be held at 8 p.m. for two hours, and aired live on KBS and MBC.

The candidates who are eligible to debate in the three occasions are also strictly limited by law.

According to the Public Official Election Act, eligible candidates should fulfill one of the given conditions: they should comes from a political party that has five or more seats in the National Assembly; they should be nominated by a political party that has obtained 3 percent or more of the vote nationwide in elections immediately preceding the presidential election; or they should have an average of over 5 percent of support rating in polls conducted and publicized by the press during 30 days running up to the election period.

If a nominee fulfills one of the given conditions, they are required to attend these debates, unless there is “justifiable grounds” for not doing so.

Accordingly, Lee Jae-myung, Yoon Suk-yeol, and Sim Sang-jeung of the minor progressive Justice Party will be required to attend the three legal debates based on their parties’ Assembly seats.

Ahn Cheol-soo’s People’s Party holds just three seats, but he also qualifies as his support rating hovers in the double-digits.

Huh Kyung-young, a minor candidate of the National Revolutionary Party with representation in the National Assembly, is also likely to be included among the debaters for the TV debates, as he has a support rating of over 5 percent in several local polls.