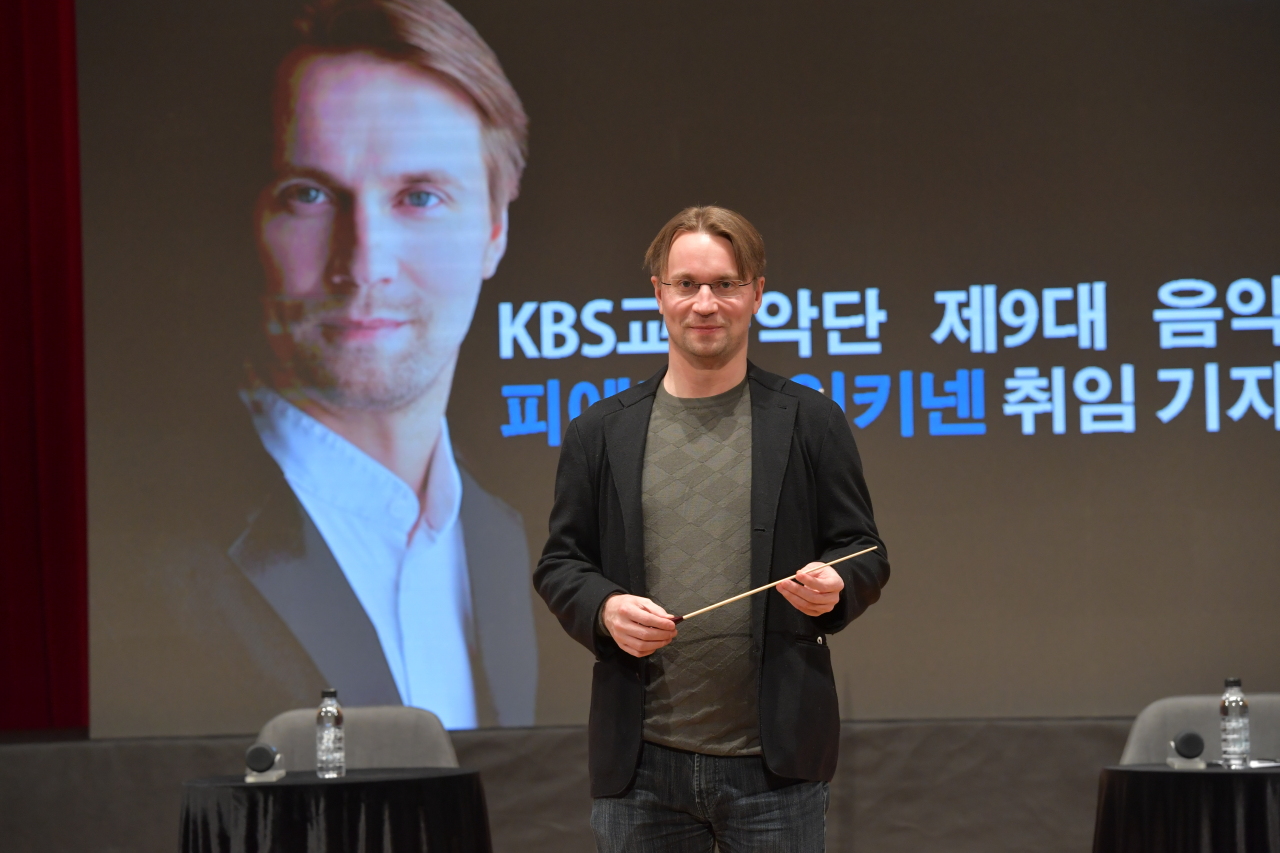 The 42-year-old conductor who officially kicked off his three-year term in January 2022 and has many plans in mind, ranging from more frequent concerts to a music academy for children.

“During the upcoming seasons, I‘d like to increase the number of concerts held across the country, to go and meet with the people face to face and also carry out international tours, hopefully in 2024,” he said.

As the music director, he also wants to foster young music talen“ in South Korea.

“My next big dream is to start the KBS academy to nurture the next generation of musicians -- especially conductors,” he said.

Referred to as one of the success stories of Finland’s fabulous music education, he said he was fortunate to be introduced to conducting at an early age, and he hopes to replicate a similar experience for South Korea‘s children.

He also plans to invite two previous music directors as honorary conductors -- Dmitri Kitayenko, the sixth, and Yoel Levi, the eighth. “That way we can honor the excellent work they have done for the KBS orchestra, and at the same time, children can interact with these legendary conductors at the academy,” he noted.

In addition, Inkinen envisions joint concerts with other international orchestras and also exchanges of musicians, an idea inspired by the Boston Symphony Orchestra conductor Andris Nelsons.

Looking at this year’s program, three of the six concerts he will conduct will feature works by Finnish composer Jean Sibelius, whom Inkinen refers to as “his DNA.”

For the first concert that is taking place this weekend, he will conduct Sibelius’ Karelia Overture, Op. 10 and Lemminkainen Suite, Op. 22, as well as Tchaikovsky’s Piano Concerto No. 1 in B♭ minor, Op. 23.

He will introduce more works by Sibelius at February and October concerts. On Feb. 26, the music director will join forces with Russian violinist Vadim Repin in performing Sibelius’s Andante festivo among others. The Oct. 28 concert will be dedicated to vocal pieces by Sibelius.

When asked if Sibelius‘ music complements the sound of KBS Symphony Orchestra, he said the orchestra members can do justice to Sibelius’ work because “they are open-minded and curious.”

On March 24, the conductor and Australian violinist Benjamin Schmid will perform Erich Wolfgang Korngold’s Violin Concerto in D Major, Op. 35 and Mahler’s Symphony No.7 In E Minor. Inkinen, then will return in September for a concert with violinst Clara-Jumi Kang.

He will wrap up the year with the annual Christmas Eve concert, where he will conduct Beethoven‘s Symphony No. 9, D Minor, Op. 125.

Inkinen first performed with the KBS Orchestra in 2006 when he was invited as a guest conductor.

Returning as the music director, he has several challenges awaiting him. For instance, there are several vacancies, including concert master and principals of some sections.

Filling these positions will be a crucial part of his job, he pointed out, saying that finding the right fit is more important than just filling the vacancy. “Some famous orchestras go many years with vacancies, and then at one audition, you might find the perfect one,” he said.

Inkinen‘s dedication to his work can be summarized by how he speaks about his musicians when asked about his conducting style.

“You should know everything about your musicians -- that’s the only way to try to help make things better,” he added.