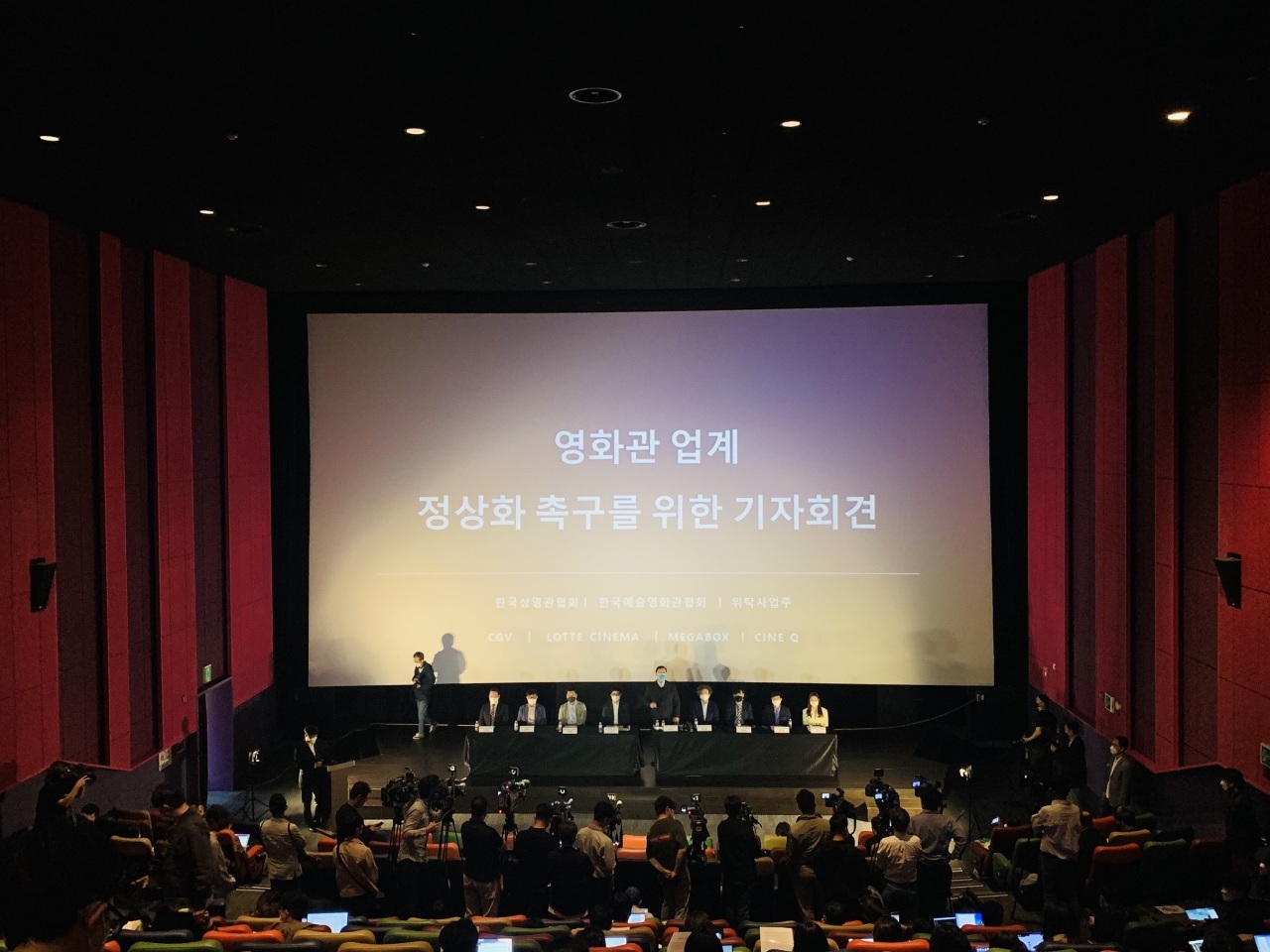 Representatives of local theaters gather at Megabox Dongdaemun in Seoul at a press conference asking for further COVID-19 assistance from the government in May last year. (Korean Theater Association)

The Korean Theater Association on Tuesday released a statement to urge the government to give assistance to local theaters that have been suffering since COVID-19 broke out two years ago.

“We have been complaining about the financial difficulties caused by the pandemic and asked for support for the survival of our film industry, but we have not received any clear answer,” the statement said.

The association especially highlighted the need for support that can encourage local distributors to release Korean films in theaters.

“Before the outbreak of COVID-19, the share of released Korean films in theaters here had been maintained at an average of 50 percent, but in 2021, the proportion plunged to 30.1 percent, down 20.9 percentage points from 2019,” the association said.

Although there are three Korean films -- “The Pirates: Goblin Flag,” “Kingmaker,” and “Special Delivery” -- being released in January, there are not any major commercial films that are scheduled to be released after the Seollal holiday.

The association added that the Korean film industry can also lose its competitiveness if the current situation continues.

In 2022, several Hollywood films confirmed the release schedule of major works, while the domestic film market is still mostly delaying or canceling the release of Korean films, the association said.

“To avoid missing golden hour to save the Korean film industry, the government has to release a support policy.”

In addition, the association noted that it has been working hard on its own to shore up the film industry last year, but it was not sufficient.

During the second half of last year, the association threw a lifeline to two film distributors -- Lotte Entertainment and Showbox -- to encourage the release of their high-budget movies, “Escape from Mogadishu” and “Sinkhole.”

Instead of splitting the ticket sales 50:50 between theaters and film distributors as is standard practice, theaters forwent ticket sales proceeds until the amount reached 50 percent of the two films’ total production cost.

At the time, representatives of the Korean Theater Association held a press conference to ask for more COVID-19 government aid as well.

However, as COVID-19 cases surged again at the end of last year, the theaters had to apply toughen social distancing guidelines again, which only allowed them to operate for a limited amount of hours and did not allow their audiences to eat inside theaters.

“This led to additional sales losses,” the association said.