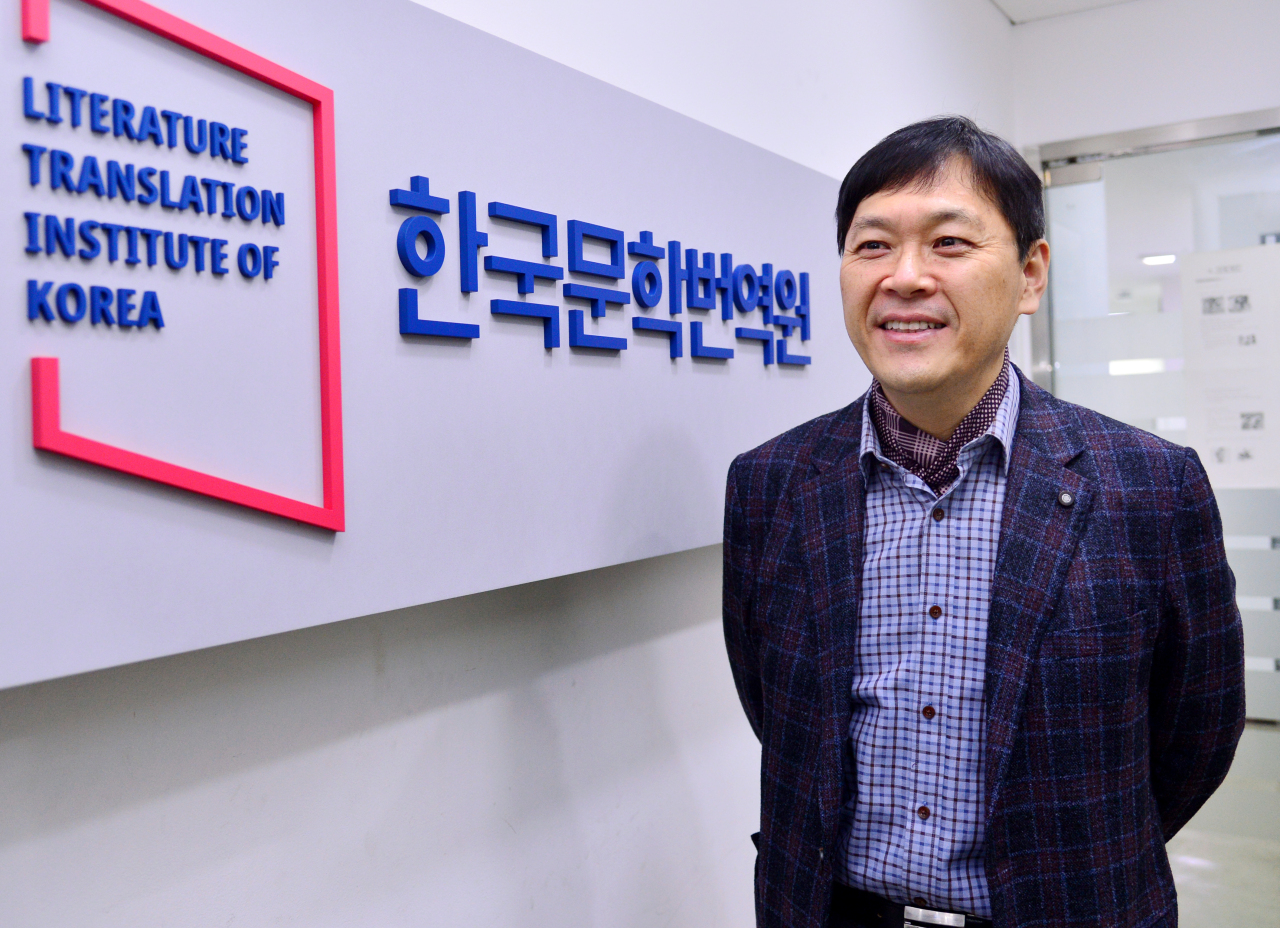 Over the last half-year, Kwak has established a new vision for the organization‘s future, believing that the LTI Korea has a bigger role to play, not only for Korean literature but also in making other Korean content popular internationally. His goals for the organization include transforming it into a comprehensive platform that will aid Korean literature’s global expansion, establishing a new translation graduate school and expanding the boundaries of the LTI Korea beyond literature.

Kwak is eager to accelerate the organization’s transformation, taking advantage of the current cultural landscape, which he views as being crucial to Korean literature’s global expansion.

“Although we began seeing governmental policy support 40 years ago, in response to Japan’s Nobel Prize in literature success, the circumstances have since changed dramatically,” Kwak told The Korea Herald during an interview earlier this month. “Now, at the starting line of Korean literature’s Hallyu, we need to reevaluate our strategy.”

The current situation is quite different from the past, when writers could only dream of their works being introduced to overseas audiences. These days, many publishers around the world are scrambling to get their hands on the latest Korean creative works.

Last year alone, LTI Korea supported the translation of 186 Korean works for readers in 29 countries. Five years ago, that number stood at around 100, and it is expected to reach 200 shortly, he said. Additionally, Korean literature is now being translated into many more languages, including Croatian, Czech, and Finnish, in addition to English, Japanese and Chinese.

Kwak, a poet, has 30 years of experience at the Daesan Foundation, which carries out work similar to that of LTI Korea in the private sector. Run by Kyobo Life Insurance, which also operates Kyobo Book Center, the country’s largest bookstore chain, the foundation promotes Korean literature to the global audience. Although Kwak intended to retire after leaving the organization, he was inspired to establish a new vision for LTI Korea and engrave Korean literature as one of the major literature in the world.

“Although winning a Nobel Prize should not be the main goal for Korean literature, we see it as being possible if we continue to work to better to represent our literature,” he noted, adding that maintaining the quality of translations is one of his goals and for that to turn LTI Korea’s translation academy into a graduate school.

“Even after spending several years studying Korean here, foreigners return home with only a nonaccredited certificate, which shouldn’t be the case,” Kwak said.

“About 80-90 percent of students taking courses at the translation academy are foreigners, which marks a huge increase from the past. What’s more, we are receiving excellent students, who we need to support to ensure that they have job security upon returning home,” Kwak said.

The importance of the art of translation was highlighted when Han Kang and her translator, Deborah Smith, received the 2016 Man Booker International Prize for “The Vegetarian.” It marked the first such win for a Korean literary work. Although the liberties taken in the translated version sparked extensive debate about how much leeway should be allowed when translating a work, the controversy made evident that foreign translators, who are better positioned to translate seamlessly into their native language, are a great force in spreading Korean literature and culture around the world.

The organization recently analyzed statistics concerning all works translated from Korean over the past five years to gain a better understanding of how overseas readers perceive and consume Korean literature, with the aim of developing better strategies for the creation and marketing of future literary translations.

Their recently-published research shows that “Kim Ji-Young: Born 1982” by Cho Nam-joo is the best selling Korean book in international markets, with more than 300,000 copies sold globally. Beyond this, several writers, including Han Kang and Kim Young-ha, have been enjoying growing popularity abroad.

To achieve its goals, LTI Korea has secured a budget of 14.7 billion won ($12.27 million)  this year, up 19 percent from the previous year. Of this, LTI's translation academy has been allocated 4.1 billion won, almost double last year’s 2.1 billion won.

The larger budget also acknowledges the growing responsibilities of the organization, which has been challenged to respond to the rising popularity of other Korean content, Kwak said, adding that “LTI Korea will broaden its scope to encompass any content requiring translation from Korean, including webtoons, dramas and movies.”