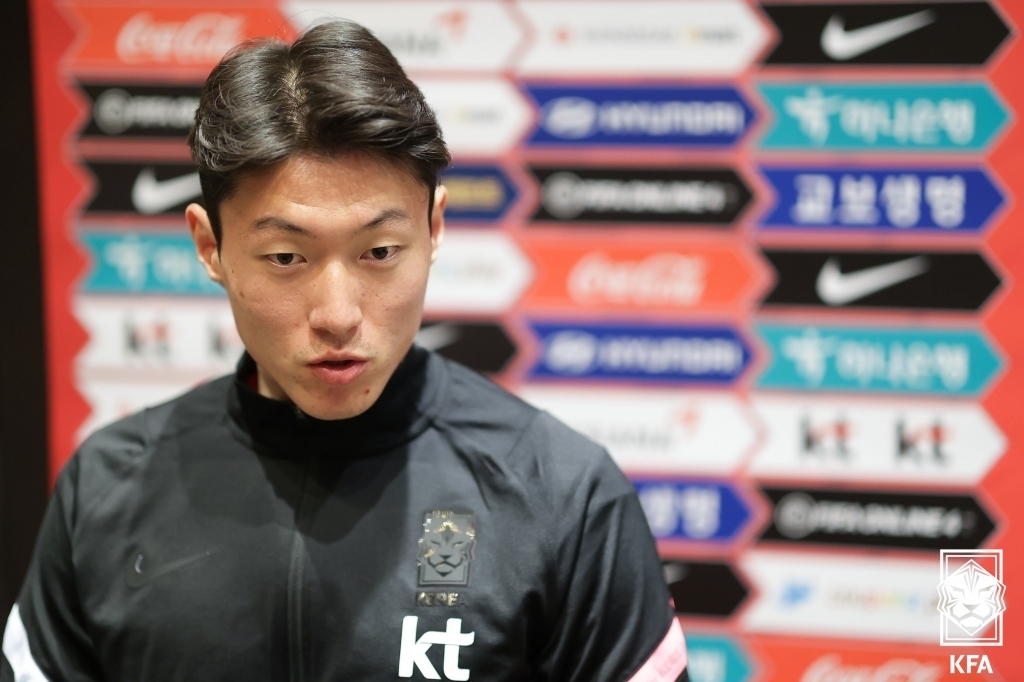 South Korean men's national football team forward Hwang Ui-jo speaks with the Korea Football Association (KFA) in an interview at Wyndham Grand Istanbul Europe in Istanbul on Monday, in this photo provided by the KFA. (KFA)
Since Paulo Bento took over as head coach of the South Korean men's national football team in August 2018, no Korean player has scored more goals than Hwang Ui-jo's 13. After years of relative anonymity, the 29-year-old forward for FC Girondins de Bordeaux has emerged as the go-to striker for Bento, the safety valve that can find the back of the net in desperate moments.

And as South Korea prepare to resume their World Cup qualifying bid this week, Hwang may finally have some worthy opponents in internal roster battles.

Because those matches weren't part of FIFA's international match calendar, European clubs in midseason weren't obligated to release their players, and the likes of Hwang were absent. Bento chose to give two K League forwards, Cho Gue-sung of Gimcheon Sangmu and Kim Gun-hee of Suwon Samsung Bluewings, an extended look for the first time.

Cho, 24, scored his first international goal against Iceland and played another strong match against Moldova. Kim, 26, didn't score but did everything else well as part of a two-striker formation alongside Cho.

"Cho Gue-sung and Kim Gun-hee are two players with good qualities and features," Hwang said in an interview clip shared by the Korea Football Association (KFA) on Tuesday. Hwang joined the team in Istanbul on Monday ahead of away World Cup qualifiers against Lebanon on Thursday and Syria next Tuesday.

"As someone who will compete with them for playing time, I will have to prepare myself well for the upcoming matches," Hwang added.

Cho had four goals in 11 matches for the under-23 national team and has shown a nose for the goal in the K League. Kim, far less heralded, only started getting attention from Bento last fall, but he showed promise as a hard-working, two-way force in the recent friendlies.

Hwang clearly is no slouch himself. He enjoyed his first career hat trick in France on Sunday and with 27 career goals, he is now the all-time leading scorer from Asia in the history of the top French league.

"My confidence is running high," Hwang said. "I am happy to have joined the national team in good form."

Bento has often deployed Hwang as his featured striker but experimented with Cho and Kim as part of the two-pronged attack. Hwang said he should be able to fit into either setup.

"Having two strikers will make our team more aggressive," Hwang said. "If I am the lone striker, I will have more space to roam on offense."

South Korea will need all the offense they can get from Hwang, in the absence of two injured attackers, Son Heung-min of Tottenham Hotspur and Hwang Hee-chan of Wolverhampton Wanderers.

"They are obviously two very important players, and their absences will leave huge holes," Hwang Ui-jo said. "But if the rest of us can step up, we should be just fine."

South Korea are currently in second place in Group A of the final Asian World Cup qualifying round. They can lock down one of two automatic berths out of the group with a win over Lebanon on Thursday.

"We all want to get this done as soon as possible," Hwang said. "We want to have an easier time the rest of the way in the qualification round." (Yonhap)