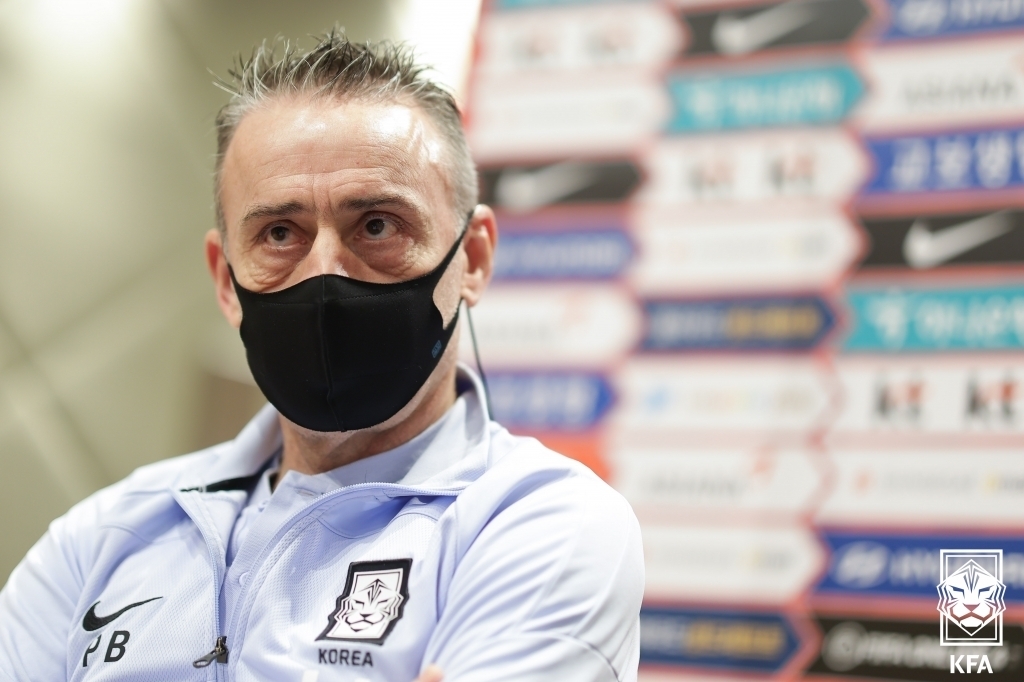 Paulo Bento, head coach of the South Korean men's national football team, speaks with the Korea Football Association (KFA) in an interview at Cornelia Diamond Golf Resort & Spa Hotel in Antalya, Turkey, on Wednesday, in this photo provided by the KFA. (KFA)
With one friendly match down and one more to go before South Korea's World Cup qualifying campaign resumes this month, head coach Paulo Bento wants to keep pushing his players.

"The goal is to compete as well as possible and improve on what we did in the last game," Bento said in an interview clip released by the Korea Football Association (KFA) on Thursday, the eve of South Korea's tuneup contest against Moldova in Antalya, Turkey.

Bento has been running training camp with the national team there since Jan. 9, in preparation for World Cup qualifying matches against Lebanon on Jan. 27 and then Syria on Feb. 1.

Improving on the previous match is a tall task, as South Korea handily defeated Iceland 5-1 last Saturday in Turkey despite not having the services of Europe-based stars.

Those players aren't available for training camp, which isn't part of FIFA's international match calendar and thus doesn't require clubs to release players. Bento named five players from Europe and one player from Qatar and will have them next week.

In the meantime, the 25 players from South Korea's K League and two from Japan's J. League at the Turkey camp are entering the final phase of their battle for roster spots. Bento will make a few cuts after the Moldova match.

"After the game (on Friday) and training sessions on Saturday, we will take the decision. The decision will be based on technical and tactical aspects. Nothing else," Bento said of his roster for the World Cup qualifiers. "We have time to evaluate everything we did during training camp and time to think about the players that had some physical problems. And we'll take the final decision in the right moment."

Though Bento didn't mention any names when discussing players with physical issues, he was apparently referring to two injured Premier Leaguers, Son Heung-min of Tottenham Hotspur and Hwang Hee-chan of Wolverhampton Wanderers.

Both players are nursing lower body injuries. Their respective clubs don't expect them back until February, but Bento has not abandoned his hope of having the two key attackers in the mix for the World Cup qualifying matches.

In case they can't go, Bento wants to ensure the players who will take those spots develop a firm grasp of the national team's system and structure through the two friendly matches.

"The idea (in the Iceland game) was to develop our way of playing and our style, and include some players in our context,"

Bento said. "The goal (for the Moldova game) is the same: to keep integrating players during the week and give them the information about our way of playing." (Yonhap)