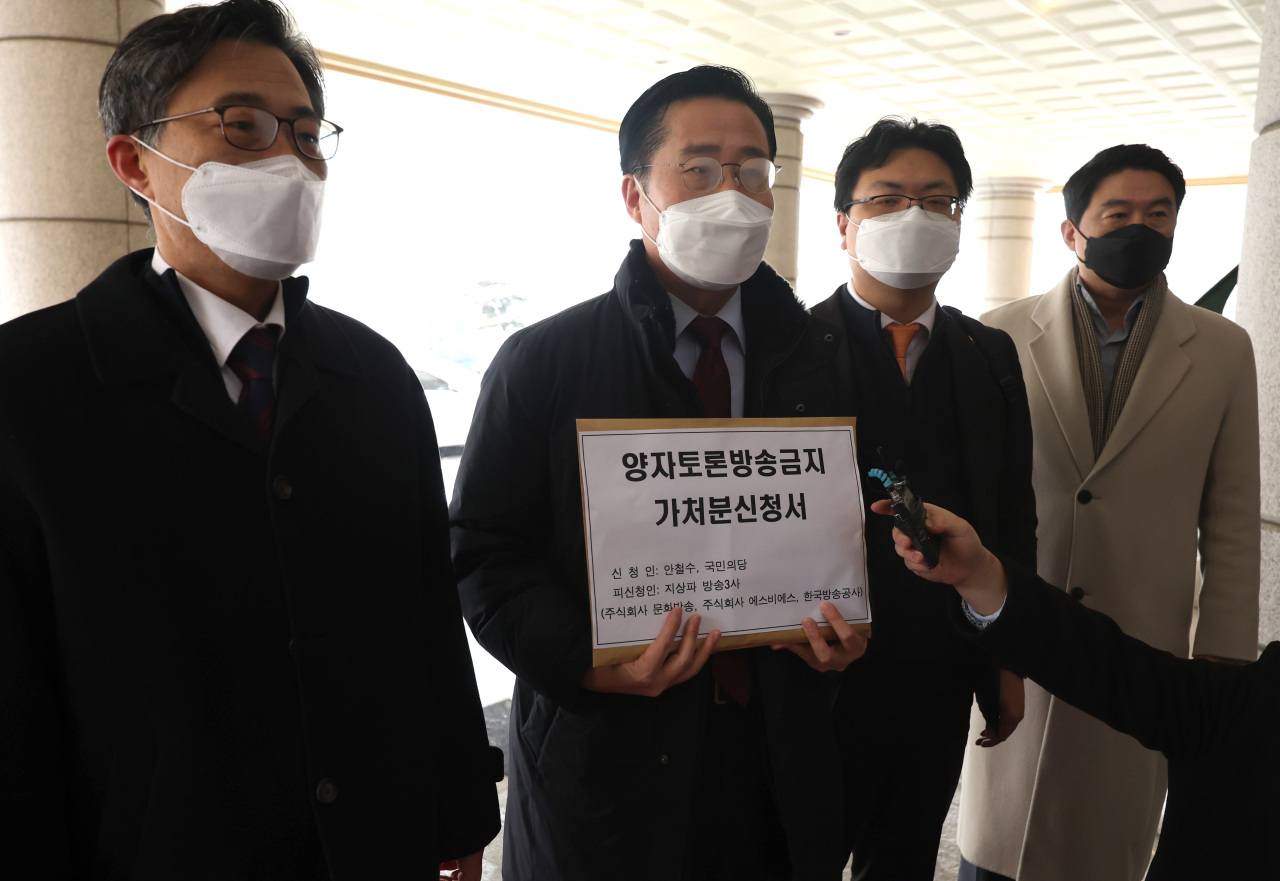 Rep. Lee Tae-kyu, the head of the election committee at People’s Party, files an injunction in Ahn’s name at the Seoul Western District Court, Wednesday. (Yonhap)
The minor opposition People’s Party presidential candidate Ahn Cheol-soo on Wednesday filed an injunction to stop the airing of the TV debate between presidential candidates of the Democratic Party of Korea and People Power Party, protesting the decision to exclude him.

On Wednesday, Lee Tae-kyu, the head of the election committee at People’s Party, filed an injunction in Ahn’s name at the Seoul Western District Court to suspend three terrestrial TV stations KBS, MBC and SBS from airing the debate between Lee Jae-myung and Yoon Suk-yeol.

“I can say that this debate is a vicious act led by two major political parties. The people will have their own assessment about this,” Ahn said on a radio show on the same day.

Though the Democratic Party has suggested holding a four-way debate including Ahn and Sim Sang-jung of the Justice Party after the Lunar New Year holidays, Ahn called this suggestion unfair.

“The votes of those who supported the Democratic Party of Korea despite their dislike of Lee are coming to me,” Ahn said. “Yoon, on the other hand, is scared that he will not be the candidate that can represent the opposition parties.“

Ahn said he would have a stronger lead compared to Yoon when in an alliance.

When asked whether he is saying he would agree to forming a political alliance with Yoon, Ahn said, “Though it is unlikely (of Yoon) to suggest an alliance, if he does, I should step forward for a turnover of political power.”

Meanwhile, Lee Jun-seok, the head of the People Power Party, crossed out the alliance rumors.

“Yoon has not been mentioning an alliance at official events. Making alliances would be a strategy for the second and third runners,” Lee said on a radio show. “Since the reform of the election committee, (Yoon) has been coming in top at most polls.”