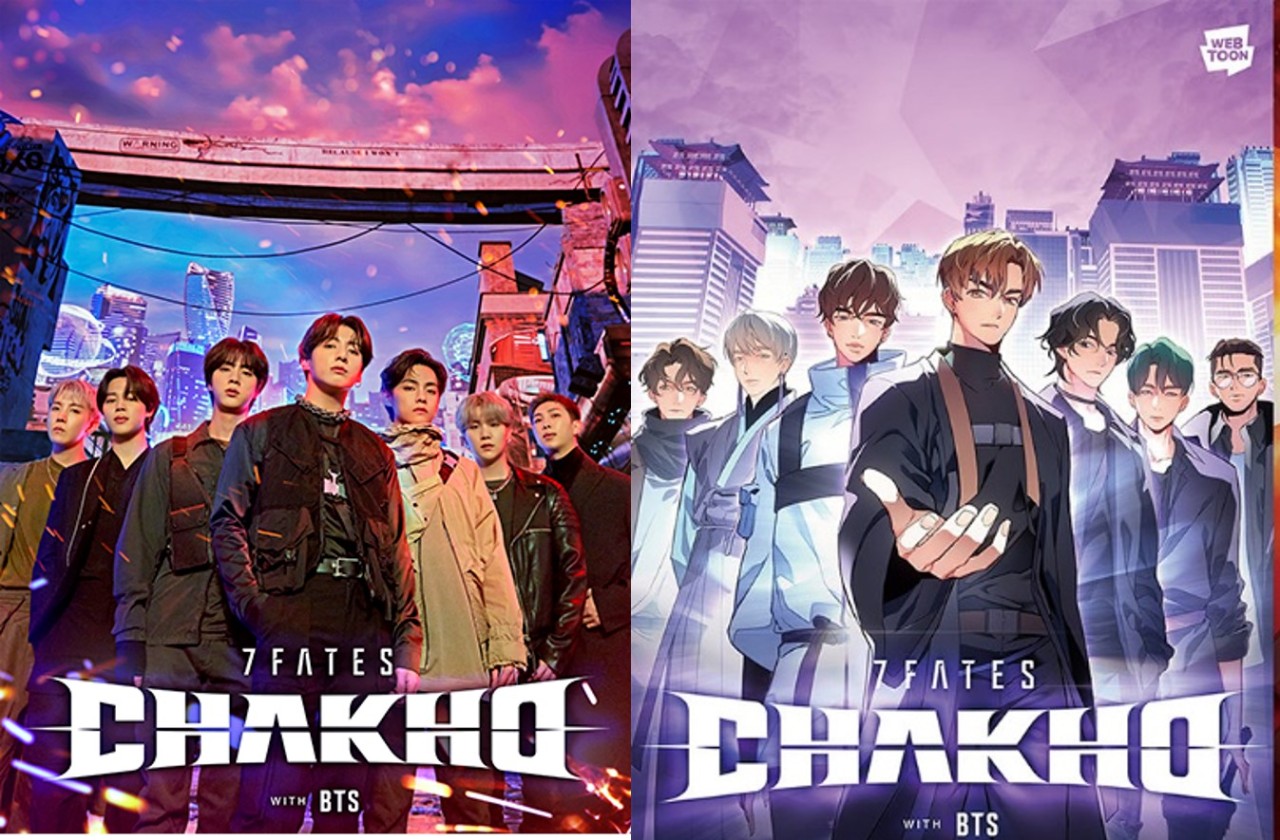 The cover images of web-novel (left) and webtoon “7 Fates: Chakho” (Hybe, Naver Webtoon)
The highly anticipated “7 Fates: Chakho,” a joint webtoon project between Naver Webtoon and Hybe, the K-pop powerhouse behind the superband BTS, is drawing mixed reactions from both webtoon and BTS fans at home and abroad.

The series received a 7.70 rating as of Monday, which is a harsh start considering most of the Naver platform series have ratings above 8.

While many readers were excited to read and learn how the story will turn out in the next episodes, many local webtoon lovers shared concerns about Hybe’s first webtoon project.

“I really think the series is good enough to premiere as its own project, but why did they have to relate BTS? They even changed the names. I wonder why,” a reader commented on the first episode.

“The subject of the webtoon was refreshing, the illustrations were good as well. But I wonder what is the connection between the webtoon and BTS. It seems like Hybe wanted to expand their business in the webtoon industry with BTS as an excuse,” another comment read.

Contrary to the local platform, “7 Fates: Chakho” received a 9.91 rating on Naver Webtoon’s global service platform as of Monday.

“I am sooooooo Happy, Excited & Thrilled right now … Love you Zeha (the character’s name revealed in first episode) The Gorgeous Pretty Golden Boy and the other 6 Amazing,Gorgeous & Great Boys,” said a passionate webtoon reader on Saturday.

The comment attracted 14,198 likes and 26 replies, proving both fans and readers’ love for the series.

“7 Fates: Chakho” is an urban fantasy series, drawn from the tiger hunters, or chakhogapsa, of Korea’s Joseon Dynasty (1392-1910). The series revolves around seven boys who seek to overcome various trials and fight in a chaotic world together to find their fate.

The series will be updated every Saturday in 10 different languages including Korean, English, Japanese and more.