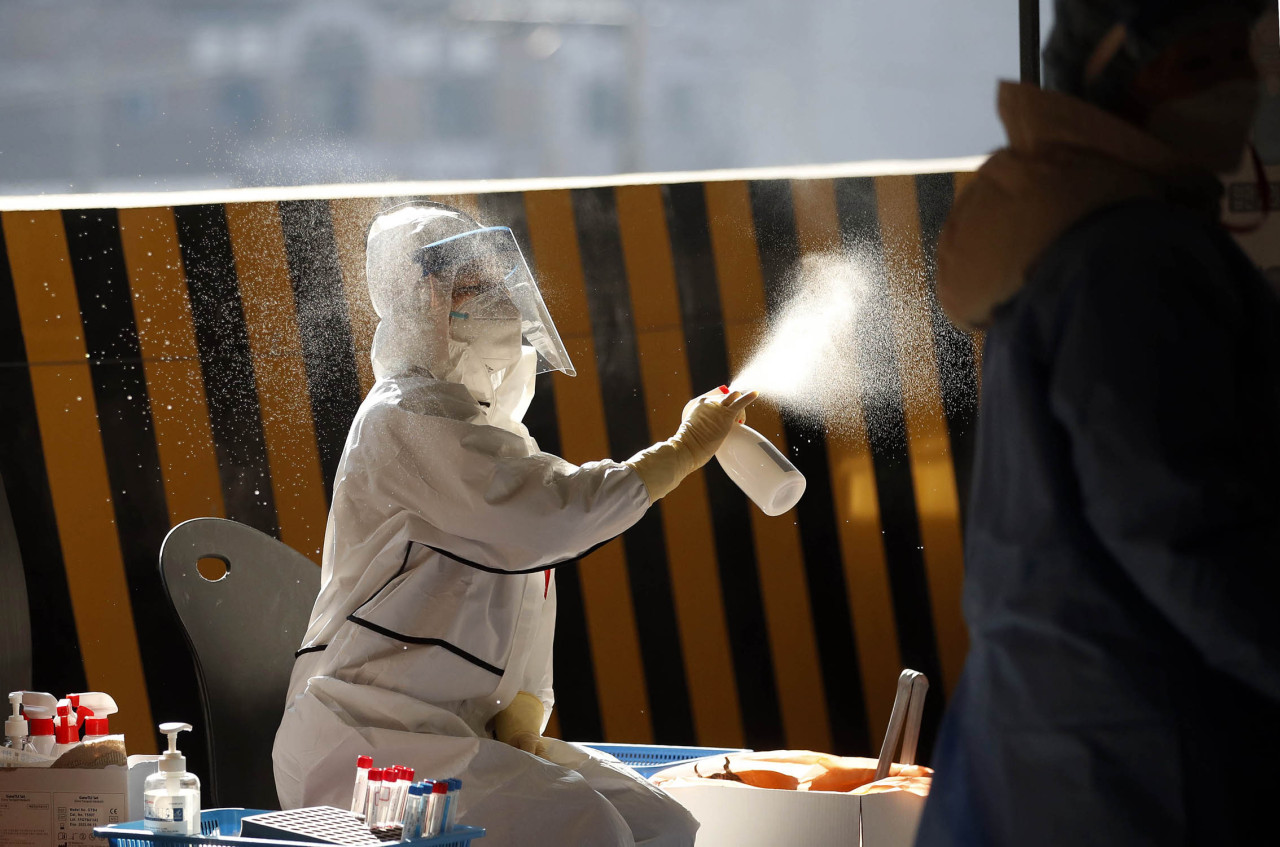 A health worker sprays disinfectant at a makeshift testing station in the southwestern city of Gwangju last Friday, in this photo provided by a local government. (Local government in Gwangju)
South Korea's daily coronavirus cases stayed above 4,000 for the third consecutive day and imported cases reached an all-time high Friday, prompting the government to extend part of toughened social distancing rules for three more weeks.

The country added 4,542 new COVID-19 infections, including 4,133 local infections, raising the total caseload to 683,566, according to the Korea Disease Control and Prevention Agency (KDCA).

The number of imported cases hit a daily high of 409 on Friday amid the spread of the omicron variant across the globe, according to the KDCA.

The health authorities decided to ban all entrants' use of ordinary public transportation upon arrival and tighten rules on the proof of negative COVID-19 test results to stem the inflow of the virus. The measures will go into effect on Jan. 20.

The country reported 49 more COVID-19 deaths, raising the death toll to 6,259, according to the health authorities. The fatality rate came to 0.92 percent.

The number of critically ill COVID-19 patients came to 659. It is the first time that the figure fell below 700 since end-November, the KDCA said.

Also on Friday, the government announced its decision to maintain a 9 p.m. curfew on restaurants and cafes while raising the limit of private gathering size to six from the current four. The revised rules will be in place from Monday through Feb. 6.

The decision came as the number of daily infections has fallen to around the 4,000 level from as high as over 7,000 last month thanks to the tightened antivirus restrictions and the active campaign for booster shots.

Still, concerns linger over a resurgence of the virus due to the Lunar New Year holiday later this month and the fast spread of the omicron variant.

The government decided to designate a special quarantine period for two weeks from Jan. 20, and to implement extra antivirus steps. This year's Lunar New Year falls on Feb. 1 and the holiday lasts until Feb. 2.

During the period, face-to-face meetings at nursing facilities will be banned, and non-contact meetings will be allowed only after prior reservations.

Train tickets will only be sold for window seats, and ferries are highly advised to limit passengers to 50 percent capacity.

Dining in at highway service areas will be banned, the KDCA said, adding that nine temporary COVID-19 testing stations will be set up at highway rest areas, and bus and train stations across the country.

The government also announced a new medical response system to better deal with the virus situation in case the omicron variant becomes the dominant COVID-19 strain and causes a drastic surge in total infections.

"Omicron is expected to be the prevailing strain on around Jan. 21 by taking up more than 50 percent of the total infections. It could pull up the number of daily total infections to as high as 30,000 and the number of serious cases to about 1,700 by around the end of next month," the KDCA said in a release.

The omicron cases accounted for 22.8 percent of the confirmed COVID-19 infections reported from Sunday through Thursday, up from the previous week's 12.5 percent.

Under the new scheme, the self-quarantine period for patients will be shortened from the current 10 days to seven, and the results of rapid antigen detection tests conducted at general clinics will be recognized as an official record.

Local smaller-scale clinics and hospitals will also be designated as COVID-19 treatment centers and will be in charge of caring for patients with mild symptoms.

The government also vowed to push for administering COVID-19 vaccines to those aged between 5 and 11. Some 3 million people are in this age group, the KDCA said, adding that the detailed plan will be announced next month.

The new system will be implemented when the daily tally soars to over 7,000, through which the authorities "will be able to handle the situation in a flexible manner and to help return to pre-pandemic life," the KDCA said.

As of Friday, 43.38 million people, or 84.5 percent of the country's 52 million population, have been fully vaccinated, and 22.42 million, or 43.7 percent, have received booster shots, the health authorities said.

Starting in the day, the government administered US drug giant Pfizer Inc.'s Paxlovid antiviral COVID-19 treatment pills, a day after the first batch for 21,000 people arrived in South Korea.

Patients with a compromised immune system and those aged over 65 are on the priority list, the KDCA said.

South Korea has secured Pfizer's medication for 762,000 people, as well as oral pills made by US drugmaker MSD for 242,000 people, with the second batch of Paxlovid for 10,000 people to be shipped by the end of this month, according to the government.

Meanwhile, the KDCA said it has asked the US Forces Korea (USFK) to provide it with data on daily infections among its personnel to improve transparency and to better respond to the pandemic.

The KDCA made the request during a meeting with the US military Thursday in the wake of the surge in confirmed cases among USFK-affiliated individuals in recent weeks.

"After wrapping up consultations with the USFK, we will release the number of confirmed cases on a regular basis," KDCA spokesperson Ko Jae-young told reporters. "We've also checked hotlines with the USFK to ensure smooth communications at any time." (Yonhap)