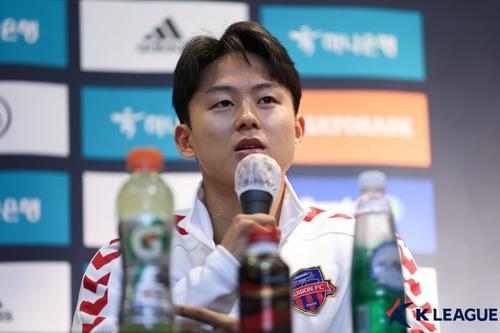 Lee Seung-woo of Suwon FC speaks at a press conference during his K League 1 club's training camp in Seogwipo, Jeju Island, on Tuesday, in this photo provided by the Korea Professional Football League. (Korea Professional Football League)
SEOGWIPO -- After bouncing around multiple European clubs with little success, Lee Seung-woo, a product of FC Barcelona's famous youth academy, has landed with Suwon FC in South Korea's K League 1 with one major goal in mind.

He wants to be on the field more.

"The biggest motivating factor was that I wanted to play more minutes. I wasn't getting much action with my other teams, and that's why I decided to come home," Lee said at a press conference Tuesday during Suwon FC's training camp here on Jeju Island. "Coach (Kim Do-kyun) was really encouraging, and he gave me so much great advice. I didn't have to think that hard about signing with this team."

Lee, 24, signed with Suwon FC on Dec. 3 last year. He was born in the club's home city of Suwon, some 45 kilometers south of Seoul. Suwon FC are getting one of the most popular South Korean football players, a brash attacker who plays with an edge and no shortage of flair.

Lee joined Barca's youth program in 2011 at age 13. He scored 39 goals in 29 matches in his first season there, breaking a record once held by none other than Lionel Messi.

Lee's promising career hit a rough patch in 2014, when he was banned from playing competitive games until his 18th birthday in 2016 because FIFA ruled his signing with Barca had breached its transfer regulations.

Lee made his senior debut for Barcelona's B team in 2016, but he never reached the big club. He would go on to play for a few teams across Europe over the next handful of years -- Hellas Verona in Italy's Serie A from 2017 to 2019, followed by a stint with Sint-Truiden in Belgium and another with Portimonense in Portugal on a loan deal.

Along the way, Lee never quite lived up to his considerable potential, and, with Sint-Truiden, barely got into matches.

Lee said he was confident he still had a lot to show as a football player.

"I believed that I could perform really well as long as I had the trust of the coaching staff," Lee said. "I want to make sure I won't have any regret about making this decision. My teammates have been so helpful in making my transition easier."

Lee was once a part of a trio of South Korean teens all playing in the Barcelona system at the same time. Two other members are back home, too. Paik Seung-ho signed with Jeonbuk Hyundai Motors last year and thrived as a versatile midfielder for the league champions. Jang Gyeol-hee, signed with a third-division club here last February but retired from playing at 23 to take a coaching job on a youth club last week.

Lee said he has kept in touch with Paik and said he congratulated Paik on winning the K League 1 title with Jeonbuk.

"I think he has been rewarded for his hard work," Lee said. "But I didn't decide to come to the K League just because Seung-ho did earlier. I just saw a great opportunity for myself and jumped at it."

Lee said it was difficult for him to predict how his first K League season will play out, since he has only been in training camp for a week, but he doesn't want to limit himself to any statistical target.

"I want to collect as many goals and assists as I can," Lee said. "I want to take this team to a higher place. And everyone dreams of making the national team. If I play well on my club, I think I will have an opportunity to play for the country, too."

Internationally, Lee has represented South Korea across junior and senior levels. He played at the FIFA U-20 World Cup, the 2018 FIFA World Cup and the Asian Games, and the 2019 Asian Football Confederation (AFC) Asian Cup.

Lee has 11 caps for the senior team but none since June 2019. He also missed the cut for this year's Tokyo Olympics.

Suwon FC ranked fifth in the 2021 season and scored the third-most goals among 12 clubs with 53 in 38 matches. (Yonhap)