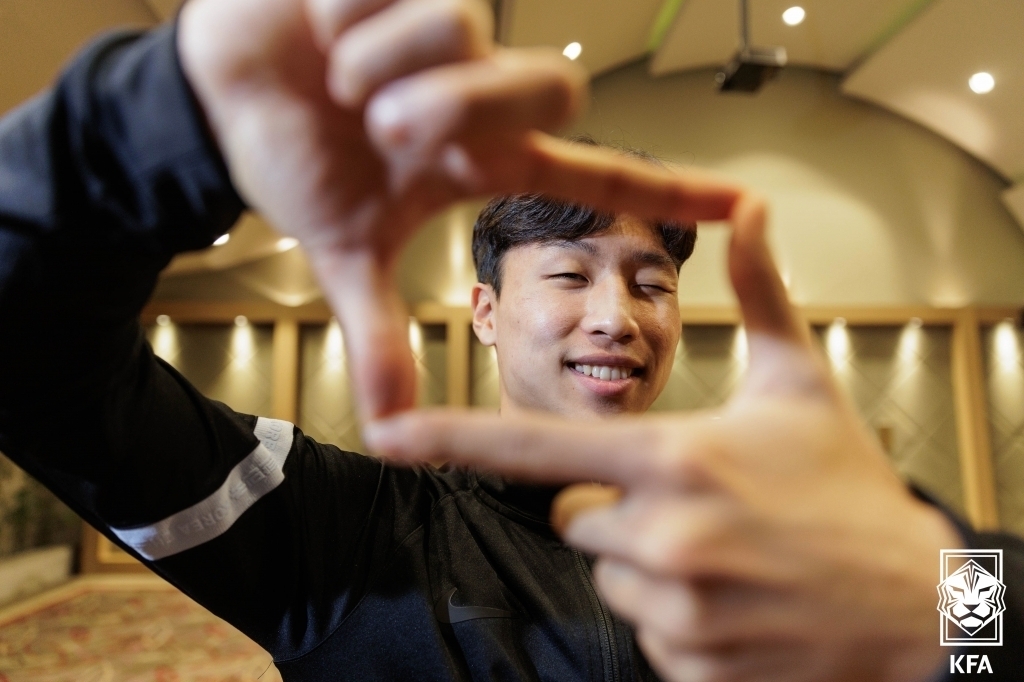 South Korean midfielder Eom Ji-sung imitates the "camera celebration" by his role model, Son Heung-min of Tottenham Hotspur, after an interview with the Korea Football Association (KFA) at Hotel Cornelia Diamond Golf Resort & Spa Hotel in Antalya, Turkey, on Monday, in this photo provided by the KFA. (KFA)
At the tender of 19, Gwangju FC midfielder Eom Ji-sung earned his first callup to the men's senior national football team for January's training camp in Turkey.

The talented teenager stands out for his skills and maturity, but on the other hand, he is no different than most South Korean football players his age in one aspect.

"He has been my role model, and he is the one player that I'd like to meet the most," Eom said, breaking into a sheepish grin, in an interview clip provided by the Korea Football Association (KFA) on Tuesday. Eom and the rest of the 26-man camp squad traveled to Antalya, Turkey, over the weekend for training camp ahead of two away World Cup qualifying matches.

Unfortunately for Eom, Son isn't in Turkey with him. Because the camp has been scheduled outside the FIFA international window, clubs weren't obliged to release their players. South Korea head coach Paulo Bento selected 25 players from the K League and one player from Japan's J. League, with both circuits having completed their seasons.

So what would Eom tell Son if the two finally meet in person?

"I don't think I'd be able to say anything. I will be too much in awe," Eom said with a smile. "I am a shy person, though I've been trying to break out of my shell here and get to know the guys better."

Eom said he would most like to learn off-the-ball movements from Son and would love to have Son's speed. But when it comes to discussing his own strengths, Eom wasn't shy.

"I can shoot the ball from any angle," Eom said. "And I can execute plays in set pieces really well."

South Korea will play two friendly matches this month before resuming their World Cup qualifying campaign: on Saturday against Iceland and then on Jan. 21 against Moldova. Their next World Cup qualifier is on Jan. 27 against Lebanon, followed by the Feb. 1 match against Syria.

Bento will likely call up about a half-dozen overseas-based players for those World Cup qualifying matches, and he is using Turkey training camp as an opportunity to see more K League players and expand the talent pool. Though Eom is unlikely to make the final cut this time, he wants to stay ready for opportunities that he hopes will come his way.

"I am surrounded by so many great players here, and I think I have a lot to learn from them," Eom said. "Even though I am the youngest player here, once we're on the pitch, age doesn't really matter. I am going to wear the national flag with pride and give everything I have." (Yonhap)