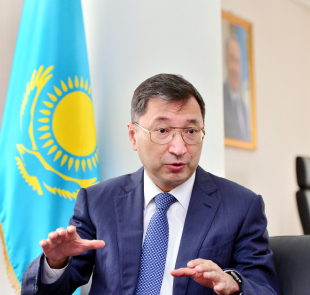 Kazakhstan has been engulfed by anti-government protests over the past week leaving dozens dead and more injured as the authorities seek to quell demonstrations.

According to the envoy, demonstrations over increases in retail prices of liquefied petroleum gas, and their impact on some other socio-economic issues, began on Jan. 2 in the Mangystau region. The Kazakh government promptly responded to demands to reduce gas prices, imposing a moratorium on price increases for socially important food products, fuels and utilities.

However, all major cities of the country followed suit in demanding such measures, and Dyussenbayev said later protests were hijacked by violent groups.

“They did not voice any concerns or demands, and instead tried to violently seize power,” the envoy said.

According to Dyussenbayev, the declaration of a state of emergency is yielding results, constitutional legality is now restored, and the situation in Nur-Sultan, Shymkent, Akmola, Kyzylorda, Pavlodar, North Kazakhstan and Turkestan regions is now stable.

Dyussenbayev pointed to the unity of Kazakh people during this difficult time, saying citizens support the measures taken by President Tokayev to restore peace and establishing communal groups to protect social facilities.

Dyussenbayev showed discontent over the portrayal of President Tokayev’s “shoot to kill” directive by some international media and said directive was clearly taken out of the context.

“Should anyone negotiate with terrorists that undermine public law and order and threaten the lives of the civilian population? Is there any country in the world that has done so? Why should Kazakhstan act any differently,” questioned the Kazakh envoy, stressing that Kazakhstan was doing its best to protect people, adding that exaggerated allegations from some media were not helping.

“We have come a long way to build our state from the scratch. And will do all it takes to protect our democracy and our people from any unlawful interference both at home and abroad,” he added, urging Kazakhstan partners worldwide for support.

“In an increasingly technopolar world, with its new risks and challenges, this situation could take place anywhere,” Dyussenbayev emphasized, echoing President Tokayev’s view that only law and order can guarantee the wellbeing of all civilized states, including Kazakhstan.

According to the envoy, Kazakhstan government’s analysis reveals that Kazakhstan was subjected to armed aggression by well-coordinated terrorist groups trained abroad and there are persons among the attackers who have experience of combat participation in “hot spots” on the side of radical Islamist groups.

“Terrorist groups appeared due to the activation of the so-called ‘sleeper cells,’” he said, adding that he regretted that the law enforcement agencies of Kazakhstan were not ready simultaneously for massive and coordinated attacks in the different regions of the country.

Commenting on the deployment of peacekeeping troops comprising of multinational forces of CSTO member states, Dyussenbayev said they will remain until the stabilization at Kazakh leadership discretion.

Dyussenbayev also referred to legal framework for deployment of CSTO collective peacekeeping forces citing Articles 2 and 4 of the “Treaty on Collective Security” and “Agreement on Peacekeeping Activities” as basis for military assistance requested by Kazakhstan President.

However, the envoy affirmed that 2,500 peacekeeping troops were not involved in eliminating militant groups and terrorists and their major task is protection of strategic sites and administrative buildings.