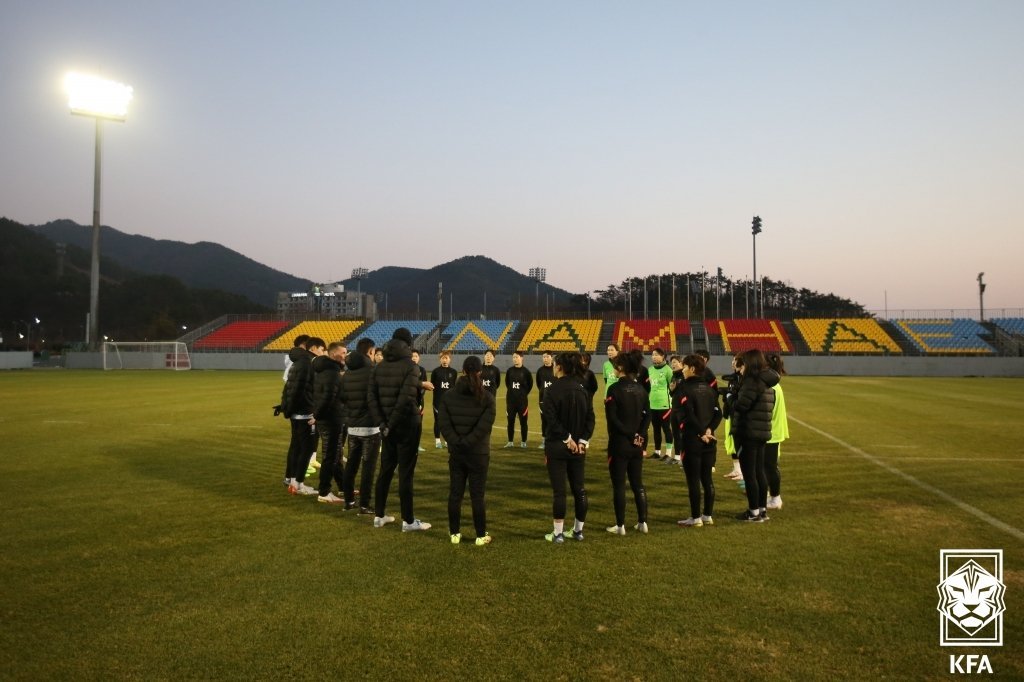 In this file photo provided by the Korea Football Association last Monday, members of the South Korean women's football team prepare for a training session at Namhae Sports Park in Namhae, about 500 kilometers south of Seoul. (KFA)
A trio of England-based veterans, including the high-scoring midfielder Ji So-yun, will try to lead South Korea to their first continental women's football title this month in India.

Ji, South Korean football's all-time leading scorer with 59 goals in 131 matches, will be competing in her fourth Asian Cup.

Cho has 133 caps and she, too, will be playing at her fourth Asian Cup. Lee has appeared in 64 international matches, and this will be her second Asian Cup.

Defender Lee Young-ju, who recently signed with Madrid CFF in Spain, also made the national team.

Head coach Colin Bell opened camp at Namhae Sports Park in Namhae, about 500 kilometers south of Seoul, on Jan. 2 and 25 players have been training. From that camp roster, midfielder Jeon Eun-ha was cut with a foot injury while defender Eo Hee-jin was dropped after breaking a toe. Bell opted to go to the Asian Cup with the remaining 23 players without making further changes.

All three South Korean matches will be played at Shiv Chhatrapati Sports Complex in Pune, about 1,170 kilometers south of Delhi.

There are three groups of four nations in the tournament. The top two teams from each group, plus the two best third-place teams, will advance to the quarterfinals.

South Korea have beaten Vietnam in all 11 meetings so far and have also won all six matches against Myanmar. Against Japan, however, South Korea have only managed four wins against 10 draws and 17 losses.

North Korea are the highest-ranked Asian team in women's football at No. 10, but they won't play this year. Australia are next at No. 11, and they were the runners-up to Japan in each of the past two tournaments. (Yonhap)