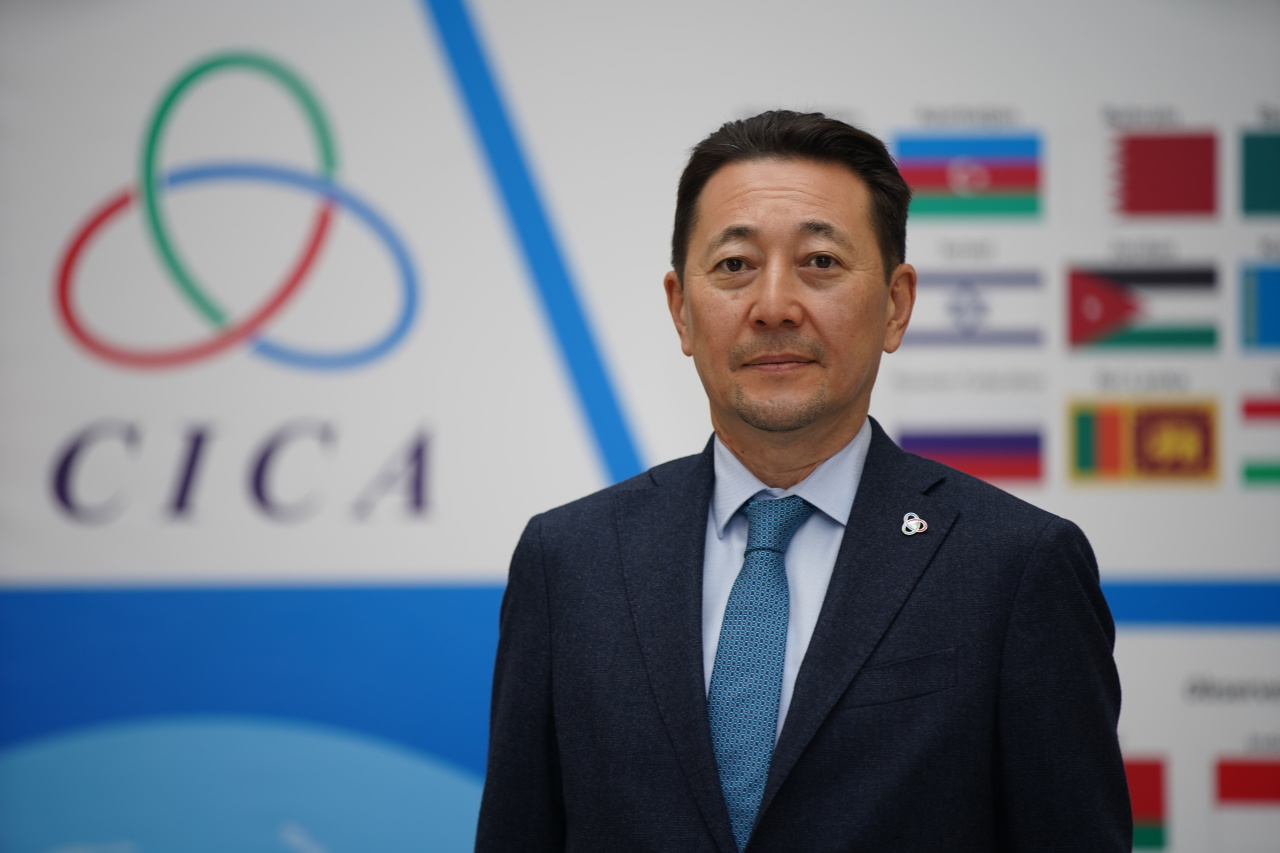 Conference on Interaction and Confidence Building Measures Executive Director Kairat Sarybay (CICA Secretariat)
The head of a pan-Asian peace and security organization expressed its support for cooperation with Korea in key areas and asked it to send diplomats to help with regional efforts for peace and stability.

The secretariat of the Conference on Interaction and Confidence Building Measures (CICA) is committed to supporting Korea in priority areas of energy security and information technology, CICA executive director Kairat Sarybay told The Korea Herald Thursday.

CICA is an intergovernmental forum on maintaining peace, security and stability in Asia based on consensus. It has 27 member states and 9 observer states stretching from the Pacific to the Mediterranean, and from the Urals to the Indian Ocean, creating the vast geographical area.

Foreign Ministers pose for a group photo at the Sixth Meeting of the Ministers of Foreign Affairs of Conference on Interaction and Confidence Building Measures (CICA) and the inauguration ceremony of the CICA new headquarters. (CICA Secretariat)
The initiative was put forward by the first president of Kazakhstan, Nursultan Nazarbayev, at the 47th session of the United Nations General Assembly on Oct. 5, 1992.

CICA member states affirm commitment to the UN Charter and believe that peace and security in Asia can be achieved through dialogue and cooperation leading to a common indivisible area of security in Asia where all states co-exist peacefully and their peoples live in peace, freedom and prosperity.

The executive director introduced Kazakhstan’s facilitation of the new premises of the CICA secretariat in a modern building called Expo to increase international staff capacity. He also invited Korea, an active member of CICA and coordinator, along with other member states to second diplomats for fair and balanced representation at the CICA Headquarters.

“At present, we have diplomats seconded by China, India, Kazakhstan and the Russia who are working for the secretariat,” he said.

CICA’s new office was inaugurated in October in Nur-Sultan within the framework of the Sixth Ministerial Meeting.

Sarybay applauded the Korean government for systemic financial contributions made to the budget of the CICA secretariat, highlighting that Kazakhstan plans to transform CICA, strengthen its capacity, employ more experts and consultants and offer necessary training to the CICA Secretariat.

He hoped that the main part of CICA’s budget, currently supported through Kazakhstan and voluntary contributions from member states would be increased.

According to Sarybay, CICA’s agenda is based on confidence-building measures in military-political, economic, environmental, human dimensions observing new challenges and threats, and The Council of Eminent Persons and the Think Tank Forum adopted during ministerial meeting would offer analytical support in new priority areas of epidemiological safety, public health, pharmaceuticals, and the security and use of information and communication technologies.

Sarybay stressed that Kazakhstan, as chair of CICA is to transform CICA into a full-fledged international organization acknowledging CICA’s increasing relevance and strategic importance due to Asia’s geopolitics.

“Kazakhstan adhered to multilateral diplomacy and proposed a number of international initiatives aimed at ensuring peace and stability in Asia and in the world,” he said, citing CICA, the Congress of Leaders of World and Traditional Religions, the continued absence of nuclear weapons in the Central Asian region and closure of the nuclear test site in Semipalatinsk and the Iran Nuclear Talks hosted by Kazakhstan.

However, Sarybay held the decision would depend upon the political will of member states hoping due consideration in due course.

Recalling Kazakhstan President Kassym-Jomart Tokayev’s transformation proposal of developing CICA into a fully-fledged security system capable of carrying out international mediation and the course of “a New Asia in a New World“ at the Sixth Meeting of CICA Ministers of Foreign Affairs, Sarybay affirmed that proposed transformation would reflect the member states’ commitment to creating a genuinely common, indivisible and comprehensive security area in the largest continent, once proclaimed by all member states in the Almaty Act of 2002.

The most important fundamental document of the CICA, the Almaty Act, was adopted at the first summit of the heads of state and government of the CICA in 2002. That document now acts as the charter of the forum. 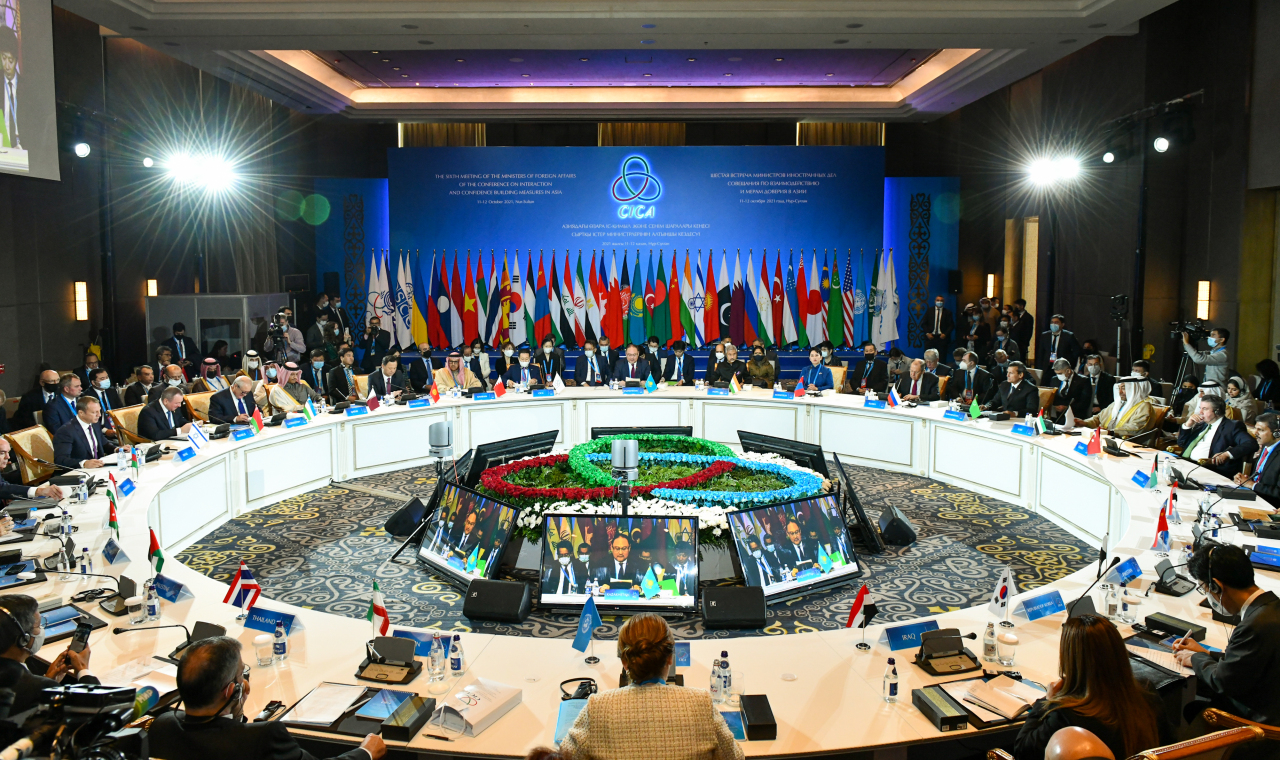 The Ministers of Foreign Affairs of the Member States of the Conference on Interaction and Confidence Building Measures in Asia (CICA) met in Nur-Sultan, Republic of Kazakhstan, on 11-12 October 2021 for the Sixth Meeting of the CICA Ministers of Foreign Affairs. (CICA Secretariat)
Mentioning the challenges faced by CICA, the executive direction stated that CICA unites diverse regions of Asia with different resonance and repercussion compared to other member states having diverging interests.

“The principle of consensus is a very important value of CICA which provides equality of member states in decision-making,” he said, underlining CICA’s role as a dialogue platform for the adoption of decisions on security issues based on consensus.

CICA will mark its 30th anniversary in 2022. The 6th CICA Summit on Oct. 12-13 is the main event scheduled, but CICA will also organize a financial summit in China, working sessions of the business council and youth council, two interactive forums on human rights in Uzbekistan, the first session of the Think Tank Forum, expert meetings and training courses, Sarybay said.