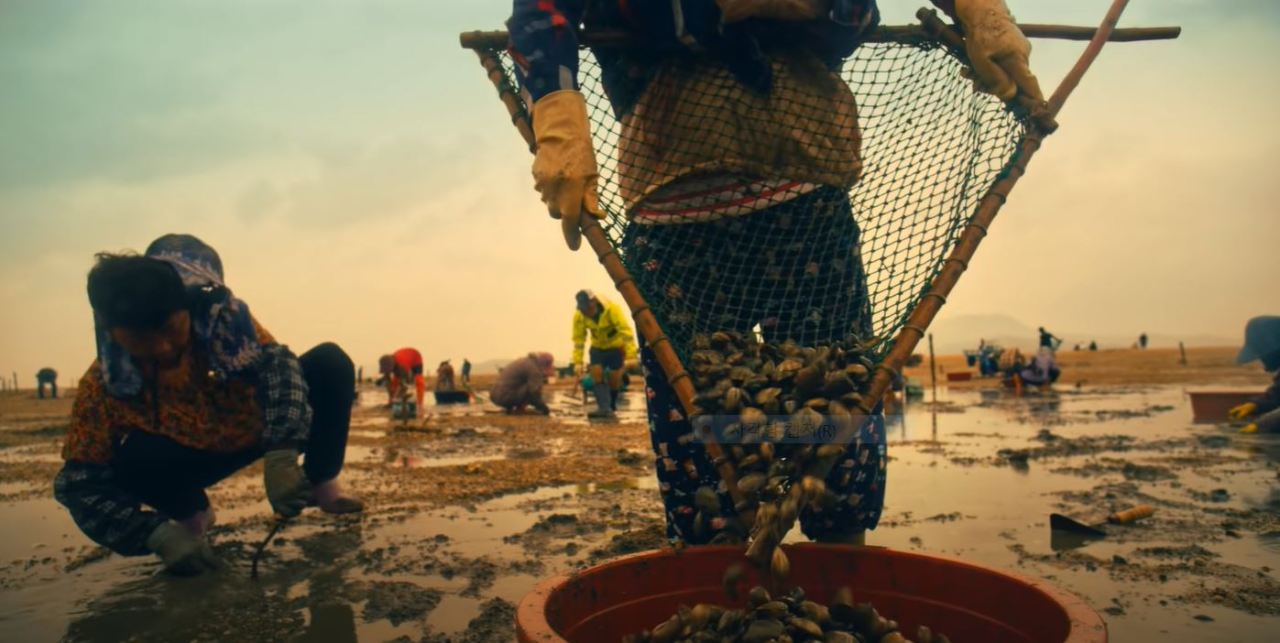 A screen capture of “gaetbeol” scenery from the Korea Tourism Organization’s promotion video (KTO)
Five months since the official designation of Korea’s “gaetbeol,” or tidal flats, as a UNESCO world heritage, “tidal flat harvesting” has made its way onto the National Intangible Cultural Heritage list, the Cultural Heritage Administration said.

Tidal flat harvesting encompasses the traditional knowledge of Korean tidal flats in general, the skills, communal practices, and rites associated with collecting invertebrates in the tidal flats along both the west and south coasts of the peninsula.

Tidal flat harvesting has been positively evaluated for the following reasons -- its time-honored history with active local communities; historical records from the Joseon era; diverse skills and techniques that hold potential for academic research; and unique rites and festivals.

The nation’s coastal wetlands have long provided an important source of living for local neighborhoods whom have made consistent efforts to keep the tidal flats as valuable communal property.

The gaetbol’s biodiverse habitat means locals have been able to harvest a range of seafood, such as clams and oysters, which in turn have also helped shaped the nation’s diet.

Gaetbol harvesting can be performed with either bare hands or tools. Some detailed skills are required in order to meet geological conditions of tides and currents at specific times in the designated area.

The practice of Koreans harvesting marine resources in coastal wetlands date back to the New Stone, Bronze, and Iron ages and all the way to the Goryeo Dynasty.

Historical records on tidal flat harvesting are archived in “Jasan eobo,” a book on seafood from the Joseon period, by biologist Jeong Yak-jeon (1758-1816).

Throughout the harvesting process, various performative rites have been conducted in local regions. A representative tradition, “gaet je,” is a seasonal festival to pray for good harvest. Neighboring community members gather to invite clams, oysters and other sea creatures, pretending as if they are humans.

In addition, there are separate community rituals to predict the estimated yield before harvest season, and celebrations after the harvest as well.

A number of tidal flats in the nation have been designated as UNESCO Biosphere Reserves and also as provincial-level natural parks by the government.

As ecological and social values are increasingly gaining attention, coastal communities have pledged efforts to keep the long-held tradition alive from generation to generation.

Tidal flat harvesting occurs across the western and southern coastal areas, and no particular individuals or organizations will be recognized as holders of the practice.