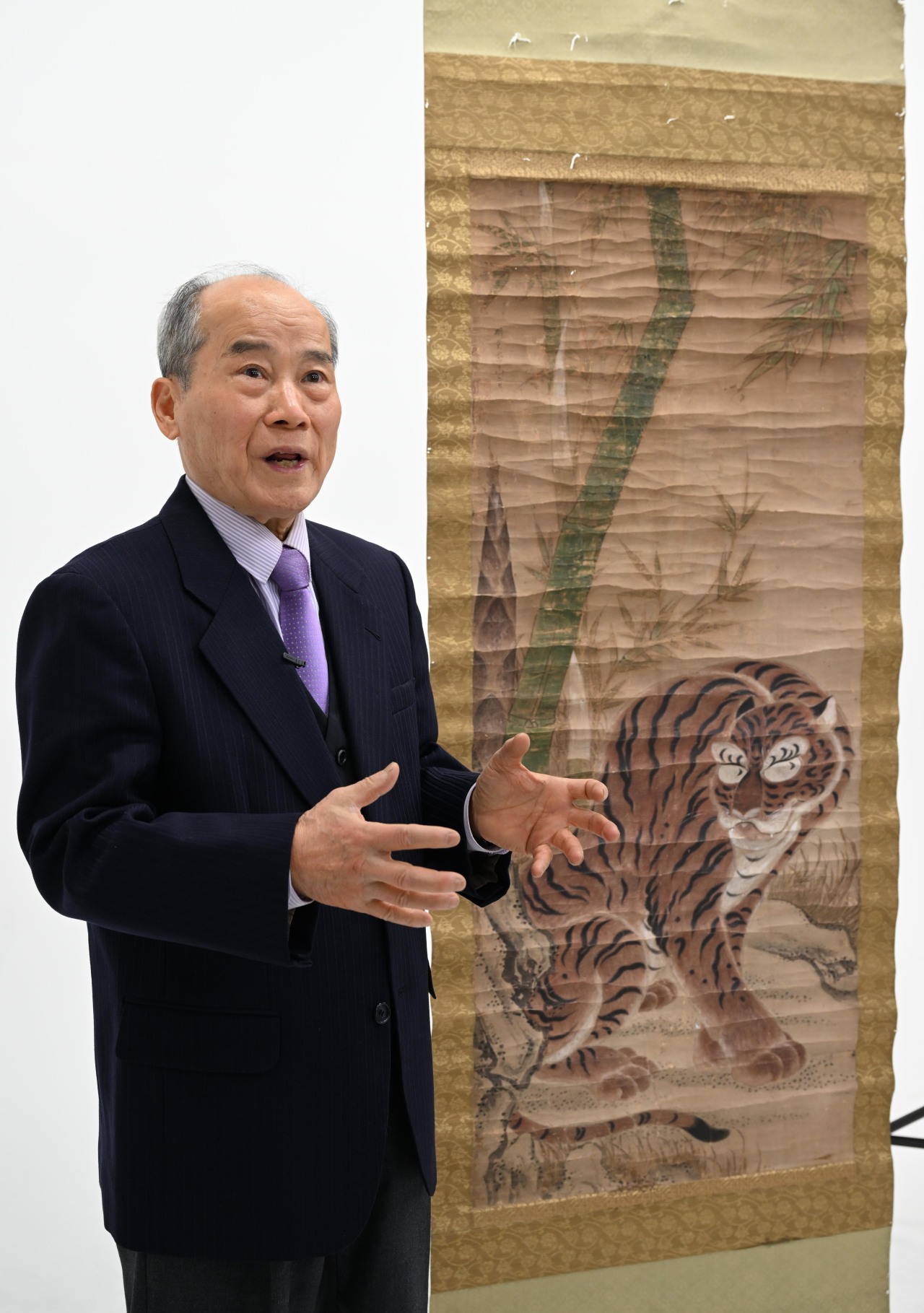 “Painting of Intrepidity” by Lee San, whose pen name is Myeongdang, was unveiled by Lee Young-soo, an emeritus professor at Dankook University at Herald Square in Seoul on Wednesday.
A Korean tiger sits behind bamboo trees, glaring as if it is waiting for the perfect timing to make its move. The tiger, however, looks somehow friendly and mischievous, reflecting the painter’s sense of wit.

The painting was created in the late Joseon era (1392-1910) by Lee San, known by the pen name “Myeong Dang.” It was unveiled by Lee Young-soo, an emeritus professor from Dankook University and a collector of Korean folk painting.

“Painting of Intrepidity” was unveiled Wednesday after an appraisal conducted by the Korea Ancient Art Association. Minhwa, which refers to Korea’s folk painting style, prospered during the Joseon era. The art form, though it originated among commoners, was widely enjoyed among all people regardless of social class.

Minhwa reflects people’s wishes as each drawn object carries its own meaning -- for instance, “Hwajeopdo,” a painting of flowers and butterflies means hope for love and unity between married couples, and “Songwado,” a painting of vegetables and fruits, implies the importance of continuing the lineage of a family.

“Tigers in minhwa usually mean a courageous spirit or can be considered as animals that defeat demons or bad luck,” said an official from the Korea Ancient Art Association on Thursday. In some cases, a tiger is depicted in a funny way as commoners’ criticism of corrupt officials.

The painting was created with natural colors made with ground stones and ground air bladders from fish added to mix the ground stones together, according to Lee.

“The painter seems to have used a slender brush to embody delicate brushstrokes to depict each strand of the tiger‘s fur. It shows how much time and effort the painter has put into the painting. Next year is said to be the Year of the Black Tiger. I hope the painting is widely enjoyed by people,” Lee said. Lee has collected minhwa for more than 50 years.