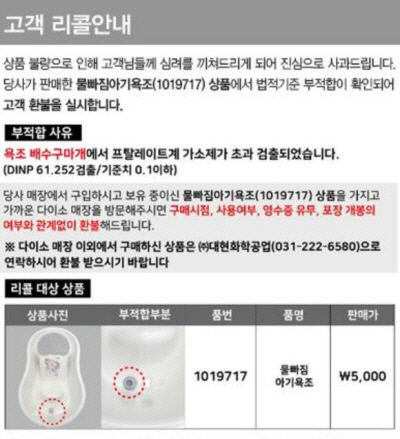 An announcement from Daiso saying it will refund all of the problematic baby bath tub sold at its stores (Asung Daiso)
A local manufacturer and a distributor of a plastic baby bathtub that was previously recalled for containing high levels of toxic environmental hormones will have to pay compensation to thousands of customers.

The Korea Consumer Agency said Wednesday it advised the baby tub’s manufacturer, Daehyeon Chemical, and its intermediate distributor, Kihyun Industries, to pay 50,000 won ($42) to each customer who used the product as compensation.

While the tub was mostly sold at Daiso stores, the discount chain was excluded from liability for damages. The consumer agency concluded Asung Daiso did not intervene in the product’s manufacturing process.

Wednesday’s decision follows an announcement from the National Institute of Technology and Standards and the government last year to recall a 5,000 won plastic baby bathtub sold at Daiso stores. The product was found to have high levels of phthalates, or a type of hormone-disrupting chemicals, which was more than 612 times the safety standard.

Phthalates is a chemical additive used to soften plastic and can cause damages to the lungs and kidneys if exposed for a long period of time.

Back then Daiso said it would refund customers that had bought the problematic tubs immediately after the announcement. Some 4,000 customers filed a collective dispute mediation against the tub’s manufacturer, distributor and end-seller, Daiso. The mediation process began in July.

In addition, consumers have also filed a complaint with the police in February against Daehyeon Chemical and Kihyun Industries accusing them of violating the Special Act on Safety Management of Children’s Products. The group also reported the two firms to the Fair Trade Commission.