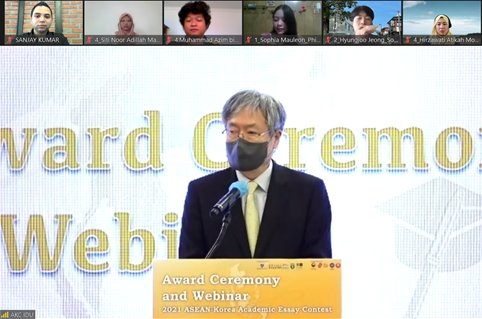 The AKC held its sixth academy essay contest award ceremony and webinar on Dec. 21 via Zoom.

Sophia Mauleon and Alyssa Dalizon, graduate students at the University of Asia and the Pacific, Philippines were awarded the grand prize.

The essay was praised for creative proposals on transforming young people’s mutual perceptions in the 10 members of the Association of Southeast Asian Nations and South Korea in an era of accelerated digital transformation.

Titled “Ready, Set, Action: The Role of Digital Media Tools in Harnessing Youth Power for Greater Cultural Understanding,” the essay acknowledged the strengthened ASEAN-Korea partnership on trade and investment. The essay also identified unbalanced popularity and adulation of culture due to widespread cultural misconceptions and misunderstandings perpetuated through media and inaccurate news reporting.

The essay proposed to increasingly engage the youth in citizen diplomacy measures in the online sphere to foster cultural understanding between ASEAN and Korea. Three main mechanisms were identified by the students to foster cultural awareness and promotion among the citizens of both parties, namely: agenda-setting, presence expansion, and conversation generation. They also recommended crafting a purposeful and interactive digital engagement platform to unify state and nonstate efforts and adopting a neutral framework that would guide cultural promotion efforts.

Congratulating the winners and students at the ceremony, ASEAN-Korea Center Secretary-General Kim Hae-yong highlighted the contest as a platform to motivate the young generation and expand knowledge and awareness of the ASEAN-Korea partnership.

“The students exerted an incredible amount of time, energy and effort for this contest, many of them showcased great ideas and thoughts on ways to develop a more mutually beneficial ASEAN-Korea partnership,” he applauded, adding the contest offered opportunity to academically engage and share perspectives to bolster future relations between Southeast Asia and Korea.

Meanwhile, ASEAN Foundation former executive director Apichai delivered a special lecture on “COVID-19 and building back better through ASEAN-Korea partnership,” followed by a special lecture from former Ambassador of Korea to Thailand Chung Hae-moon on “ASEAN-Korea cooperation for sustainable development in the Mekong region.”

The ASEAN-Korea Center first launched the academic essay contest in 2016 to develop interest and accelerate mutual perceptions among the youth of Southeast Asia and Korea for future regional cooperation.