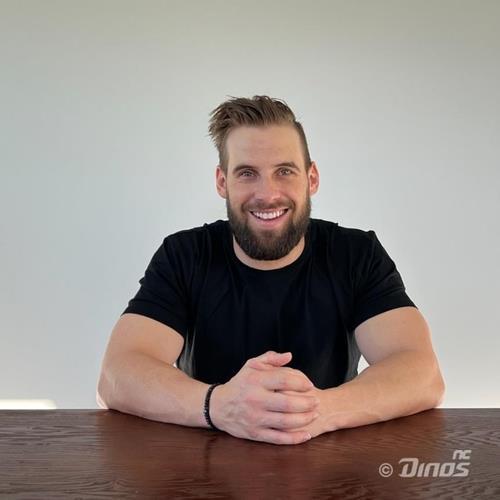 Nick Martini, a new outfielder for the NC Dinos, smiles after signing a deal with the Korea Baseball Organization club, in this photo provided by the Dinos on Tuesday. (NC Dinos)
The NC Dinos filled their foreign player quota for the 2022 Korea Baseball Organization (KBO) season Tuesday, signing a new outfielder while retaining two starting pitchers.

Martini, 31, has 112 big league games to his credit, most recently 25 games with the Chicago Cubs this year. A seventh-round draft choice by the St. Louis Cardinals in 2011, Martini made his major league debut for the Oakland Athletics in 2018. He split the 2019 season between the A's and the San Diego Padres.

Martini will have big shoes to fill. Altherr had 63 home runs, 192 RBIs and 42 steals in his two KBO seasons, and is now said to be eyeing a return to the majors. The Dinos said they've had their eyes on Martini for a few years, and he should add some stability to their defense.

In their rotation, the Dinos will have the one-two punch of Drew Rucinski and Wes Parsons for the second straight season.

The Dinos said the two starters have proven themselves on and off the field with their performance and work ethic, and that they had little trouble re-signing them. (Yonhap)