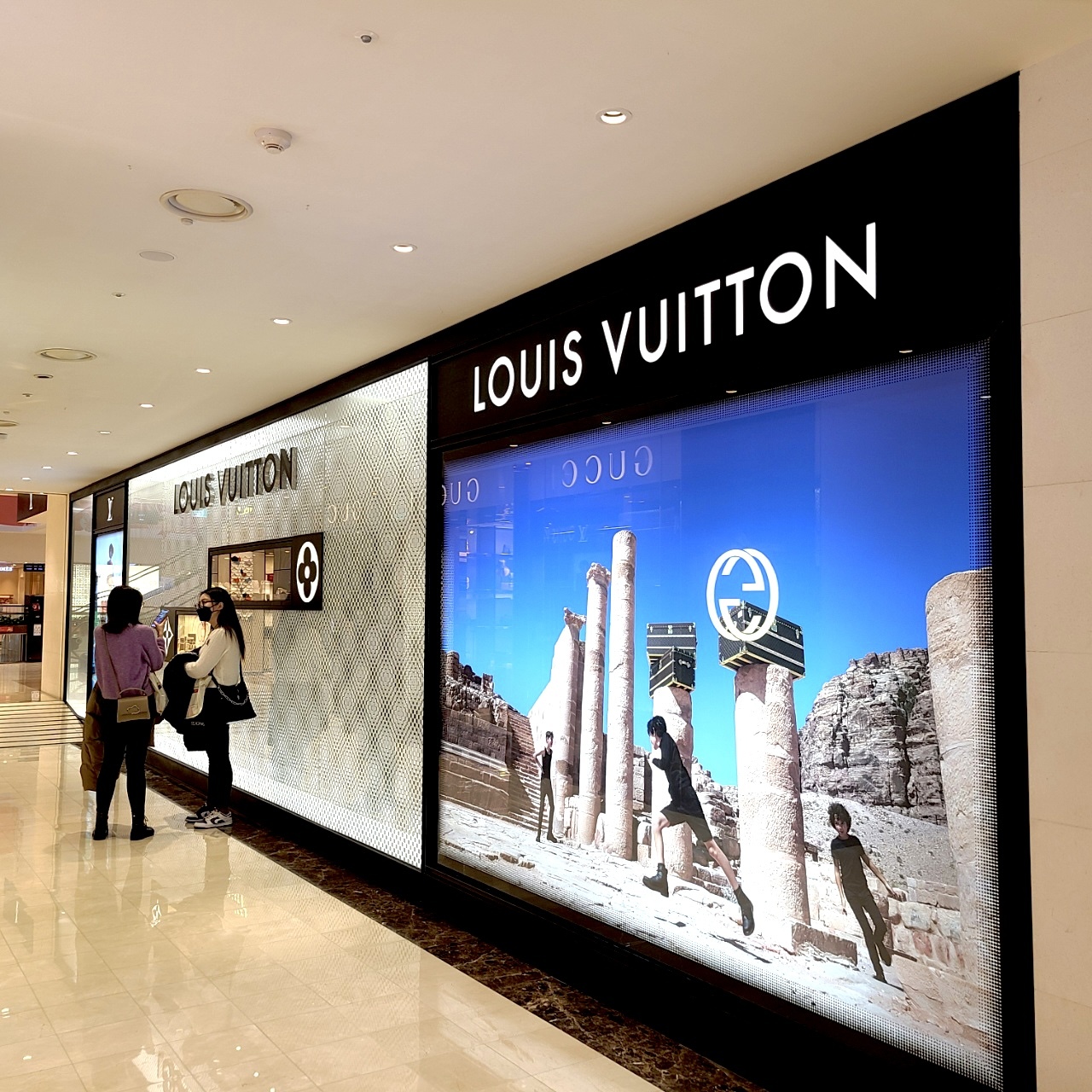 Chinese customers walk pass a Louis Vuitton boutique located in a duty-free store in Seoul. (The Korea Herald/Kang Jae-eun)
Louis Vuitton, a brand that once symbolized the prestige that came along with overseas travel for Koreans, is exiting some duty-free stores in Korea, according to multiple officials in the industry.

“Louis Vuitton announced mid this year it will pull out of all Korean duty-free stores operating in the city. It’s unclear exactly when, but we expect it will be around the end of the year to early 2022,” said one official from a local duty-free operator who requested anonymity.

Another executive who previously worked at a top luxury fashion brand said Louis Vuitton “seemed to have stopped providing new products” to its duty-free city stores.

Louis Vuitton has four duty-free retail units in Seoul, one in Busan and two on Jeju Island. It was not clear if the company is planning to pull out of all of the city locations, while it appears set to remain at Incheon Airport.

The move from the French luxury house is a signal that local duty-free stores may no longer be an attractive sales channel for luxury brands due to their heavy dependence on Chinese resellers who purchase products in bulk and sell them back home through e-commerce platforms like TaoBao.

“The problem right now is the attitude change from global brands. I am not sure if they will be favorable to Korean duty-free stores that sort of turned into a parallel importer for Chinese merchants,” said analyst Park Jong-dae from Hana Securities.

A top brand like Louis Vuitton leaving the industry could have a domino effect, officials say, since it could motivate other high-end brands like Chanel or Tiffany & Co. to leave too, and eventually weaken the competitiveness of Korea’s duty-free industry as a whole.

Sales from local travelers have neared zero over the past two years, and the Korean duty-free industry’s dependence on Chinese merchants has become bigger than ever.

According to data from the Korea Duty Free Association, local duty-free retailers recorded 1.77 trillion won ($1.49 billion) in sales, of which 96.4 percent came from global customers -- mostly individual resellers from China.

Retailers acknowledge the harm Chinese merchants have on the industry as products sold on third-party sites or unofficial channels could hurt the brand’s luxury image and identity the companies have tried so hard to maintain. The more Chinese resellers buy from Korean duty-free shops, the higher risks luxury brands face in controlling the product distribution, observers say.

But for duty-free operators in Korea, Chinese resellers are important for now as they are the key source of income, considering travel limitations under the pandemic and the many government restrictions in place for local consumers.

Under the current customs law, Koreans are only allowed to purchase up to $5,000 at duty-free stores, a figure that has been unchanged for 43 years. The limit was intended to promote modest shopping in the past when the government restricted locals from traveling abroad.

“The duty-free limit increased only $200 over the past 33 years. The amount of increase is too small compared to the increase in national income and outbound travelers during the same period,” said one industry official.

Industry officials say there is much more room for domestic sales to grow if the cap is raised to an amount that meets Korea’s national income, which has grown 9 percent over the same seven-year period.

The amount is also far below the spending power Korean consumers have, they explain. Korean consumers bought on average $1,375 of duty-free goods when the government temporarily allowed duty-free shopping for passengers of nonlanding flights this year, according to data provide by Lotte Duty Free, the largest duty-free operator in the country. The average amount purchased was more than double the current cap of $600. 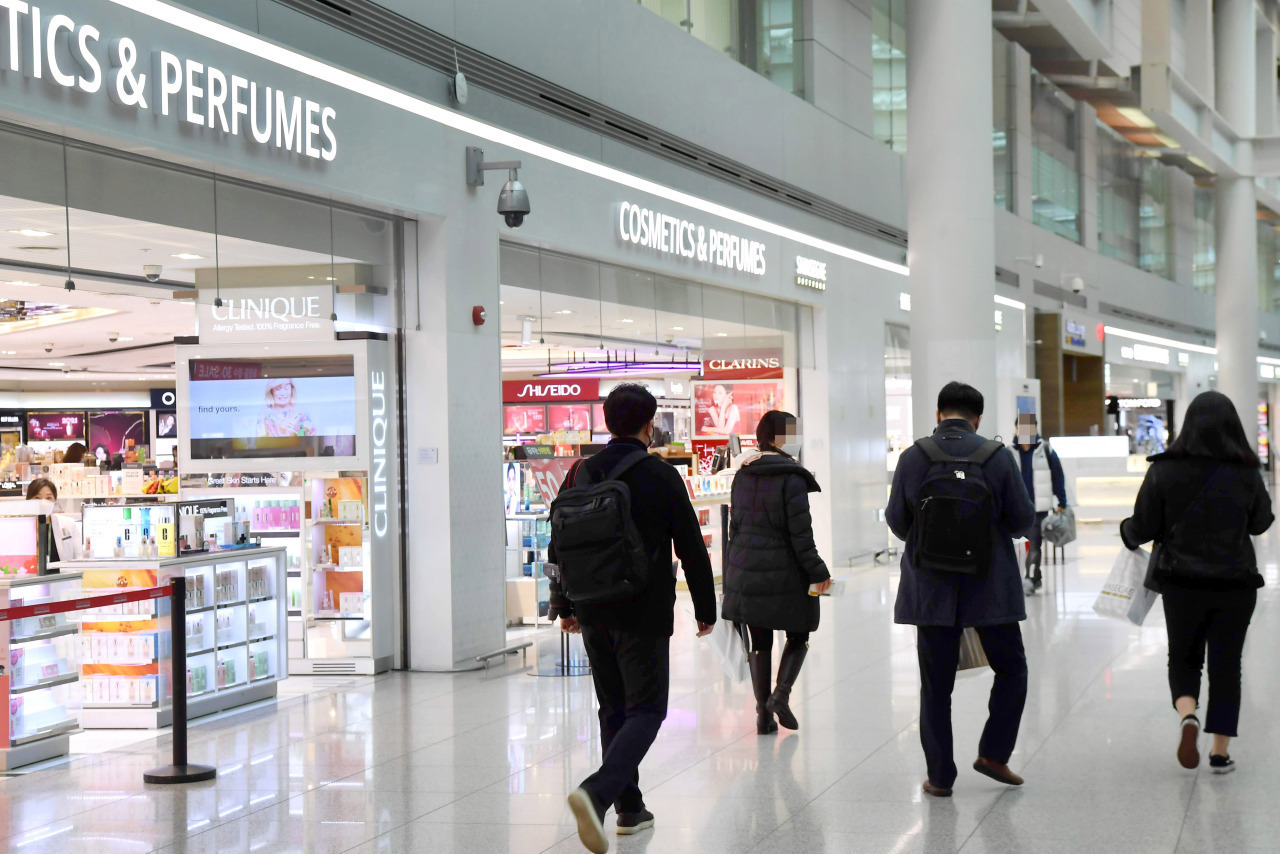 Duty free China on the rise

Since earlier this year, Beijing started giving exceptional benefits to duty-free retailers. It raised the duty-free limit at Hainan, a popular tourist destination in China, to 100,000 yuan ($15,700) per person to motivate domestic spending.

State-owned China Duty Free Group, which operates some 95,000 square meters of duty-free establishments in Hainan, saw its sales go up 127 percent on-year in 2020. China Duty Free Group quickly leveled up to No. 1 in sales in 2021, surpassing Lotte Duty Free, albeit in a shrinking global duty-free market during the pandemic.

As China closely chases Korea in duty-free retail, the duty-free industry, Incheon Airport and the Korea Customs Service have been engaging in talks with the government to raise both the duty-free limit and purchasing cap per person.

The Ministry of Economy and Finance said Monday the government will drop the $5,000 purchasing limit at duty-free stores next year as a means to boost domestic spending, though the duty-free limit of $600 will remain unchanged.

With retail sales dropping, some have looked to e-commerce and other sales channels for a breakthrough.

The top three most popular luxury fashion brands -- Hermes, Chanel and Louis Vuitton -- however, are not available on the website.

Others are strengthening their international channels.

Shilla Duty Free partnered with China’s Hainan Tourism Duty Free City in July on a joint venture. The move is part of the retailer’s effort to overcome sluggish domestic sales, while preparing for the post-COVID-19 era.

“We are trying to overcome difficulties in the local duty-free market by penetrating into overseas markets,” said an official from Shilla Duty Free.