CJ CheilJedang’s vegan dumplings and kimchi (CJ CheilJedang)
Plant will become the new beef on our dinner tables soon, with more Korean food companies coming up with their own versions of plant-based meat alternatives to cater to global vegan population of some 79 million and growing.

CJ CheilJedang said Sunday its launching a vegan brand called PlantTable due to a growing interest in vegetarian food here in Korea and around the world.

The food company said it will launch two types of vegan Bibigo Dumpling products in Singapore and Australia sometime this month. The dumplings use a meat replacement made out of soybeans known as textured vegetable protein, explained a company official.

The products have already been available via e-commerce platforms since Friday here in Korea.

Along with its first-ever vegan dumplings, CJ is also introducing vegan kimchi, which does not use any jeotgal, or salted seafood.

Saying the two products are just the “tip of the ice berg,” CJ plans to expand its vegan product lineup next year with the goal to enter the United States, Europe and halal markets.

“We are planning to expand our vegan product offerings on a full scale next year, and launch vegan versions of home meal replacement products too,” said a spokesperson for CJ CheilJedang. 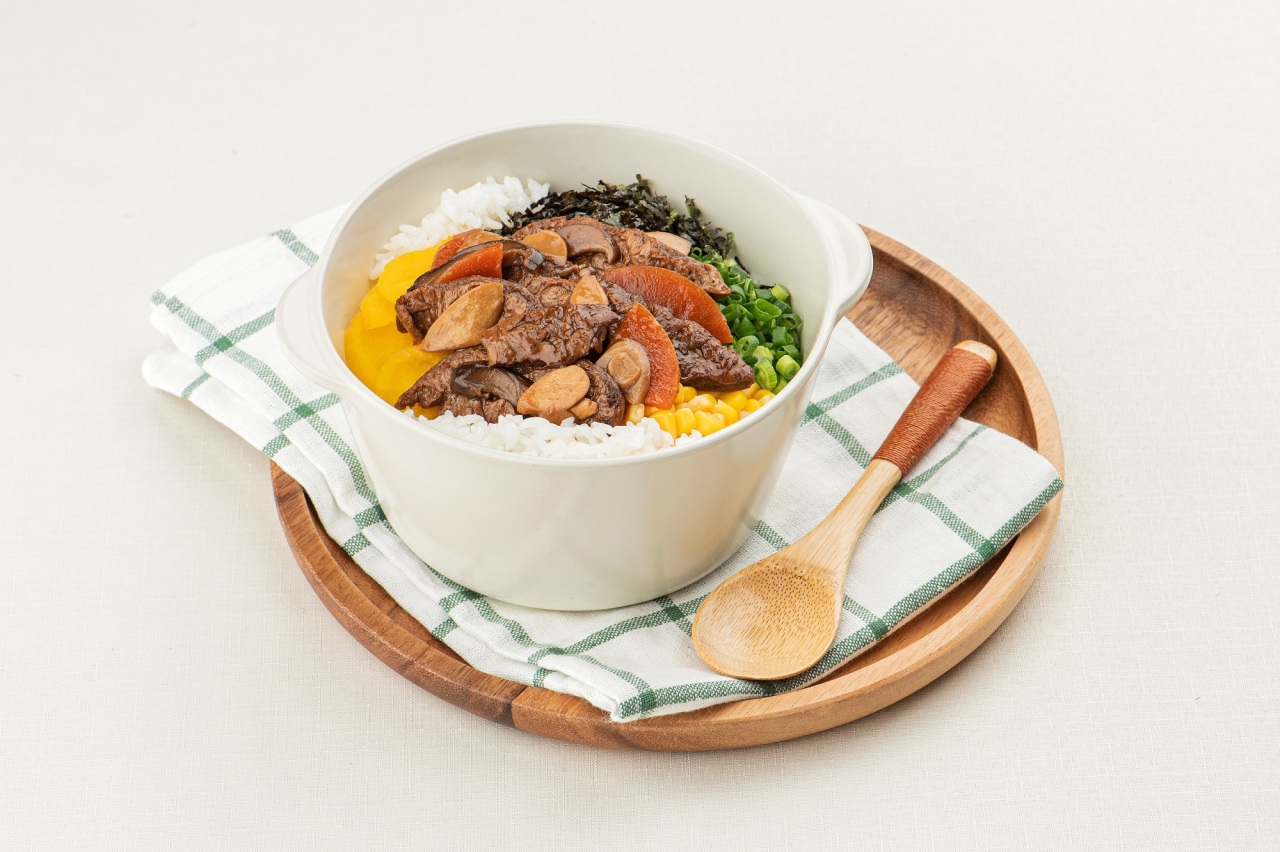 One example is an array of ready-made bulgogi products from Pulmuone, which use soy-based textured vegetable protein. The products are receiving positive feedback from consumers since its launch in November, the company said.

The tofu maker is also making inroads in the United States, considered one of the most advanced and competitive markets for alternative meat products. There, the likes of soy-egg from Just Egg and plant burger patties from Impossible Food are commonly eaten and used at restaurants across its 50 states.

Late this year, Pulmuone’s US branch inked a deal to supply its alternative meat products to 200 locations of WaBa Grill, a California-based stir-fry restaurant chain.

Some food companies have taken the vegan trend a step further, and decided to open restaurants using only plant-based meat alternatives and vegan sauces.

Korean ramen and snack maker Nongshim said this month it will open a vegan restaurant inside the Lotte World Tower building in Jamsil, southern Seoul, in April next year.

It’s offerings, such as the rigatoni ragu pasta and double cheese avocado burger will be made with plant-based meat and sauces from Nongshim’s vegan brand, Veggie Garden, it said.

“We are seeing more value-conscious customers paying interest to vegan food and its capability to reduce greenhouse gases. We believe consumer interest on vegan food will increase along with the expansion of vegan markets,” said an official from Nongshim. 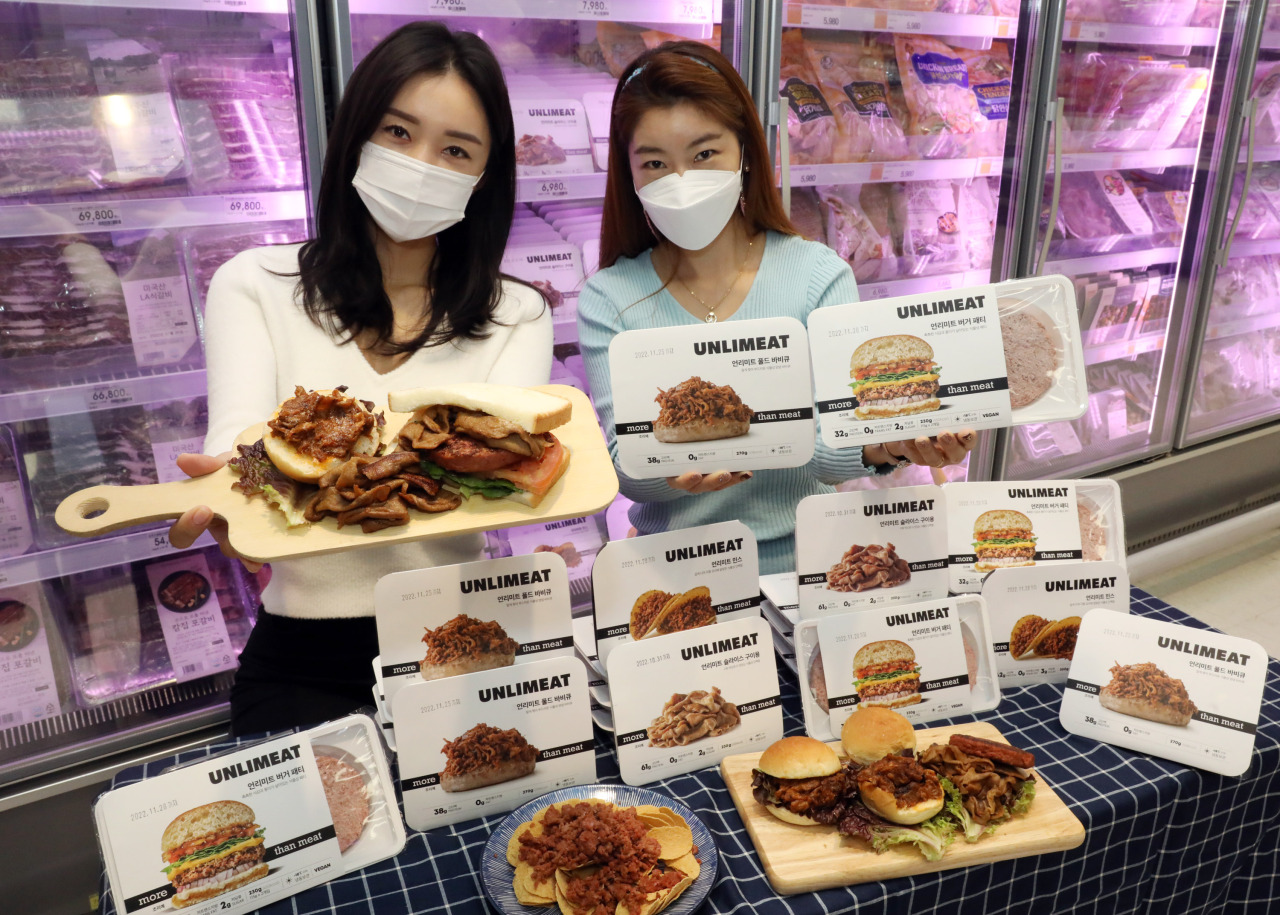 Models pose with Unlimeat meat replacement products, which was made available at Emart stores starting early December. (Yonhap)
The market for plant meat replacements is at its beginning stage, says industry officials. But the race to develop innovative vegan meat replacements that resembles the taste, smell and texture of real meat is expected to heat up even more, especially as more young Koreans accept veganism as a life style choice.

As of this year there is an estimated population of some 2.5 million vegans and vegetarians in Korea. This is a 66 percent increase from 2008, statistics from the Korean Vegan Union showed.

Such change in preference has motivated the government to up its investment in the research and development of alternative protein. More than 4.5 billion won ($3.79 million) has since been invested by the government into startups that develop alternative meat-like plant-based protein or lab-grown meat, a four-fold increase from 2016.

The market for alternative meat is projected to expand as well. According to the Korea Agro-Fisheries & Food Trade Corp. data, the market is expected to reach 7 trillion won in 2023.

The Korea International Trade Association even predicts plant-based meat will surpass the market share of animal meat, accounting for more than 60 percent of the global protein market by 2040.