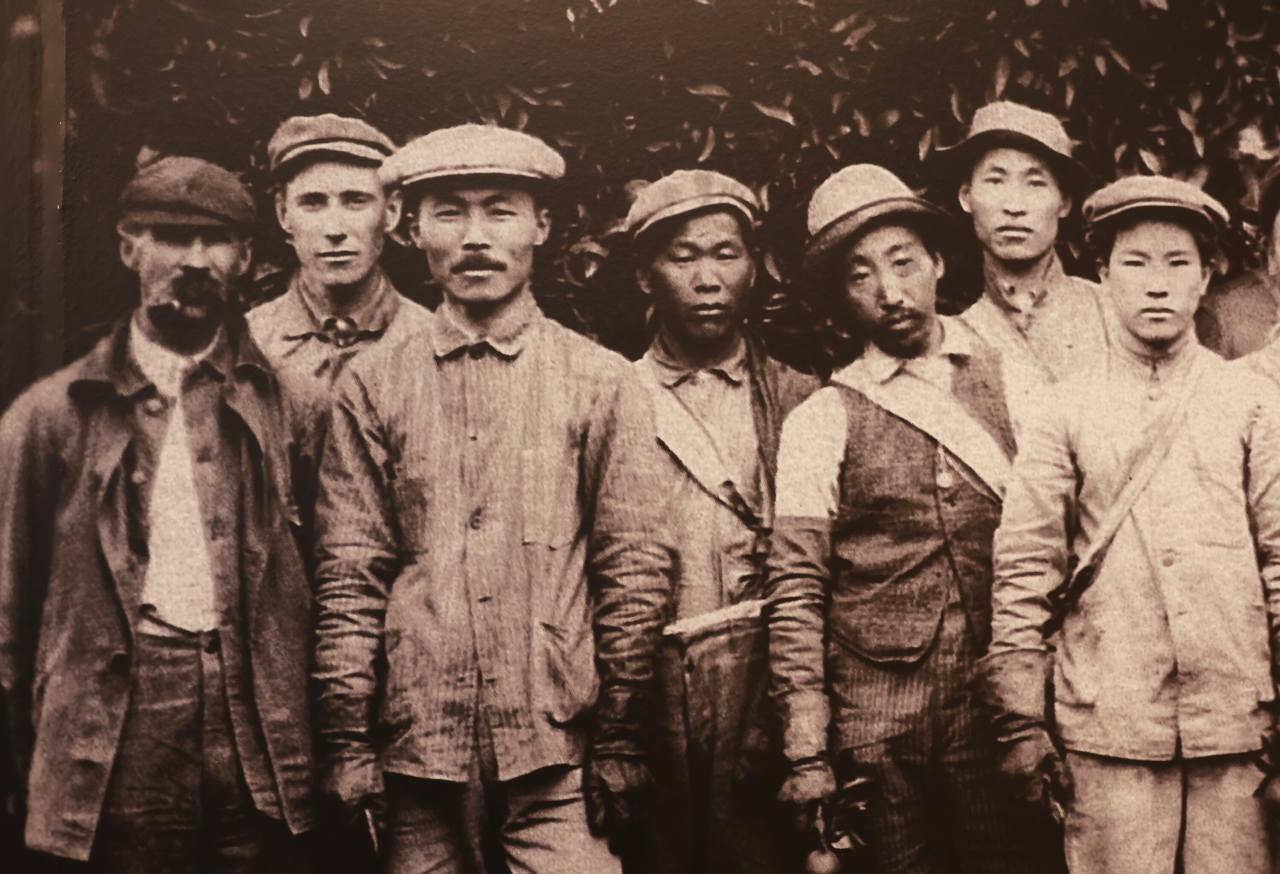 Dosan Ahn Chang-ho (3rd from left), a Korean immigrant and activist who founded Pachappa Camp in 1905, is seen with other workers at a Riverside, California, orange orchard in the early 1900s in this photograph on display at the “Pachappa Camp, The First Koreatown in the United States” exhibition. (Archive photo courtesy of Korean Heritage Library, USC / Photo © 2021 Hyungwon Kang)
Dosan Ahn Chang-ho (1878-1938), one of the most prominent and respected leaders of modern Korea, was an epitome of an “intellectual in action” in 20th century Korea.

Dosan, the pen name of Ahn Chang-ho, means a mountain rising out of the ocean. It is also the Korean name for the island of Hawaii rising out of the Pacific Ocean, which Dosan saw from his ship on his first trip to the US in 1902.

Ahn and his wife, Lee Hye-Ryeon, immigrated to the US in October 1902 as citizens of the Daehanjeguk, the Korea Empire, a new name of the Joseon Kingdom of Korea. They were the first married Korean couple to arrive in the US.

The official immigration of Koreans to the US began with 102 people aboard the SS Gaelic arriving in Hawaii on Jan. 13, 1903. However, by the time more than 7,000 Koreans were living in the US in 1905, they no longer had a country.

The Japan–Korea Treaty of 1905, also known as the Eulsa Unwilling Treaty, signed under duress of Japanese troops at the Korean Imperial Palace, deprived Korea of its diplomatic sovereignty.

Ahn, with four charter members, started the first Korean independence movement in the US in San Francisco. He formed the Korean Kong Lip Association (United Korean Association) with 800 active members in nine branch offices in the western US and additional branches in Manchuria and in Russia, promoting national consciousness and the movement to restore Korean sovereignty.

The United Korean Association raised funds from its members and purchased a three-story headquarters building in San Francisco, California, on Nov. 14, 1905.

One of the best jobs for immigrant workers in the early 1900s was at citrus farms in Riverside in southern California, located about 90 kilometers east of Los Angeles.

The first Korean American community, called Pachappa Camp, was formed where Ahn settled with his wife in 1905.

Researchers at the University of California at Riverside discovered historical records and photographic archives confirming the formation of the Pachappa Camp.

When Violet Catherine Kim, who was born at the Pachappa Camp, passed away in 2018, many items of historical significance were discovered in her estate, including “photos, ledgers, clothing, and many other historical records of Pachappa Camp,” according to Edward T. Chang, professor of ethnic studies and founding director of the Young Oak Kim Center for Korean American Studies at UC Riverside.

Unlike many places in the US and in Mexico where Korean immigrant bachelors worked, families with women and children moved to Riverside and formed the first Koreatown in the US mainland. 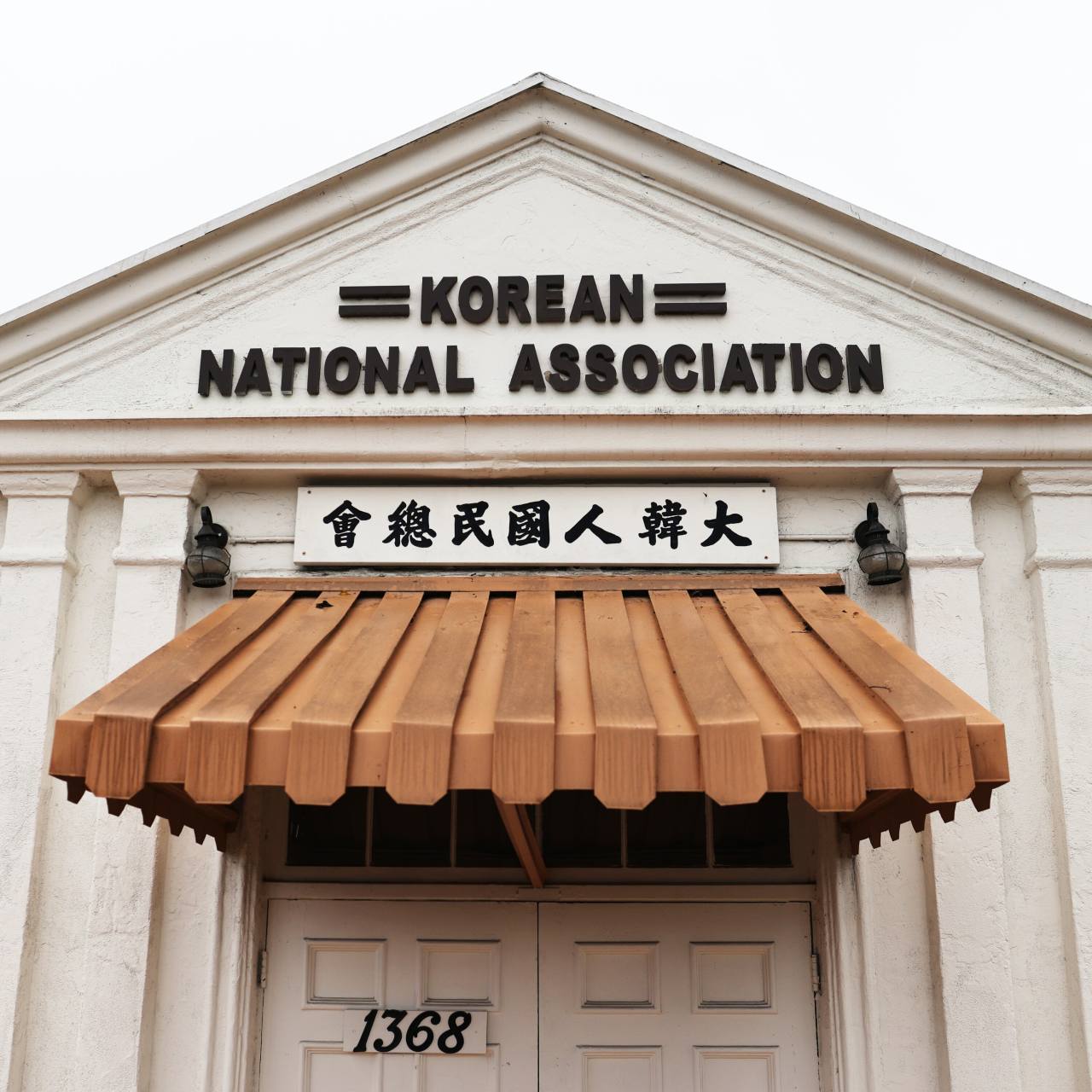 The Korean National Association headquarters in Los Angeles, which Dosan Ahn Chang-ho formed in the US to function as the de facto government for Koreans until the Provisional Government of Korea was launched in 1919. (Photo © 2021 Hyungwon Kang)
As one of the first Korean immigrants to the US, Ahn organized grassroots Korean American community structures wherever he went.

Ahn launched the Kong Lip Sinbo, one of the first Korean language newspapers in America, which kept Korean immigrants informed. The news about the assassination of Durham White Stevens (1851-1908), an American diplomat and later an employee of Japan’s Ministry of Foreign Affairs working for the Japanese colonial office in Korea, by Korean Americans Jang In-hwan and Jeon Myeong-un, was reported in the newspaper. It was one of the first acts of nationalist rebellion by Koreans in the US and ignited the Korean independence movement.

Ahn also created the Korean Labor Bureau in Riverside, California, which helped Korean workers. “During the early 1900s Riverside was one of the wealthiest cities in California. Korean workers came from San Francisco, Hawaii, and other parts of the country to work in the California citrus groves,” said professor Chang.

The Pachappa Camp was also known as “Dosan’s Republic” and the cooperative labor camp enabled economic prosperity for Korean workers in the US, which in turn funded the Korean independence movement.

Several Korean American organizations merged into the Korean National Association of North America in 1909, with chapters in many locations in North America, including Mexico.

Eight years prior to the establishment of the provisional government in Shanghai, Ahn had already been an architect of pan-Korean political gatherings of the Korean National Association in the United States in Riverside, California.

At the 1911 Korean National Association Convention in Riverside, California, delegates studied and discussed various issues for 10 days, and passed the 21 articles of governance, institutionalized the idea of separation of powers through the three branches of government, and announced the establishment of the Central Council.

“At the time, Pachappa Camp, the first Koreatown in the USA, was the largest and perhaps most active center of the independence movement in the United States. Dosan Ahn Chang-ho lived in Riverside, California, in 1904-1907 and in 1911-1913.” said Chang. 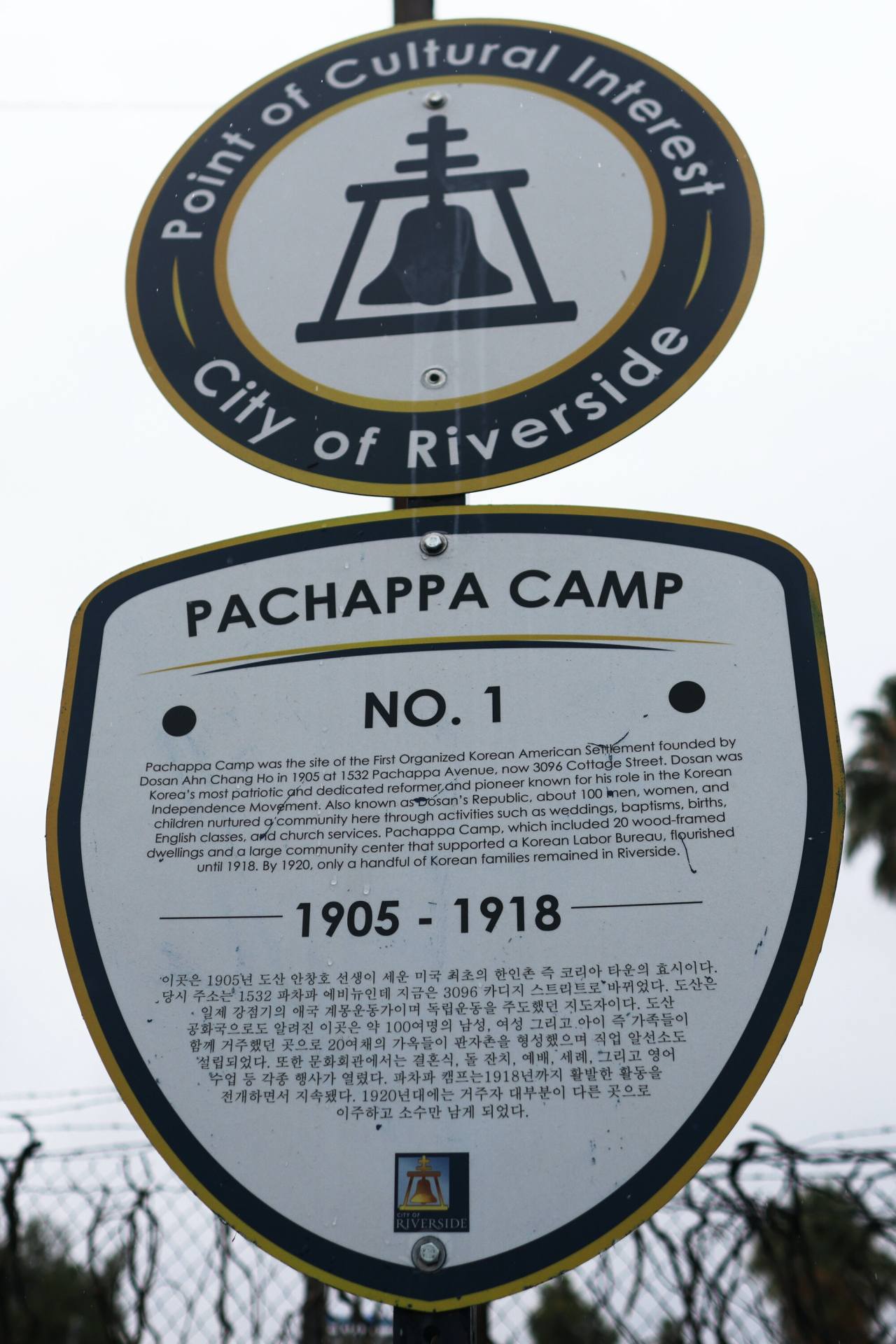 The KNA raised funds with which Ahn launched the Korean Provisional Government in Shanghai in 1919, only nine years after Japan annexed Korea and turned it into a colony of Japan.

Instead of just random independence movements, Koreans formed a provisional government with democratic republic principles less than a decade into the Japanese colonial rule, in the nearby port city of Shanghai.

Ahn, who was one of the founding fathers of the Shanghai Korean Provisional Government, served as the minister of home affairs and deputy minister upon inauguration.

The 1919 declaration of the provisional government of Korea, has been an academic mystery, given that the nature of the Constitution of the new government was more of a democratic republic, rather than the dynastic monarchy system of government under which Koreans had been living.

The Constitution of the Korean Provisional Government articulates egalitarian values engraved in the US Constitution such as all men are created equal.

All of the above democratic principles were later incorporated into the Constitution of the Republic of Korea promulgated in July 1948.

Ahn Pil-lip, better known as the Hollywood actor Philip Ahn, was born as the first child to Ahn and Helen Lee in Los Angeles in 1905.

The first Hollywood Walk of Fame star for an Asian American actor was given to Philip Ahn in Hollywood on Nov. 18, 1984, posthumously.

From picking oranges as immigrant workers to a member of the next generation becoming a Hollywood movie star, the Ahn family certainly realized the American Dream. 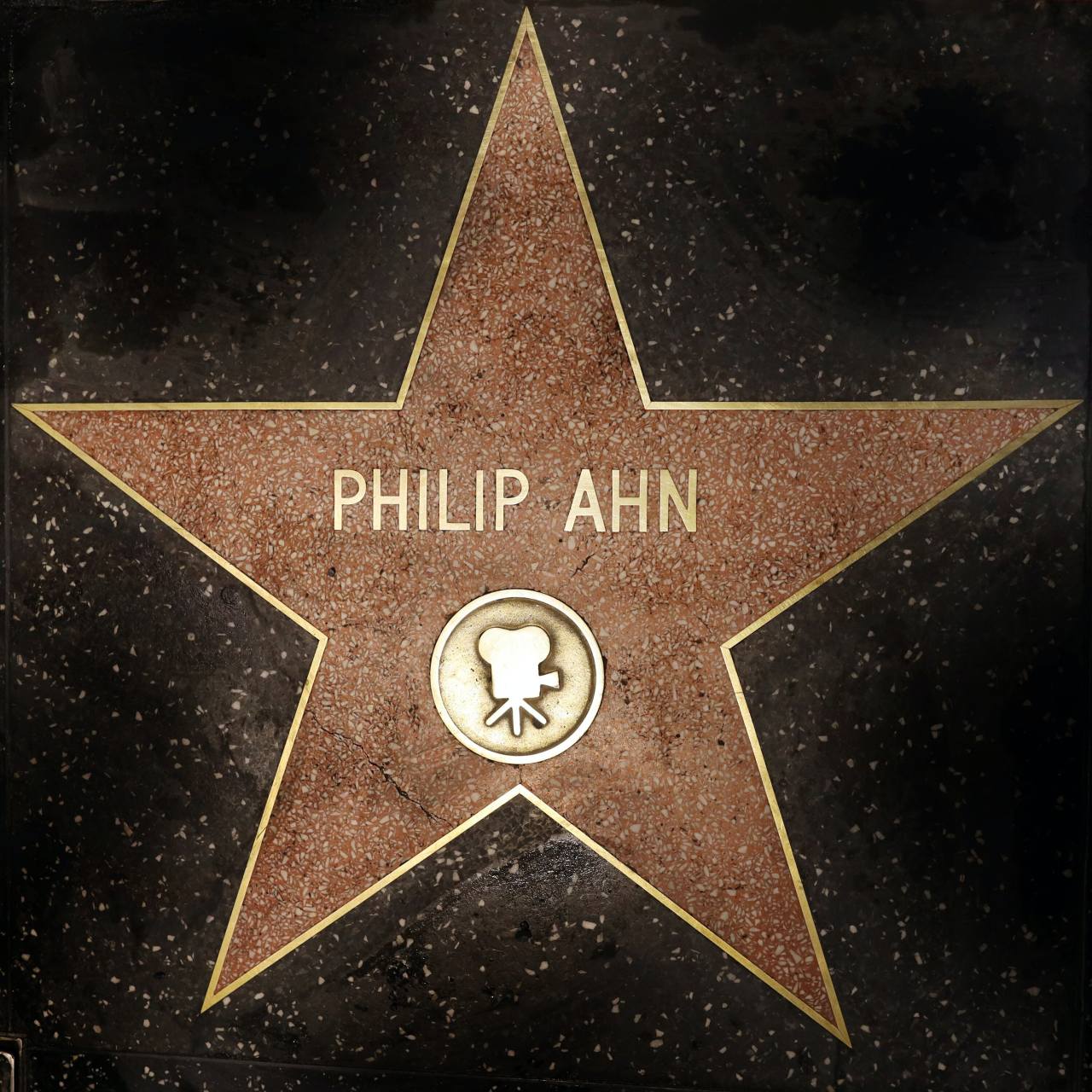