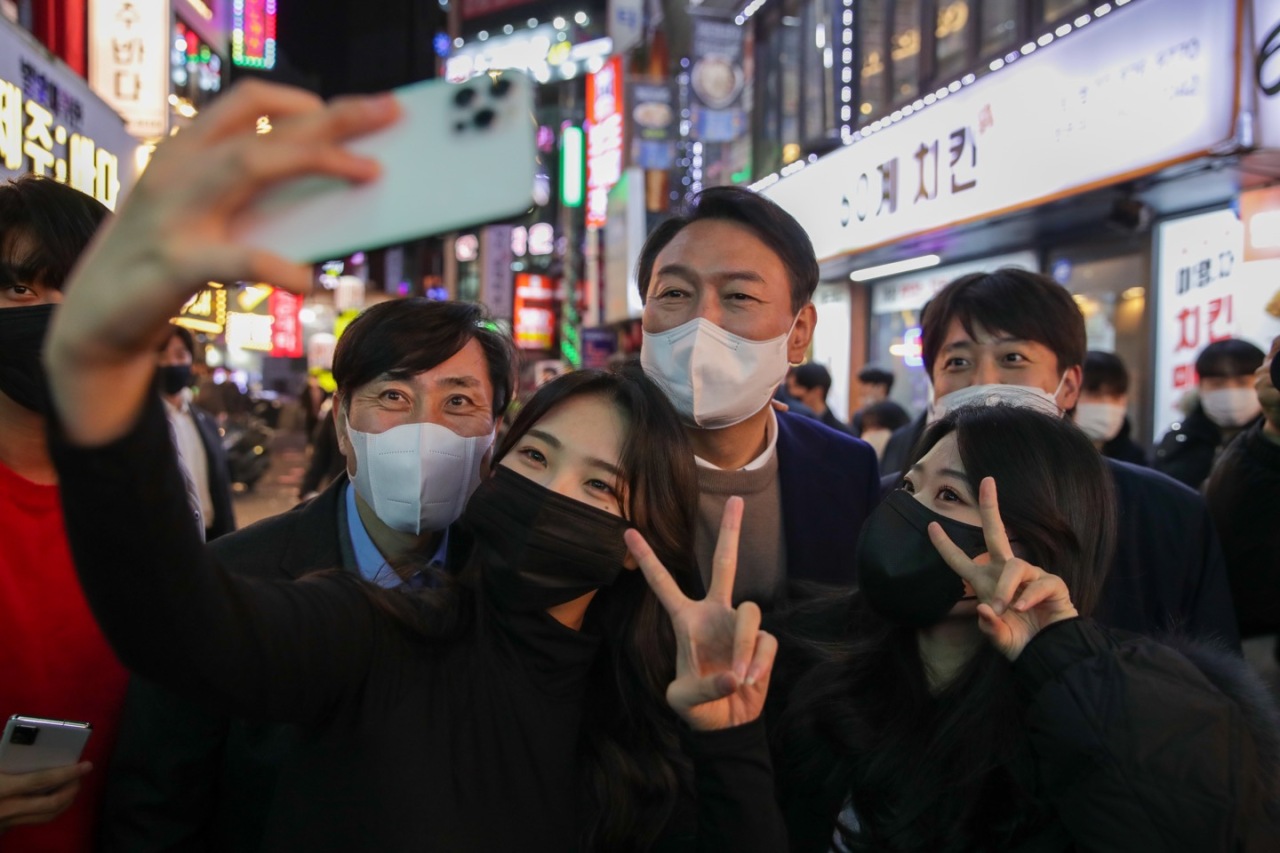 Yoon Suk-yeol, presidential nominee of the main opposition People Power Party (center), poses with university students after a meeting with student party members, near Sillim Station in Seoul on Nov. 26. (PPP)
They come from very different upbringings and career backgrounds, but Korea’s two main presidential candidates are united in one area: They are both failing to appeal to young voters.

Democratic Party of Korea nominee Lee Jae-myung and Yoon Suk-yeol from the People Power Party have both struggled to shed the kind of “kkondae” image that the under-40s find repellent, and their election pledges have failed to inspire them. Kkondae is an expression describing a condescending person who forces their outdated way of thinking onto other people. It is often used to refer to older people in the context of generational gaps.

With disapproval rates for the two leading presidential nominees hovering in the 60 percent range from those in their 20s and 30s -- who make up more than a third of the electorate -- the candidates have started recruiting younger campaign workers for their election camps to appear more relatable.

But experts say the key to winning the hearts of voters in their 20s and 30s is providing strong policies that directly address the problems the age group -- known for its “pragmatic” character -- faces.

In a recent poll by Gallup Korea, the disapproval rate of Lee among respondents in their 20s and 30s were 66 percent and 68 percent, respectively. For Yoon, the figure reached 69 percent and 66 percent.

The figures show that two candidates have failed, so far, to give the “right answers” to attract young voters, who are less affected by political ideologies, Huh Jin-jae, director at Gallup Korea Director told The Korea Herald.

“It shows that the voters in their 20s and 30s find the two candidates are not the president they see as ideal in all aspects,” Huh said.

“While older voters are more prone to choose their candidates based on their political inclination, younger voters appear to be different. They want someone who can give direct benefits.”

Lee and Yoon also lack personal appeals as their past remarks and habits have been criticized as “kkondae” from the age groups, pundits say.

In the eyes of the young voters, there is little difference in the personalities of Lee and Yoon’s and both are perceived as “established” figures. In addition, neither is free from corruption, something younger voters are particularly sensitive about.

“From my experience of teaching students at university, I found ‘fairness’ is one of the most important values for the age group. They cannot stand it when someone receives preferential treatment for no reason,” said Choi Jin, the head of the Institute for Presidential Leadership who is currently teaching at Kyonggi University.

Lee has been linked to a land development scandal in Seongnam, Gyeonggi Province, over a project that was started when he was the mayor of the city.

Yoon, who was the country’s chief prosecutor until March, is dogged by a controversy surrounding his wife and her family. His wife, Kim Kun-hee, is alleged to have been involved in a Deutsch Motors stock manipulation case, and she is alleged to have committed academic plagiarism. 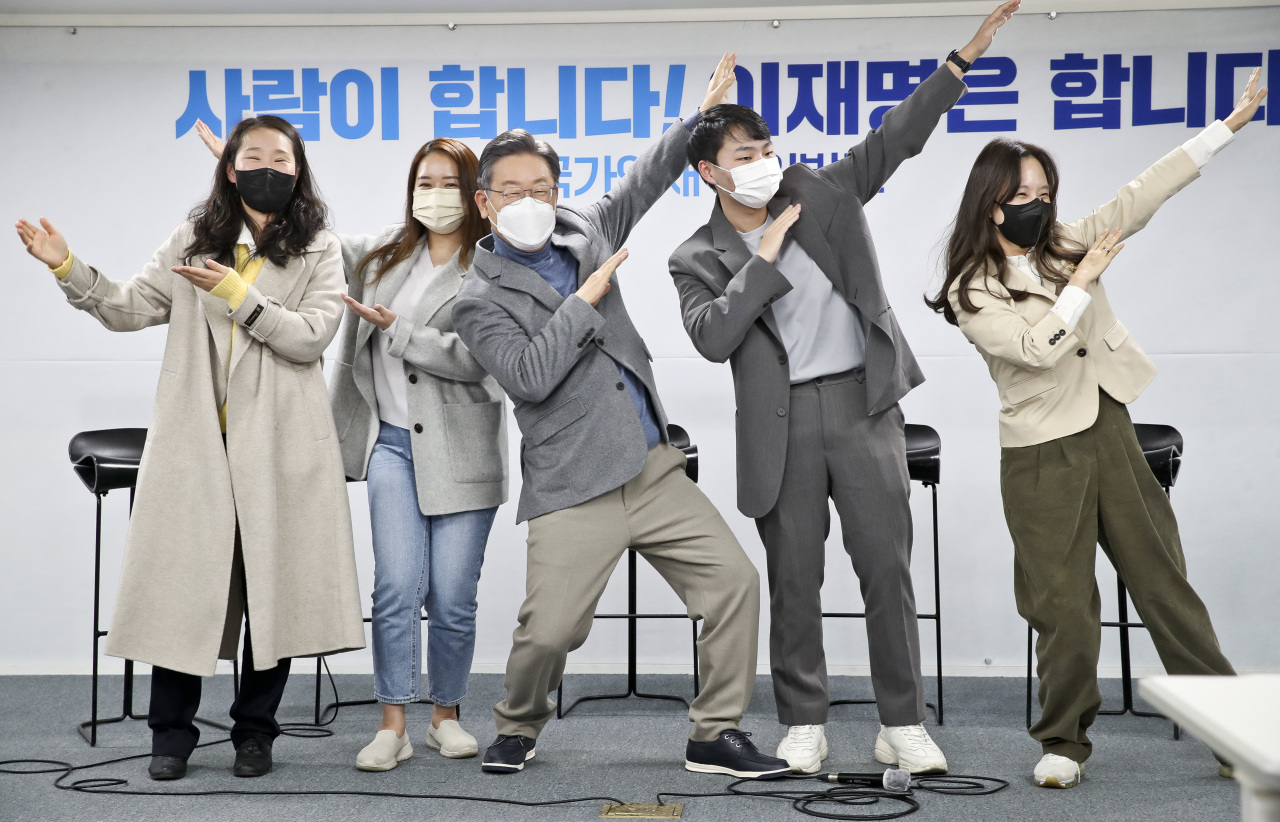 Lee Jae-myung, presidential nominee of the ruling Democratic Party (third from left), poses with four “youth” campaigners during the announcement of their addition to his election committee, at the party headquarters in Yeouido, western Seoul, on Wednesday. (Yonhap)
Younger campaigners in election camp

In an effort to attract young people, the candidates have started recruiting young campaign workers and popular figures in their election committees.

The Democratic Party has so far recruited four “youth” campaigners, including a 20-year-old AI developer into its election committee, and revealed a plan to establish a government entity solely for youth.

In announcing the recruitment, Lee admitted to being a “kkondae” while claiming that he has tried harder than any other politician to get closer to younger generations.

Yoon’s election committee is also ramping up efforts to bring in figures deemed more relatable to those in their 20s and 30s, and established a “youth committee” inside his election camp.

Last week, Yoon posted an open invitation recruiting “youth aides,” to support his party and the election committee. He also said he would deploy the aides in all ministries to take part in policymaking.

“It is my promise to not use young people as decorations for the election and abandon them afterwards, but to have them as my partners in dealing with state affairs,” Yoon said in a social media post.

Pundits echoed the view that a nominee who presents policies that resonate with voters in their 20s and 30s will become the winner of the election.

“Recruitment of young people and forming entities for their involvement may affect the popularity of the candidates, but it will only be a short-term solution. The nominees will have to be able to address fundamental issues to win support,” Eom Kyeong-young, head of private research center Zeitgeist Institute, said.

One of the reasons behind the popularity of Hong Joon-pyo, the runner-up in Yoon’s party primary, can be found in his straightforward pledges for people in their 20s and 30s, experts said.

During the People Power Party primaries, Hong was the most favored candidate by the age group in local polls.

After Hong’s eventual defeat, some 3,000 party members who supported Hong defected. Among them, 75 percent of the 1,800 defectors in metropolitan areas were in their 20s and 30s, according to the party.

“Hong proposed some strong reform plans and was more straightforward on agendas that other candidates were hesitant on, such as criticizing labor unions. It does not mean his pledges were all supported, but he presented more direct solutions,” Eom said

With less than a hundred days left before the presidential election slated for March, there is still much room for the candidates to collect the ballots of the 20s and 30s.

A recent poll by Gallup Korea showed 63.6 percent of the 115 respondents aged 18 to 29 have answered they may vote for a candidate different from the one they are supporting now. Among the 116 respondents in their 30s, 54.5 percent said they may change the candidate they support -- more than triple the percentages posted for those in their 50s and 60s.

“Voters in their 20s and 30s pursue pragmatism. They will watch the candidates until the last minute, and decide who is more capable of addressing policies related to them,” Choi said.