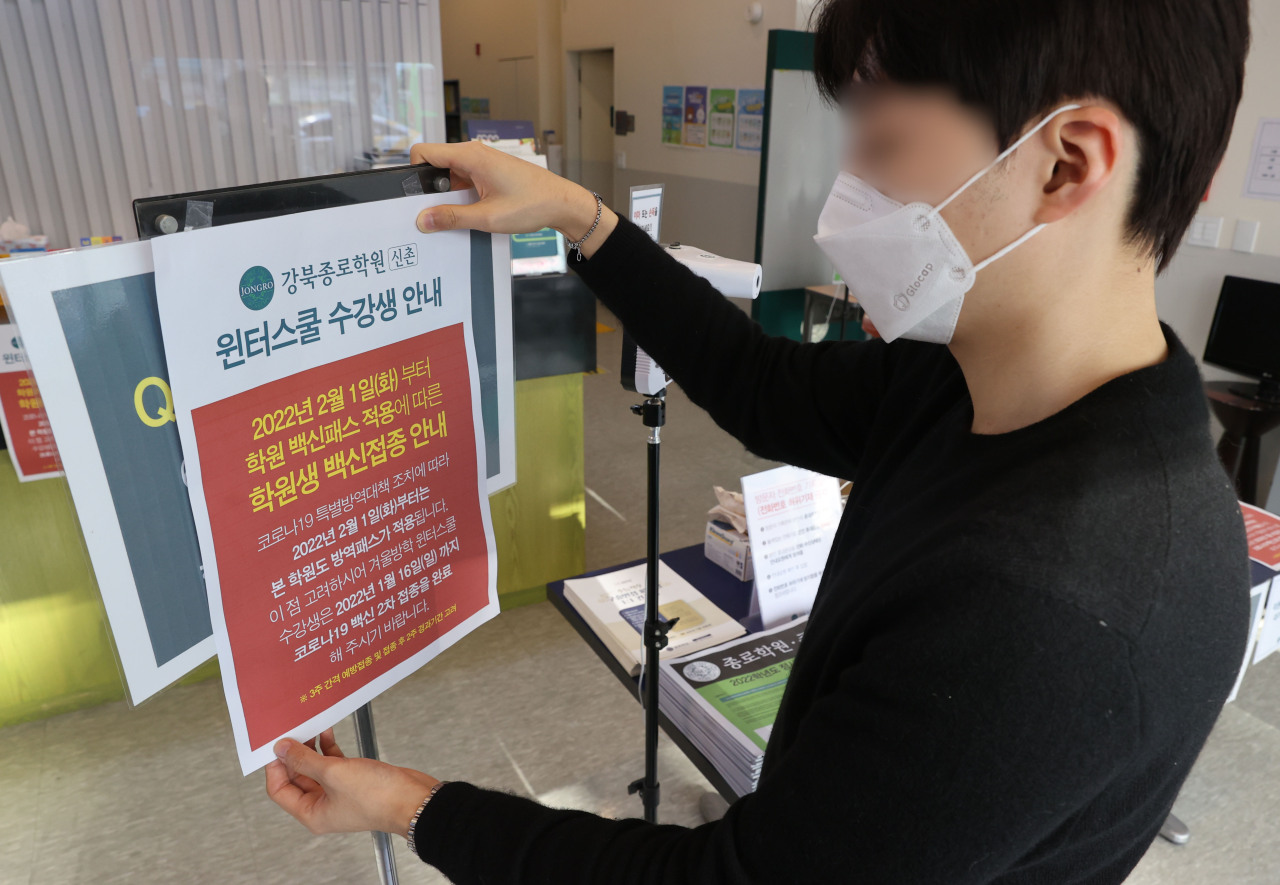 An employee posts a notice informing visitors of a new requirement for vaccine passes at a cram school in Seoul on Tuesday. (Yonhap)
The ruling Democratic Party has begun looking into delaying the introduction of the "vaccine pass" system for children aged 12 to 18 and changing the types of facilities that require the pass after strong protests from students and parents, multiple party officials said Wednesday.

Under rules that took effect Monday, the list of facilities requiring visitors to present a vaccine pass -- proof of vaccination or a negative COVID-19 test result -- has expanded to include restaurants, coffee shops, cram schools, study halls and libraries.

The government said it will apply the rule to children aged 12 to 18 in February after more of them have been inoculated, sparking angry protests from parents concerned about the safety of the vaccines in children.

"We're aware of the strong complaints about the teenage vaccine pass," a key party official told Yonhap News Agency on condition of anonymity. "In any antivirus measure, we need to hear the views of experts, so we'll look at what the actual problems are and discuss them with the government."

Some parents and students have claimed the new rule forces children to get vaccinated because otherwise they will be denied entry to cram schools and study halls, which to them are essential facilities.

Others have complained of inconsistencies citing the exclusion of religious facilities and department stores from the expanded list.

"We hear a lot of people saying the government measures are excessive because children are going to school regardless of their vaccination status but may be unable to go to cram schools," a DP lawmaker said. "There's a high chance this will have a negative effect on public sentiment ahead of the presidential election."

Possible solutions that are being talked about include adjusting the rule based on the capacity or number of students at cram schools and allowing an additional grace period following the rule's implementation in February.

"If we apply certain criteria, we could consider allowing students who have not completed their vaccination to go to cram schools," said an official of the DP policymaking committee. (Yonhap)