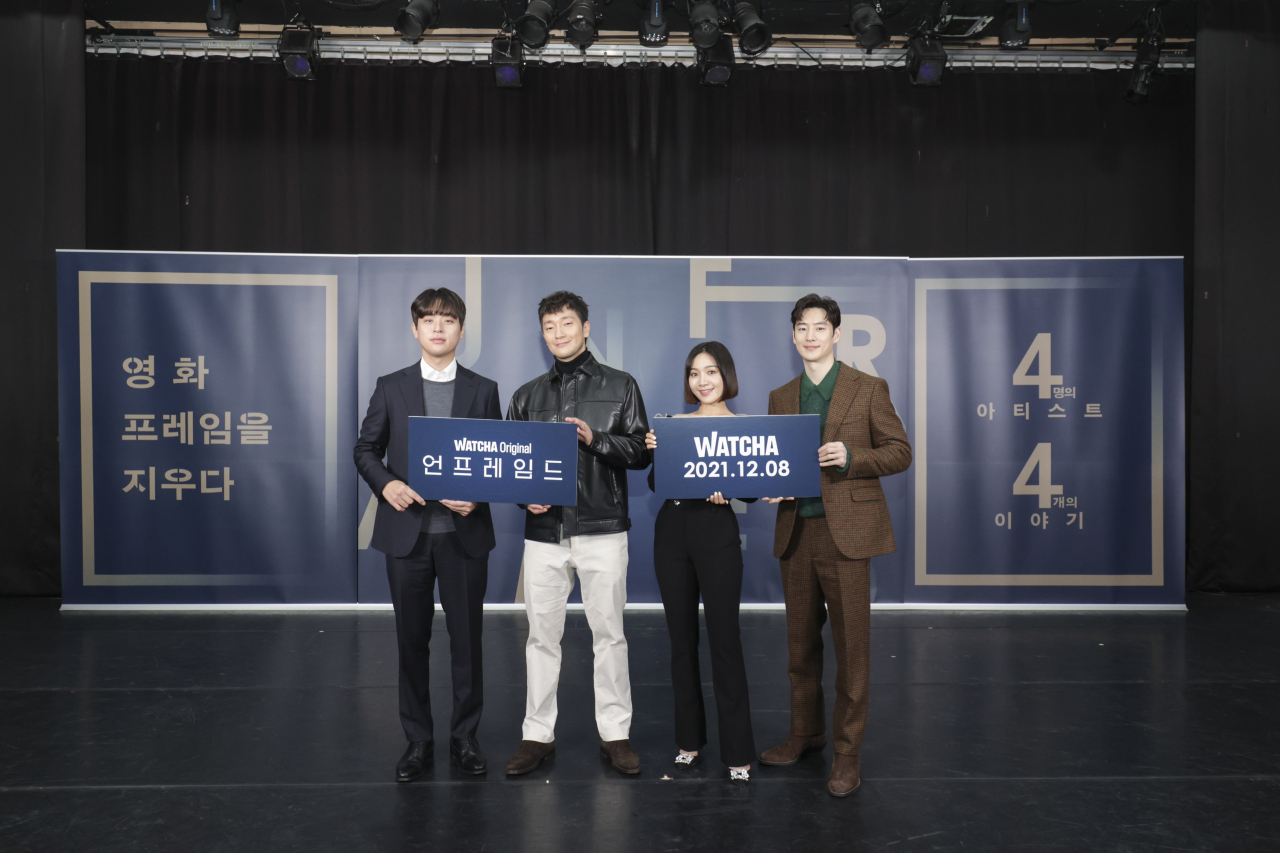 The omnibus short film project is jointly organized by Watcha and HardCut, a new production company co-founded by actor Lee Je-hoon, film producer Kim Yoo-kyung and film director Yang Kyung-mo. The project aims to gather unique and unconventional stories and marks the directorial debut of each of the four actors.

Park’s film “Vote for ′I Don′t Know’” was the first to be previewed during a press conference before its release on Watcha on Wednesday.

It presents a story of elementary school students selecting a class president. The power dynamics at play in the classroom are reminiscent of the adult world of politics.

“Even though some are not part of the main cast, I gave names to them all. I used the names of my high school and middle school friends. Also, I gave them all a note that explains their relationship with others in the classroom,” Park said. “I wanted all of them to feel a sense of responsibility.”

To create a visual rhythm in the movie, Park worked with Korean rapper Mommy Son, also known as Mad Clown.

“Adults tend to think that all kids are innocent. I wanted to tell a story that says it might not be true. I thought that hip-hop music would fit the story that I am trying to tell,” Park said.

A road-trip movie about an old aunt and her grown-up nephew titled “Rerun,” directed by Son, was introduced next.

The two protagonists start their journey at the aunt’s house and go through diverse situations as they make their way to a wedding ceremony.

“At a wedding I attended, I saw a nephew in a suit and an aunt wearing hanbok. They seemed to be lost at the wedding and their relationship triggered my imagination to create this film,” Son said.

Since the romantic comedy “Nothing Serious,” starring Son, is currently in theaters, he was asked about what it was like to have both films presented simultaneously.

“I like honesty. So to be honest, I wish my film (‘Rerun’) would do better (than ‘Nothing Serious’),” Son joked.

“I am saying this because I feel more responsibility as a director. I felt like I had invited all the actors to join my table.”

Choi is the only one of the four directors to also act in her film, “Bandi.”

Her movie tells the story of a girl named Bandi (Park Soi) who lives with a single mother (Choi).

Lee′s “Blue Happiness,” the last debut to be introduced, follows a young man (Jung Hae-in) who gets involved in stock trading while seeking employment.

“I want my film to be relatable to young people,” Lee said.

He also talked about the process of casting Jung.

“When writing the script, I imagined Jung saying the lines and his facial expressions. It was written for him but I was nervous to show it to him because he might reject it,” Lee said. “I was so happy when he said he would do it. I thought I was very lucky. I now know how directors feel after handing over the script.“

Lee was not the only one to realize the burden of directors.

“Through this movie, I realized that the director has to do lots of different things and has a huge responsibility. I reflected on all the moments in my past when I blabbed about directors. It was a shocking experience that made me realize many things,” Park said.

Although it is not easy, Son said he would like the chance to direct again.

“I have been hoping to direct short films for about 10 years. There was a time when I prepared for one and then gave up,” Son said. “I had a trauma of a sort from that and this time I could finally do it. I want to take further challenges and direct a feature (next time). Feature, here I come.“