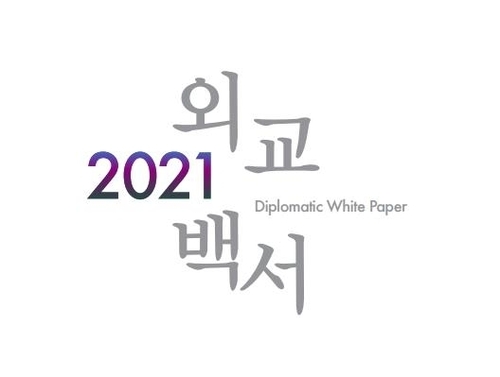 The foreign ministry added a new chapter to the 2021 white paper to detail diplomatic activities in regard to protection of Korean nationals and businesses abroad, securing medical equipment, such as masks, and regional coordination against the pandemic.

"The Ministry of Foreign Affairs actively responded to the changing environment at home and abroad to protect our people and the national interests, at a time when nations across the globe closed borders and focused on the pandemic responses," Foreign Minister Chung Eui-yong wrote in a preface.

In regard to inter-Korean relations, the ministry said it continued efforts to revive denuclearization talks with North Korea despite its border lockdown and incidents that raised tensions on the Korean Peninsula.

To avoid further escalation of tension, South Korea and its U.S. ally remained in close cooperation to sternly respond to Pyongyang's short-range missile tests, blowing up of an inter-Korean liaison office in the border city of Kaesong and the killing of a South Korean fisheries official near the western sea border last year, the paper said.

Meanwhile, the 2021 version described Japan as South Korea's "closest neighbor", using the expression for the second consecutive year after upgrading it from "a close neighbor" in 2019.

Seoul has taken a "two-track approach" to separate historical issues from "future-oriented cooperation" in practical areas to stably manage and develop the bilateral relations, it noted. (Yonhap)