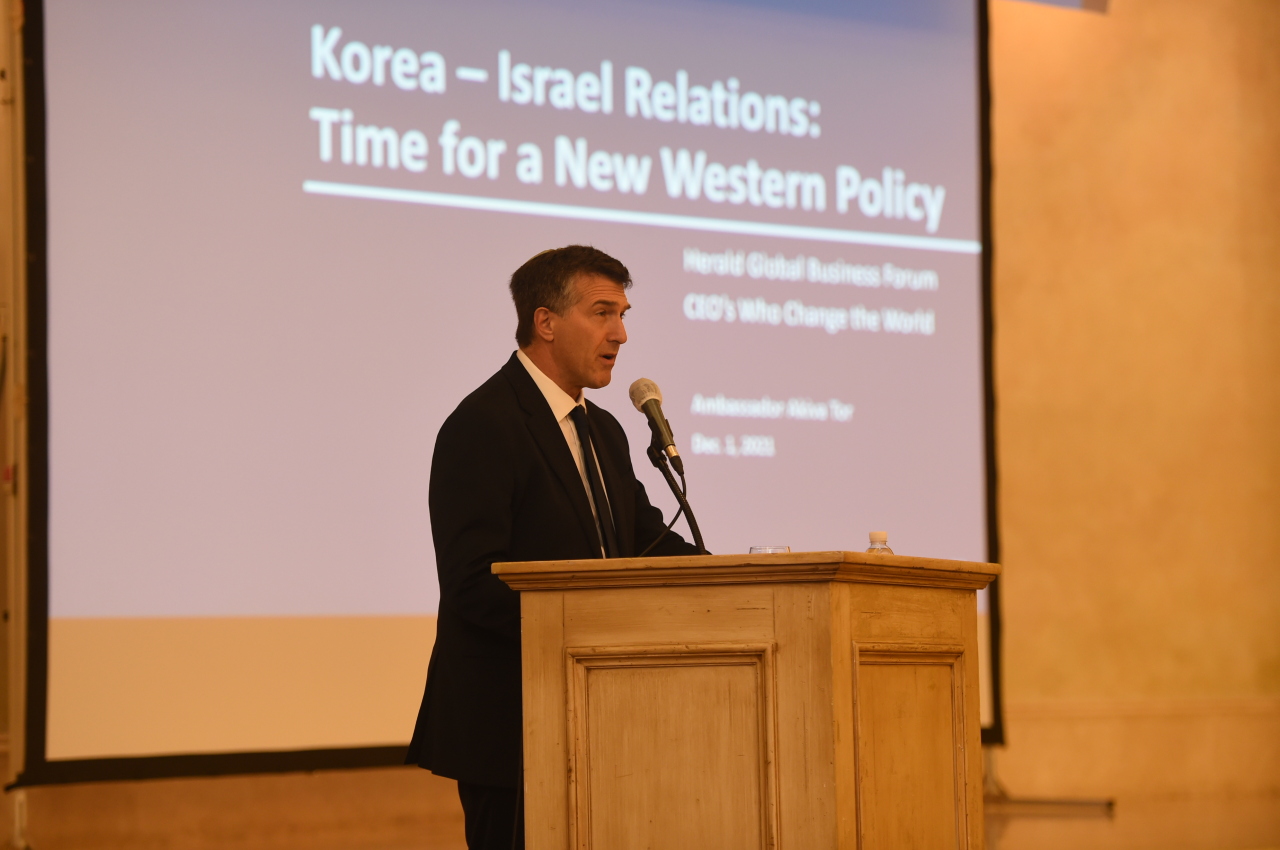 Tor recommended forging a new defense alliance, as Korea and Israel are both democracies facing severe nuclear and missile threats.

He said such an alliance would bring enormous economic and defense benefits and strengthen Israel and Korea without harming other interests, calling on authorities to mobilize support to realize the alliance.

Tor, who delivered the remarks at the forum’s eighth weekly gathering, acknowledged a need to deepen the Israel-Korea relationship.

He pointed to four pillars that are essential to enhancing ties: senior leadership, innovation, clean tech and defense.

Particularly in the field of technology, Tor said there are opportunities for the two to tap into.

Israel has the third-largest number of companies on the tech-heavy Nasdaq stock exchange after the US and China, and Korea is “a tech manufacturing and marketing genius of the highest order,” he said.

“Technology alliance is our economic lifeblood and needs to deepen even more,” said the ambassador.
In terms of clean tech, Israel’s “strong relations with UAE is the obvious launching ground for trilateral cooperation in creating and marketing groundbreaking clean tech,” he said.

With UAE’s finances, Israel’s innovation, and Korea’s hi-tech manufacturing and marketing, it could pave the way for a trilateral Israel–UAE–Korea clean tech alliance, Tor suggested.

“The US would surely embrace and perhaps seek to join such a tech alliance,” he said.

Tor said the two nations shared a strong affinity despite being 8,000 kilometers apart with no physical resemblance, shared language or religion.

But the bond has remained strong, since the two established diplomatic ties in 1962.

“Israel is a strong brand in Korea, and Korea is very popular in Israel,” he said.

This May, the two signed a free trade agreement, Israel’s first FTA with a country in Asia and Korea’s first with any country in the Middle East.

The FTA is expected to boost trade by hundreds of millions of dollars and bring the dynamic economy of Israel and Korea into deeper cooperation and synergy, Tor said.

Tor also applauded the success of their vaccine cooperation deal, having carried out the world’s first vaccine swap in July. Israel delivered 700,000 Pfizer dozes that were about to expire to speed up Korea’s immunization efforts. Korea was expected to return the same number of shots to Israel as early as September.

“We did it in record time reflecting the high level of trust we enjoy at the professional government level,” he said.