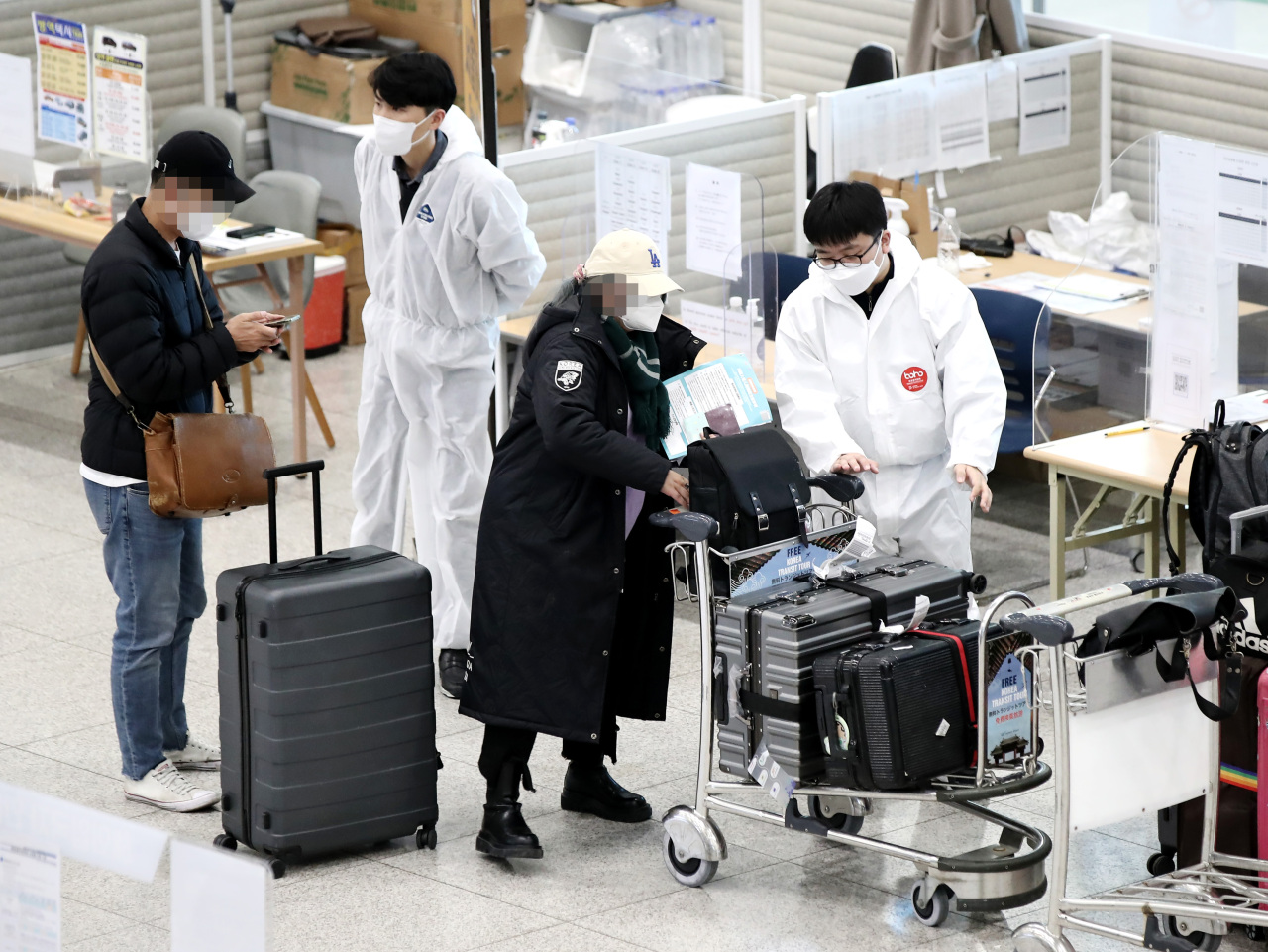 Inbound travelers are guided by quarantine officials at Incheon International Airport, west of Seoul, on Friday. (Yonhap)
Travelers returning home Friday from short-term overseas trips were embarrassed to learn that they must self-isolate at home for 10 days under the government's emergency quarantine rule announced only two days earlier to stem the spread of the omicron COVID-19 variant.

The 10-day mandatory quarantine for all inbound travelers was suddenly made public Wednesday, when South Korea confirmed its first five cases of the omicron variant. The new rule started at the beginning of Friday and will last through Dec. 16.

Regardless of their vaccination status, South Koreans and foreigners on long-term stays must self-quarantine at home while foreigners on short-term stays have to be quarantined at government-assigned facilities.

Many international travelers arriving at Incheon International Airport, the gateway to Seoul, can hardly hide their embarrassment and dissatisfaction, as they have to be unexpectedly quarantined due to the abrupt policy change.

Choi Jong-geol, who runs a travel agency in South Korea, is one of them.

"I heard the news of a 10-day quarantine without any preparation, while preparing to board a home-bound flight," said Choi, who arrived at the Incheon airport from the United States on Friday morning.

"I could have postponed my flight if I had been informed of the news a little bit earlier. The operation of my company will be difficult for the time being," he grumbled.

He then criticized some careless acts by the airport's quarantine authorities, saying multiple entrants were led to use the same pen to fill out their immigration documents and all entrants were allowed to visit airport restaurants without any special precaution.

A 74-year-old man surnamed Park, who returned Friday morning from a two-week visit to his second daughter living in Phuket, Thailand, said the new quarantine rule is "annoying and outrageous."

"I'm fine because I'm retired. But my eldest daughter in her 50s, who went to Thailand with me, has to go out and meet people for business every day. She is at a loss over what to do," Park said.

Jung Yo-han, who was waiting for his wife to return after her three-month-long visit to their daughter living in Dusseldorf, Germany, said it is embarrassing for the government to announce a new quarantine rule only two days before its enforcement.

But some citizens spoke in favor of the 10-day mandatory quarantine, saying everyone should be careful even if the quarantine rule is uncomfortable, because the omicron variant reportedly cannot be prevented by vaccination and the number of new daily COVID-19 cases is hovering around 5,000.

There are exceptions to the quarantine rule. Those arriving from countries that have signed a "travel bubble" agreement with South Korea, such as Singapore and Saipan, are exempt from the quarantine. The exemptions also apply to the essential personnel of companies, such as executives, and ranking government officials.

An office worker who arrived from Singapore on Friday morning was wearing an "isolation exemption" tag.

"I came to see a friend who lives in Seoul after almost three years. Without the quarantine exemption, I would have never met the friend. I'm really glad," the worker said.

According to Incheon International Airport Corp., 8,276 people are expected to enter the country after arriving at the airport Friday through 67 flights. It was slightly lower than the 9,183 arrivals on the previous day. (Yonhap)