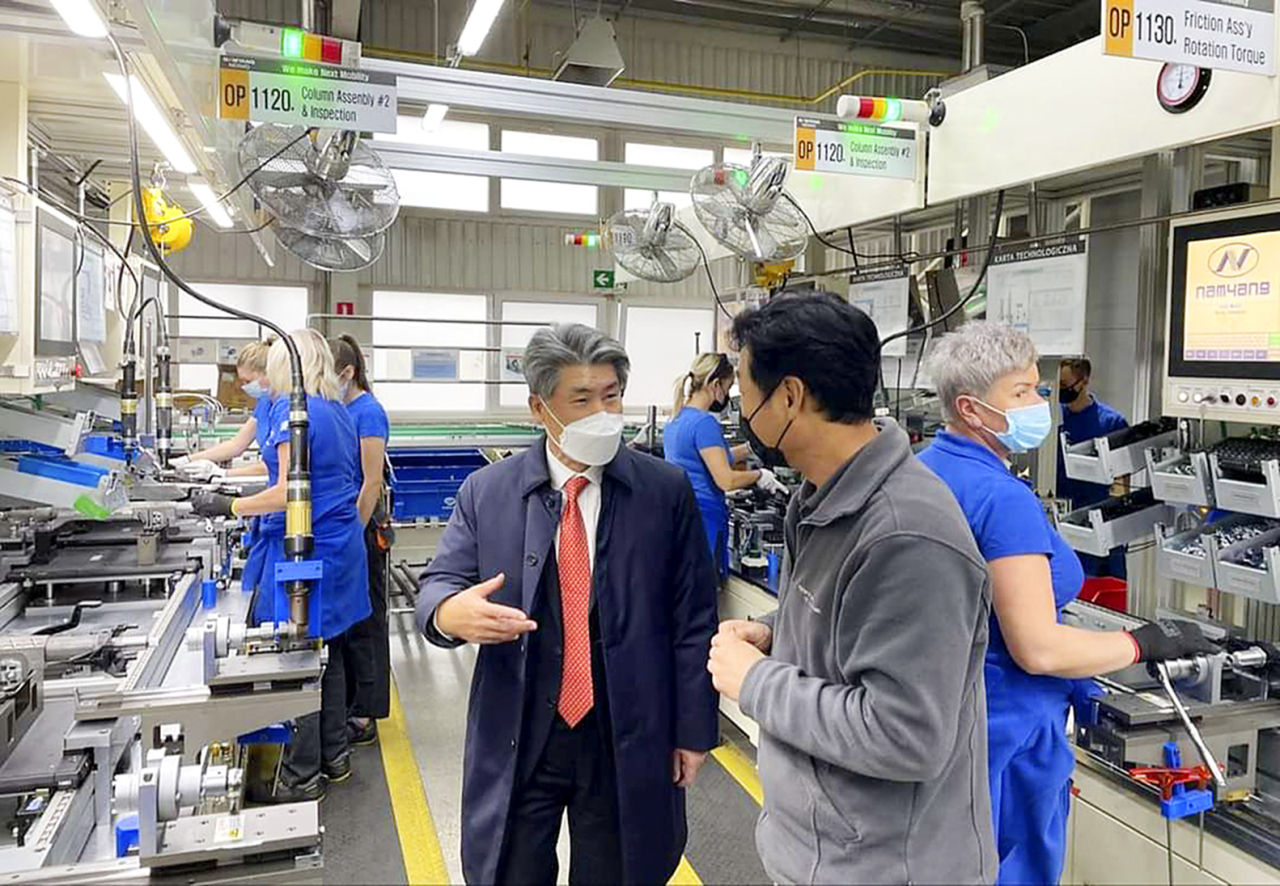 IBK CEO Yoon Jong-won talks with a Namyang Nexmo official at the auto parts manufacturer’s factory in Katowice, Poland on Nov. 26. (Industrial Bank of Korea)
State-run Industrial Bank of Korea CEO Yoon Jong-won recently met with corporate clients and the Organization for Economic Cooperation and Development officials in Europe, while inspecting potential markets the bank is eyeing to enter, the firm said Friday.

The meetings and site visits took place during his weeklong business trip to Poland, the United Kingdom and France from Nov. 23-30.

In Poland, Yoon visited two factories and met with corporate clients to lend an ear to the troubles they have been experiencing with financing in overseas markets. The factories belonged to Korean auto parts manufacturer Namyang Nexmo’s factory located in the city of Katowice, near the borders of Czech Republic and Slovakia and its industry rival Woobotech, in the city of Zory near Katowice. Yoon met with officials of a total of four companies, including Namyang Nexmo and Woobotech.

“We were able to hear the complications our clients were experiencing with financing in Poland, due to the lack of Korean banks in the country,” Yoon said via Facebook on Nov. 26.

“The firms are currently using our London branch, but are experiencing difficulties with partial financing, currency exchange and cash wiring,” he added.

Yoon said he would review ways to resolve the financial hurdles the Korean businesses are facing in the market, hinting that IBK is viewing Poland as a viable market to enter.

IBK has been reportedly preparing to enter Poland as part of their overseas market expansion since 2018, but the plan has been delayed due to the COVID-19 pandemic.

So far, more than 200 Korean businesses have entered the Central European market, which has been attracting global battery manufacturers in recent years.

In the UK, Yoon met with officials at startup accelerator Level39 based in London to discuss issues of financing new businesses. He then met with OECD officials at the global body’s headquarters in Paris to address the topic of adopting environmental, social and governance values in management and achieving carbon neutrality through financing.

“Through the latest business trip, we were able to review our business strategies for Europe and discuss our interim cooperation with OECD,” Yoon said in a statement.

IBK currently operates two overseas subsidiaries in China and Indonesia, with several branches and offices under them. It has branches in nine different cities, including New York City, London, Hong Kong, Hanoi, New Delhi and Manila. Its London branch is the bank’s sole European headquarters for the moment.