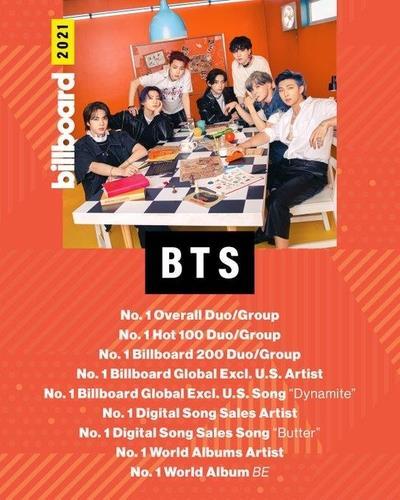 The band's 2020 hit song "Dynamite" led the year-end Billboard Global Excl. US chart, while "Butter" stood atop the Digital Song Sales list. Its fifth studio album "BE" took the No. 1 title on the top World Albums for 2021.

"BTS dominates internationally," said Billboard in a posting on its website. "The seven-piece South Korean group is the year's top artist, and has the year's top song, on the Billboard Global Excl. US recaps."

BTS has gone big in 2021, having three Billboard Hot 100 chart-toppers under its belt -- "Butter," "Permission to Dance" and "My Universe," a collaborative with British rock band Coldplay. (Yonhap)