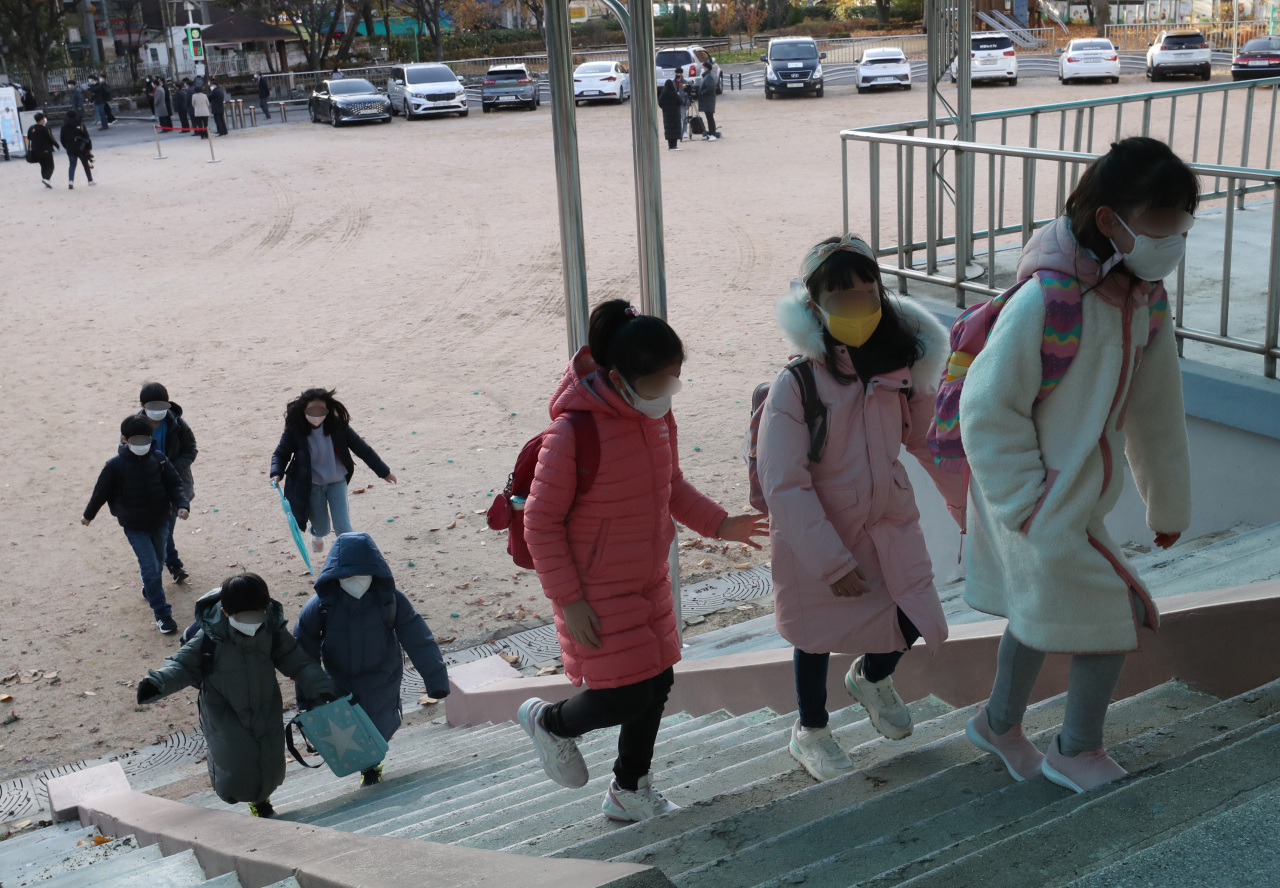 Students show up for class at Geumyang Elementary School in Yongsan-gu, central Seoul on Nov. 22 (Joint Press Corps)
Schools are to remain open and hold in-person classes despite the surge in COVID-19 cases related to schools.

A total of 1,185 people, including students and staff at schools in Seoul, have been confirmed with COVID-19 since schools fully reopened last week, marking an increase from the 1,018 confirmed cases in the previous week, according to the data provided by the Seoul Metropolitan Office of Education.

From Nov. 22 through Sunday, 1,090 students in Seoul tested positive for COVID-19. More than half of the students confirmed as having the coronavirus were elementary school students.

Some 547 elementary school students were confirmed, followed by 319 in middle school, 146 in high school and 53 kindergarteners. There were also four confirmed cases from special schools and seven from other institutions. Some 95 school staff also tested positive for the virus last week.

Of the total infected students and officials, transmissions at schools accounted for 18.8 percent. Some 36 percent were household transmissions, while 33.3 percent were cases with unidentified infection routes.

Although the numbers are not encouraging, authorities have decided to continue the scheme for in-person classes for schools.

“The number of transmissions in schools is not high,” Seoul Education Superintendent Cho Hee-yeon said Tuesday at a briefing. “The Seoul education office will run inspections on facilities often used by students outside of schools twice a week, along with operating a task force on COVID response and running preemptive PCR tests at schools until the end of the year.”

Cho said there is a need to expand vaccination among students, considering the aftereffect of returning to schools.

According to the government’s report Monday, the vaccination rate for those aged 12-17 remains at 20.2 percent, much lower than for other age groups.

Cho’s call for student vaccination comes after the government’s announcement to encourage vaccinations among Koreans on Monday.

“We understand that there are worries as there is a rise in the number of confirmed cases in Greater Seoul, but students in the area have returned to in-person classes after almost two years,” Education Minister Yoo Eun-hae said Monday at the COVID-19 special quarantine inspection meeting Monday.

“Schools are mandatory facilities for children,” Yoo said. “To minimize the risks, we will strengthen the disease control measures in and out of schools and support vaccinations for teenagers aged 12 to 17.”

The Education Ministry and provincial education offices have decided to prepare school curriculums for emergencies. Schools can change their attendance policies flexibly to maintain a low level of class density.