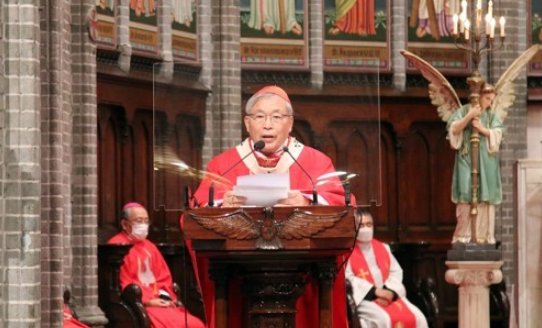 The Archdiocese of Seoul said it will hold a Mass to mark Yeom's retirement at Myeongdong Cathedral in central Seoul at 10 a.m. with about 600 priests and faithfuls attending.

Appointed as the archbishop of Seoul in May 2012, Yeom has since served in the post for about nine years.

He will be replaced by Archbishop Peter Chung Soon-taick.

Yeom reportedly offered his resignation to Pope Francis in 2008 -- the year he turned 75. Every Catholic bishop is required to submit their resignation to the Vatican upon reaching the age of 75.

Born in 1943 to a family of Catholic martyrs in Anseong, 77 kilometers south of Seoul, Yeom graduated from the Catholic University of Seoul in 1970 and was ordained to the priesthood in the same year.

After being consecrated as a bishop in 2002, he worked as chairman of the Catholic Peace Broadcasting Corp. and president of the Babo Nanum Foundation, a local charity group.

He became the 13th archbishop of Seoul after late Cardinal Nicholas Cheong Jin-suk retired from the post in 2012. In February 2014, he was appointed as the third Korean cardinal. (Yonhap)