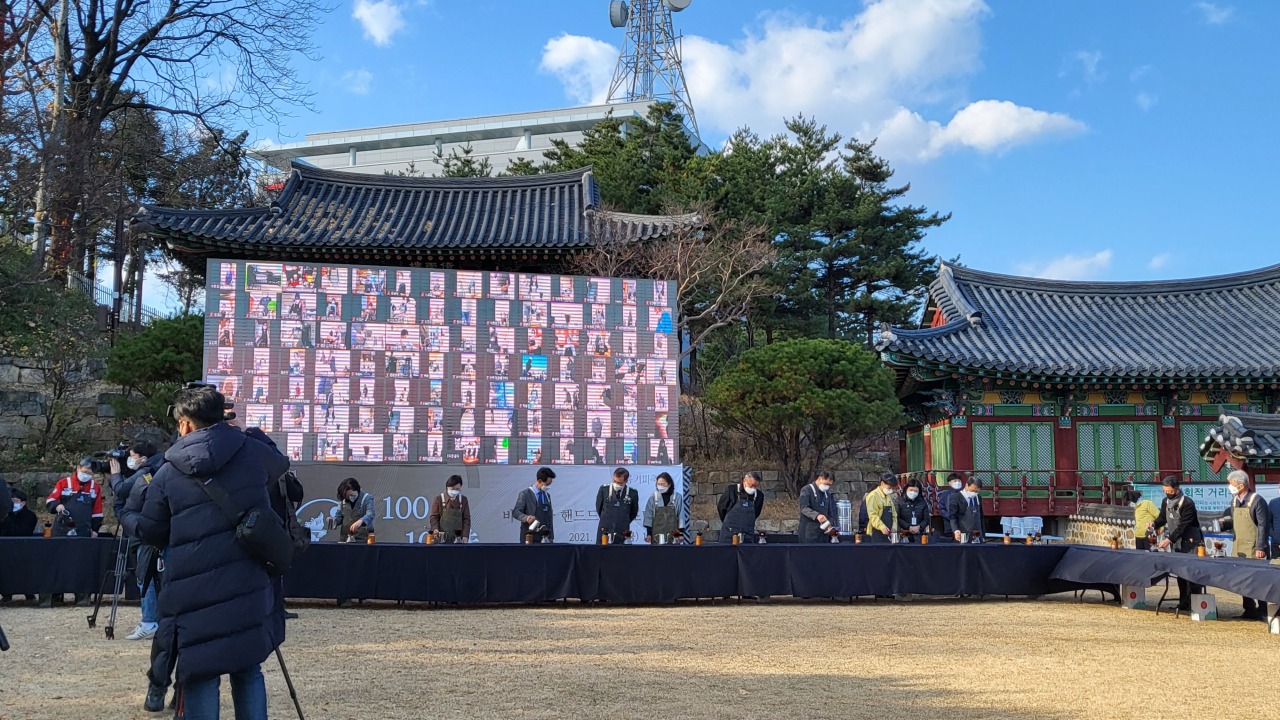 The festival’s signature program, a performance called “100 People 100 Tastes,” is held as a hybrid event on Saturday. (Kim Hae-yeon/The Korea Herald)
GANGNEUNG, Gangwon Province -- After a two-year break forced by the pandemic, the long awaited Gangneung Coffee Festival returned for its 13th edition, Thursday to Sunday.

With the slogan, “Nonetheless, coffee,” some 80 coffee-themed booths were set up at Daedohobu Gwana, a site where central government officials from the capital visiting the region stayed during the Goryeo Kingdom and Joseon era.

“Compared to the 2019 festival, I can see how the public has become much more articulate about their taste preferences of coffee,” Lee Jun-hyeong, chair of the Gangneung Coffee Research Society, who also trains baristas in the city, told The Korea Herald on Saturday. 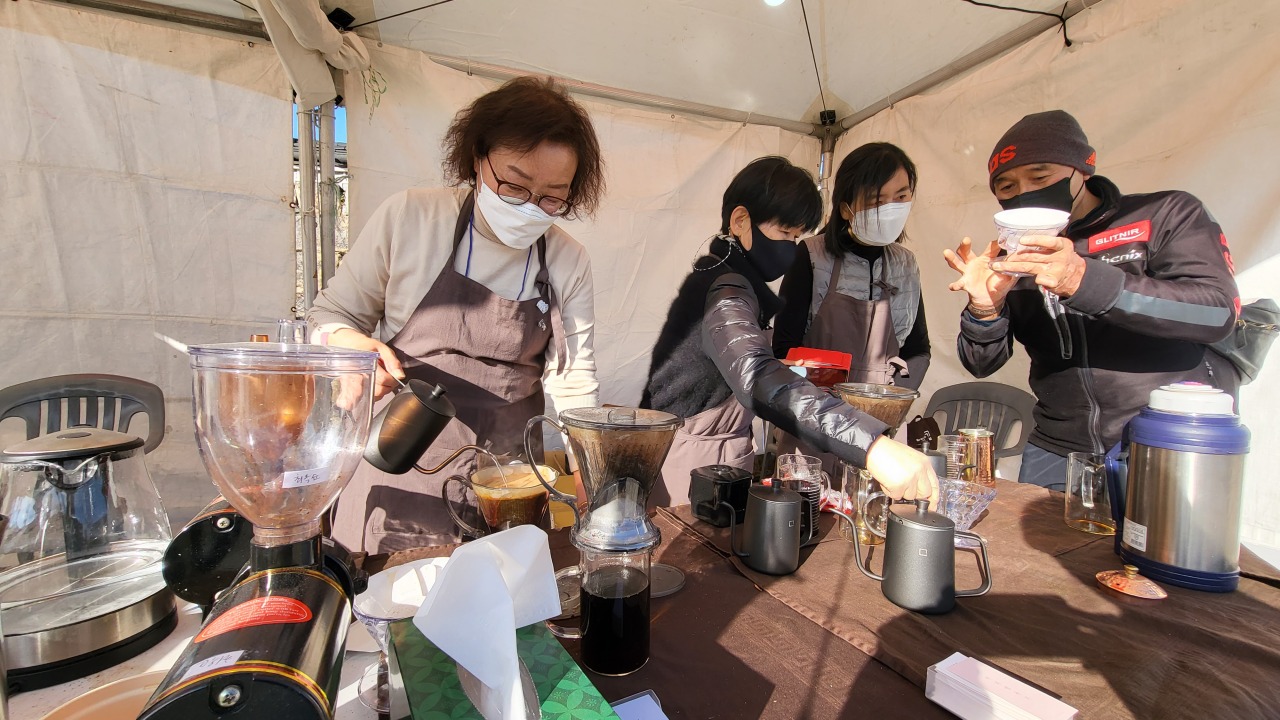 Members of the Gangneung Coffee Research Society present hand-drip coffee extracting skills at the Gangneung Coffee Festival. (Kim Hae-yeon/The Korea Herald)
“Just a few years ago, 8 in 10 would have preferred dark-roasted nutty flavors, with pronounced bitterness. These days, aromatic and moderately acidic coffees are getting more spotlight,” Lee said. Visitors to the tasting event ask for specific types of bean, or aroma notes, and discuss the process of extraction in detail, according to Lee.

Yang jin-ho, president of the Gangneung Coffee Festival’s executive committee, hoped for more foreign visitors to come and enjoy the festival, showing confidence in the unique coffee culture of Korea.

“The festival has had an average of 500,000 visitors annually since its first opening in 2009. Koreans not only enjoy tasting coffee itself, but love spending time with a cup of coffee in a cozy atmosphere. I believe Gangneung is a city that has such value, since it maintains traditional streets and houses on every corner, along with cafes.” Yang told The Korea Herald. 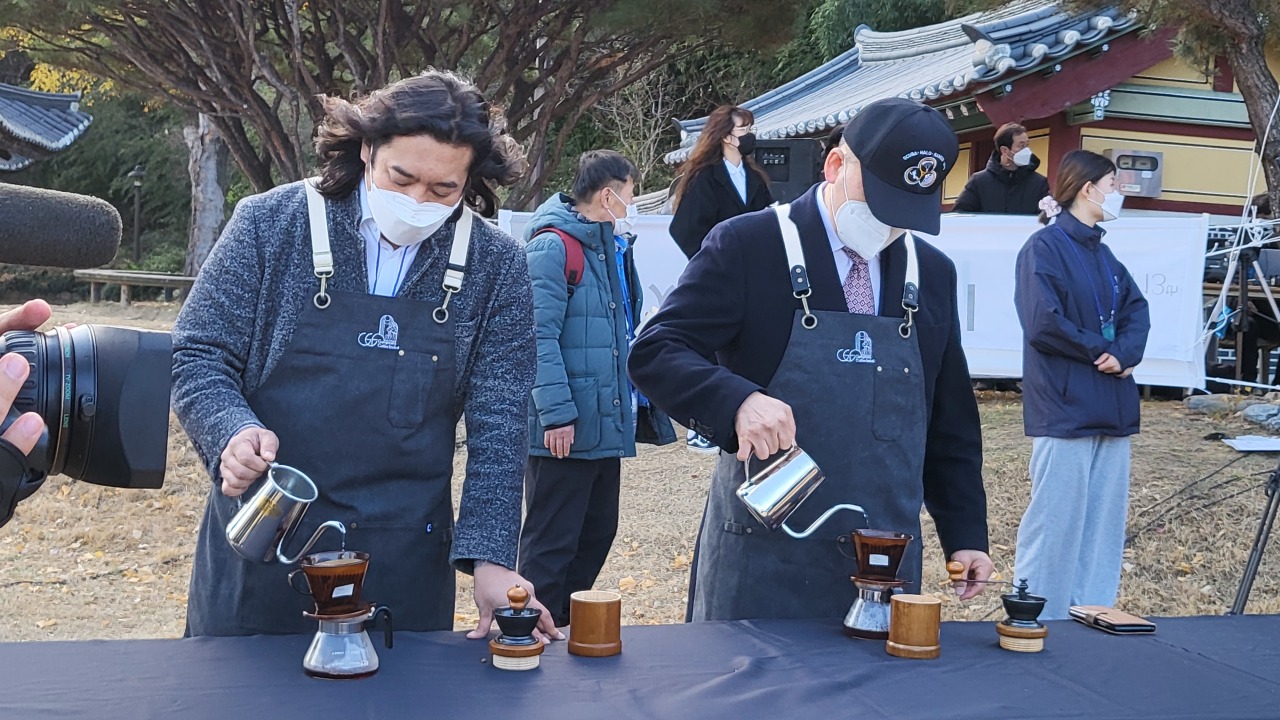 Since the time of the Silla Kingdom (57 BC-935), tea culture has been prominent in Gangneung, a coastal town on the east coast known for the quality of its water.

Historical records show that coffee landed in Korea in the early 1860s. Emperor Gojong enjoyed drinking coffee at Deoksugung, his palace near today’s City Hall in Seoul, while receiving important guests. The first coffee advertisement in the nation was published in Tongnip Sinmun, also known as the Independent, in September 1896, when a German merchant opened a shop in Jeong-dong, a diplomatic enclave in Seoul.

Some 100 years later in the early 1980s, coffee’s popularity reached the east coast city of Gangneung along the scenic Anmok Beach, where instant and canned coffee vending machines proliferated.

A decade later, the first hand drip cafes opened, also along the beach, attracting visitors with full-flavored coffee. Some of Korea’s legendary coffee brewers settled down in Gangneung during this time.

On site, around 40,000 multiuse cups were prepared to be given out to festival visitors and returned later to relevant companies for reuse. 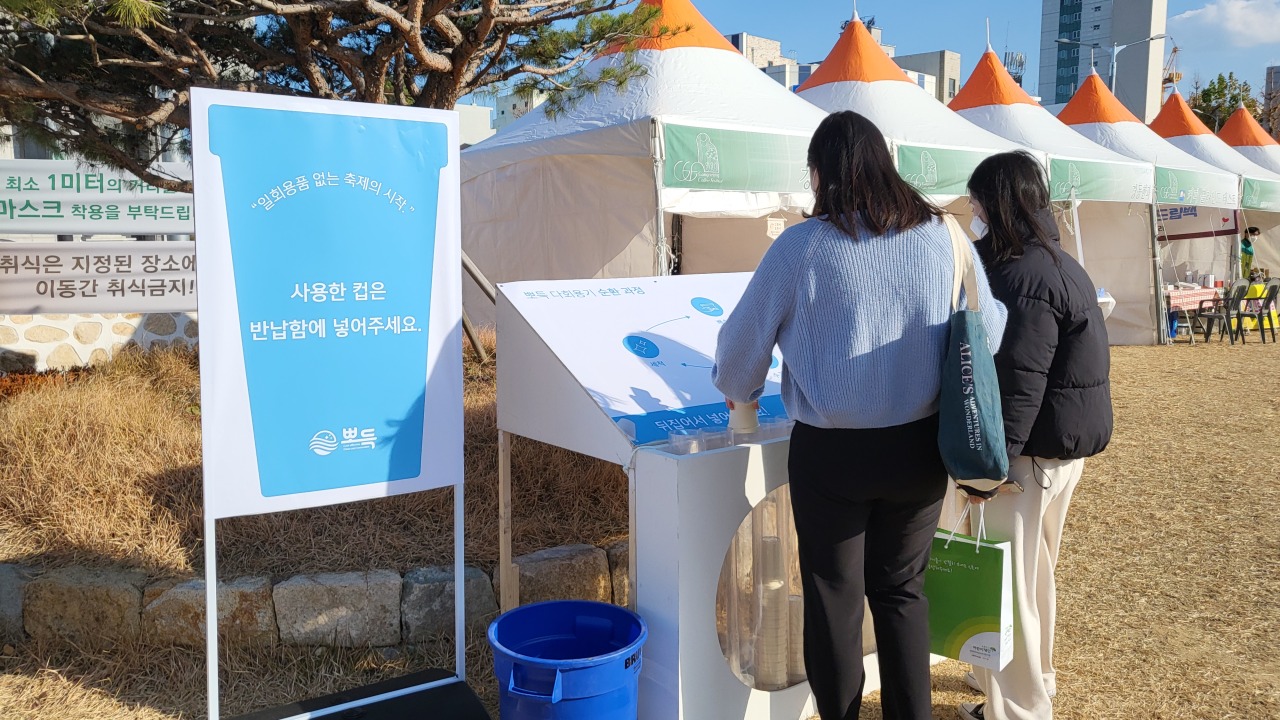