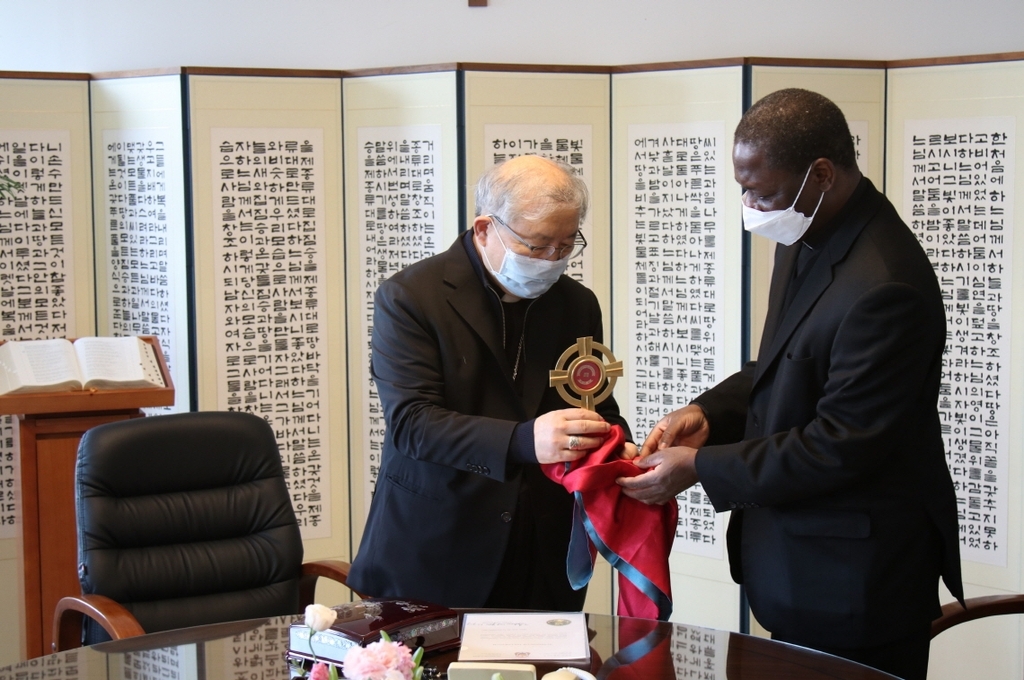 Cardinal Andrew Yeom Soo-jung, the archbishop of Seoul, handed over the relic to Monsignor Julien Kabore, charge d'affaires of the Apostolic Nunciature in Manila, in a meeting held in Seoul the previous day, according to the Catholic Archdiocese of Seoul.

The remains will be enshrined in the Cathedral of St. Joseph of the Archdiocese of Koupela in Burkina Faso. The church, which was newly built in the eastern city of Burkina Faso, was funded by a South Korean Catholic community in Seoul.

Kim was ordained as the first Korean priest in 1845 but was persecuted and executed for practicing Christianity the following year at the age of 25. He was canonized as a saint by Pope John Paul II during his visit to South Korea in 1984.

The Seoul Archdiocese said Kabore, who was born in Burkina Faso, earlier asked Cardinal Yeom to let the relic be placed in his country, commemorating the 200th birth anniversary of the saint in 2021.

"By wrapping up our celebration of Kim's bicentenary, I am grateful that I can give the remains of St. Andrew Kim Tae-gon to Burkina Faso," Yeom was quoted as saying in a statement released by the Seoul Archdiocese.

Kim's remains are currently scattered and enshrined in 200 places at home and abroad, including Rome, Macau and Indonesia.

The South Korean Catholic church has celebrated the birth anniversary for about a year, carrying out various memorial events and campaigns, including pilgrimage programs and special services across the country.