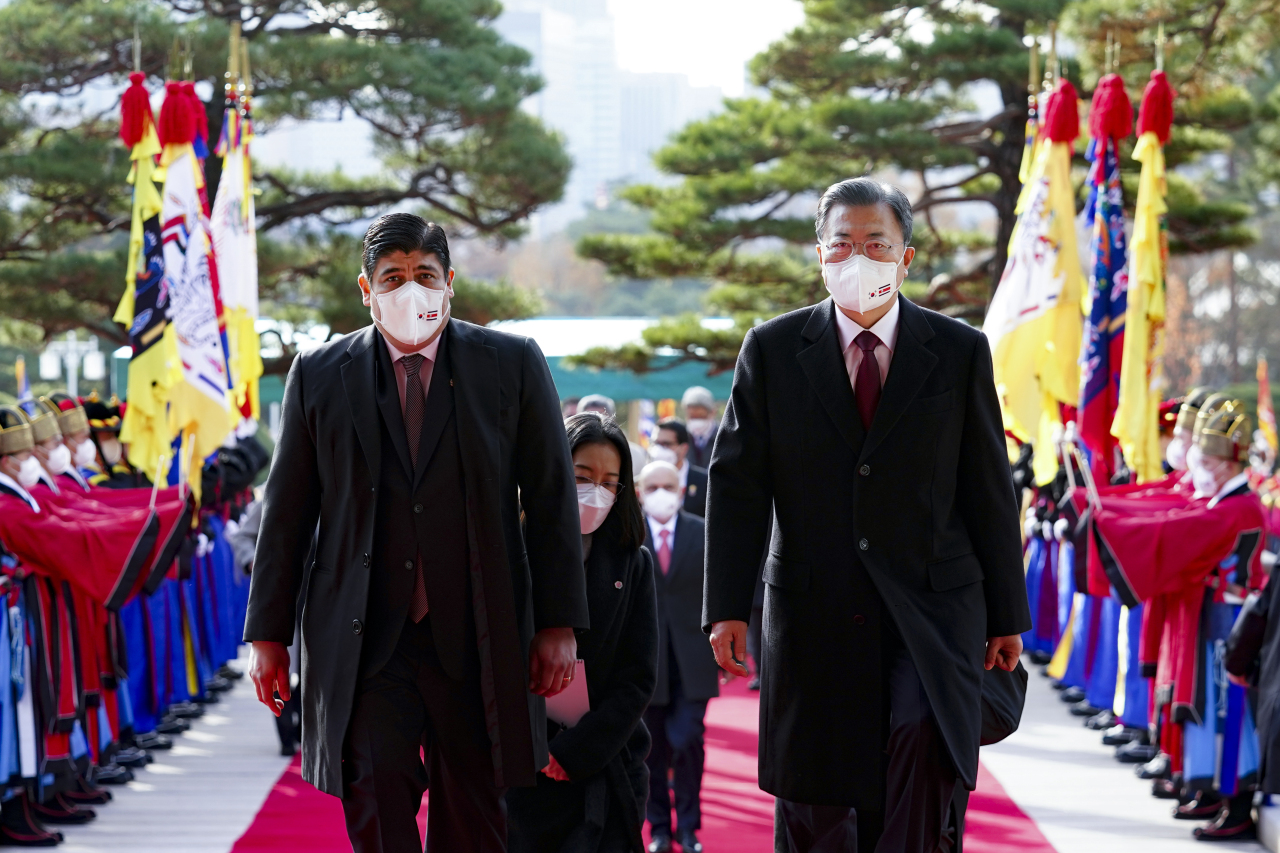 “Next year is a special year for the 60th anniversary of diplomatic relations between the two countries. The two have cooperated in various fields based on common values such as democracy, human rights and peace,” Moon said.

“Today, we upgrade the relationship between the two countries to an ‘action-oriented comprehensive partnership.’ The two countries will get closer now. We look forward to practical and concrete results in various fields including eco-friendly, digital, science and technology and infrastructure.”

He hoped Korea would recognize Costa Rica as a strategic partner.

South Korea and Costa Rica have continued to expand trade and investment since the free trade agreement entered into force in November 2019.

The two leaders agreed that digital and eco-friendly growth is essential for the post-COVID-19 economic recovery. They decided to link the Korean version of the New Deal policy with Costa Rica’s “3D” -- digitalization, decarbonization and decentralization -- economic achievement policy.

Moon asked Alvarado to pay attention to Korean companies with experience and technology to participate in the digital and eco-friendly infrastructure projects promoted by the Costa Rican government.

Costa Rica announced the “2020-2050 National Land Development Strategy for Inclusive and Decarbonization” in March to build the 3D economy. To this end, it announced plans to invest $15.3 billion (34.7 percent of its gross domestic product) by 2050.

The two leaders agreed to strengthen government cooperation and corporate exchanges in digital technology and the environment to recover the economy after COVID-19. They also decided to seek new partnerships in the aviation and space industries, hydrogen economy, cultural content and tourism.

They will also strengthen exchanges through the Central American Integration System and the Korea-Central America free trade agreement while discovering and implementing triangular cooperation projects with Guatemala, El Salvador and Honduras next year.

Immediately after the summit, four memorandums of understanding with Costa Rica, including science and technology, digital government and environmental cooperation, were signed with the two leaders present.