[ The Korea Herald – Send E-mail ]
[What’s your say?] A ‘runaway’ officer
An inexperienced police officer ran from a crime scene, leaving two victims alone with a knife-wielding attacker. Was this a dereliction of duty?
By Korea Herald
Published : Nov 23, 2021 - 14:40
Updated : Nov 23, 2021 - 14:44
A neighbor had a grudge against the family downstairs and attacked them with a knife in the western city of Incheon on Nov. 15. The mother was stabbed in the neck, leaving her with grave injuries, and the rest suffered multiple knife wounds. This could have been just another shocking crime story if it hadn’t happened in the presence of a police officer. 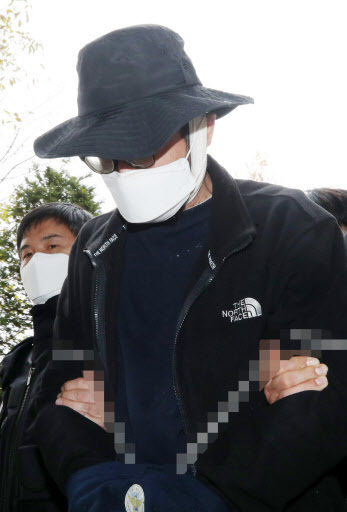 A suspect in the Incheon family stabbing is transferred to the Incheon District Court for his arrest warrant hearing on Nov. 17. Yonhap
The officer’s actions -- or inaction -- sparked debate over the responsibility the police have to fight crime and protect the public. It has now spilled over to the political arena, with the leader of the nation’s main conservative faction making an issue of the officer’s gender and calling for an end to affirmative action in police recruitment. (There is no evidence that the officer was hired as part of an affirmative action program.)

Here’s the question. We say it is the duty of the police to protect the public. But does that involve officers risking their own lives? How far can we expect them to go to keep us safe?


Some facts about the case

- The attack took place in a residential building in Incheon. The victims -- a family of three -- lived on the third floor, and the attacker was a man in his 40s who lived a floor up. The family reported the man for repeatedly menacing and harassing them. It was their fourth complaint about the man, and their second on that day.

- The officer was a 20-something rookie about six months on the job. She was dispatched to the family’s home with an older and more experienced partner. She had a stun gun and a baton with her. The senior officer was armed with a pistol.

- The attack happened after the senior officer told the neighbor to go home and then stepped outside the building with the father to talk. The neighbor had gone to his place as instructed, but he came back with a knife.

- The attacker’s first target was the mother. After he began stabbing her, the young officer “ran downstairs screaming,” as the father described the scene later, having met her in the stairs as he rushed inside after hearing her scream. It was the father who saved his daughter from the assailant. He and the daughter were both injured after confronting the knife-wielding man with their bare hands. The police did not return until after the father had knocked the assailant unconscious.

- The younger officer later said she had left the scene to request help. Both she and her partner had walkie-talkies with them. According to some media, she is having trouble remembering her actions on that day because of the trauma of witnessing a stabbing. Both officers said they couldn’t reenter the building because the lobby door had closed and locked automatically.

- Since the attack, the head of the police station has been dismissed and the two officers involved are suspended from work.