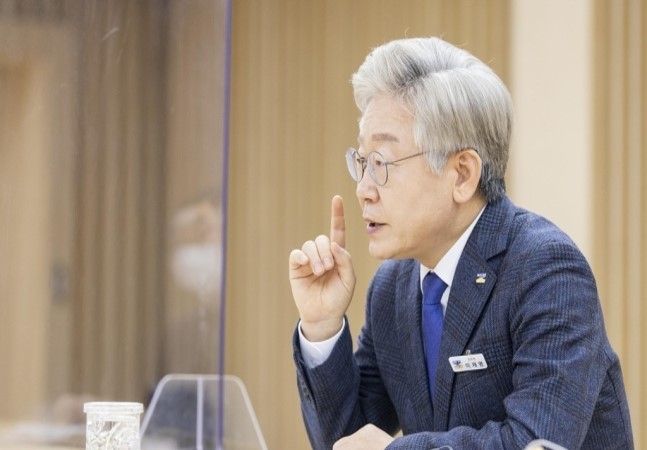 Lee’s envisioned tax is similar to the nation’s comprehensive real estate holding tax, which is levied on high-priced real estate. But Lee hopes to impose taxes on all land, meaning homeowners would pay taxes on the land their homes occupy.

This tax could bring in about 50 trillion won ($42 billion) on an annual basis, Lee has said. He plans to use the money to bankroll his universal basic income project.

Lee believes the tax would curb real estate speculation, counter asset polarization and minimize tax resistance. According to Lee, about 80 percent to 90 percent of citizens stand to benefit from the proposed tax system.

He came up with the plan during the Democratic Party’s primary race ahead of the 2017 presidential election and has consistently advocated for it ever since.

During his tenure as governor of Gyeonggi Province, he once said, “If the central government feels burdened by introducing it nationwide, allow local governments to establish it as a local tax.”

In response to critics who called the proposed tax an infringement of property rights, Lee said on Facebook on Monday, “If you object to the tax for fear of losing money when you don’t even belong to the top 10 percent of landholders, you are a fool manipulated by malicious media and corrupt political forces.”

Some experts share Lee’s view that social inequality is widening due to soaring housing prices and real estate speculation.

Han Moon-do, a professor at Yonsei University’s graduate school of political science, said, “The direction of the land ownership tax is something we should consider in the mid- to long term.

“Over the past decades, wages and interest have not risen much, but only land prices have surged,” he said, adding this needs to be addressed in some way.

According to the local civic group the Citizens’ Coalition for Economic Justice in December 2019, private land prices had more than quadrupled since 1999, resulting in 6,600 trillion won in unearned income for a few. Seventy percent of the population does not own land. The figure was 14 times higher than total wage increases during the same 20-year period.

But Han says the plan should not be executed in a rush and would require good communication and persuasion.

“As he hurriedly made a political pledge and tied it with basic income, it seems to be populism and draws backlash from many,” he said.

Park Sun-koo, chief of the Korea Research Institute for Construction Policy’s economics and finance research division, agreed that the concept should be pondered in the long term.

South Korea’s widening inequality was caused by disparities in assets, not income, he said. According to OECD data, the level of income equality in South Korea is similar to levels seen among other member nations, but uneven wealth distribution is a growing problem here.

“It is necessary to ponder over reorganizing the nation’s tax structure as Korean society ages and expenditures continue to increase, but revenues are limited,” he said.

Many, however, oppose Lee’s promise.

Son Jae-young, a professor at Konkuk University’s Graduate School of Real Estate Studies, said such a tax would infringe on private property rights.

He does not believe the real estate issue is responsible for social inequality.

“Millions of Koreans became middle-income people after becoming homeowners. And as the (asset) prices go up, they can stably retain their middle-class status,” he said.

He also doubts whether the proposed tax could generate 50 trillion won in tax revenue.

“Will they levy it on agricultural land? What about a person with one house? Companies that run factories and small business owners?” Son asked.

“If they exclude taxes for this and that reason, actually there are not many left to levy it on,” he said.

Another presidential candidate, former Deputy Prime Minister Kim Dong-yeon, said Tuesday, “The idea of collecting taxes from landowners and distributing the money equally to the people is a very dangerous idea.”

He said it would draw considerable tax resistance from individuals who own land for residential purposes, not for speculation purposes.