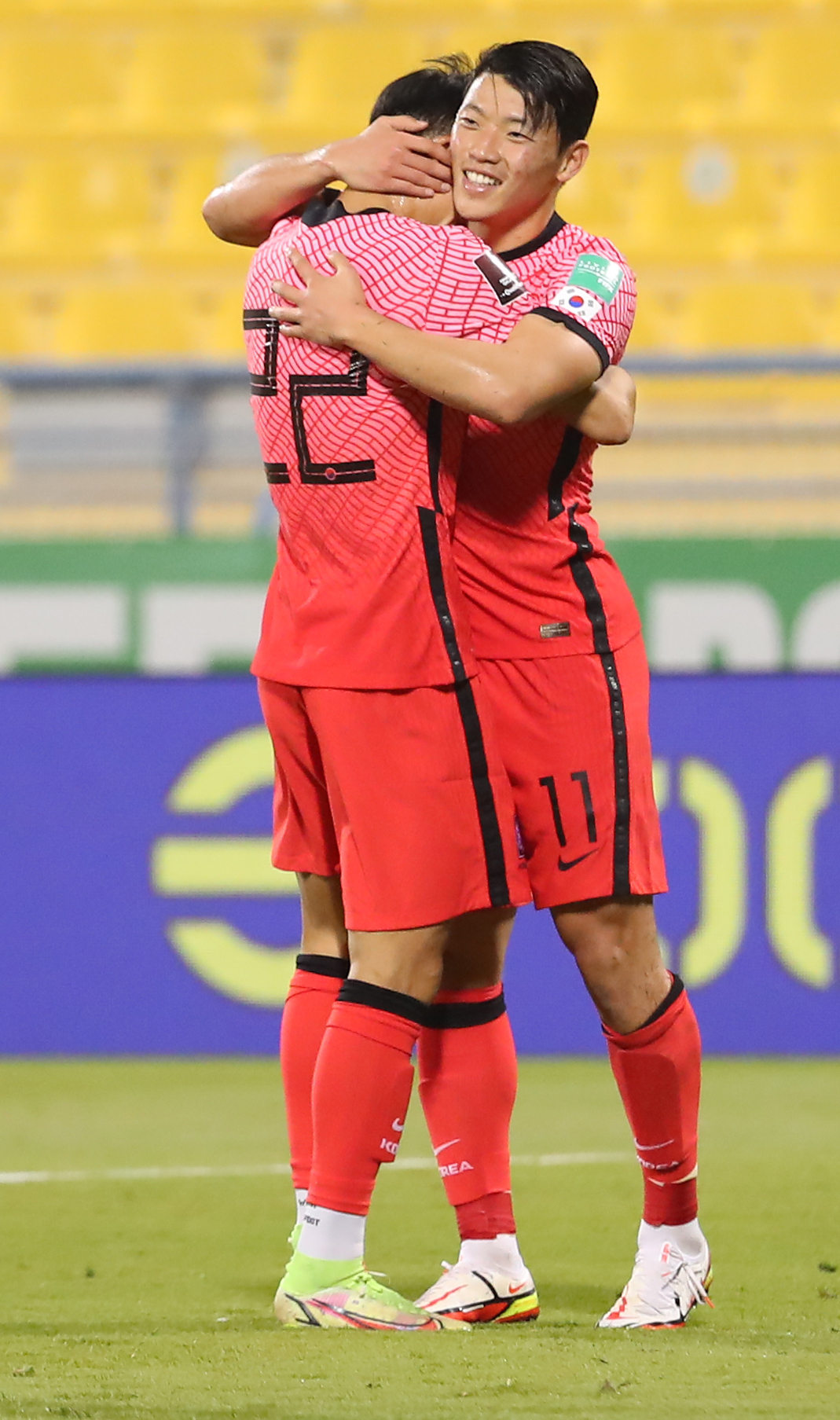 Hwang Hee-chan of South Korea (R) congratulates teammate Jeong Woo-yeong on his goal against Iraq during the teams' Group A match in the final Asian qualifying round for the 2022 FIFA World Cup at Thani bin Jassim Stadium in Doha on Tuesday. (Yonhap)
South Korea have defeated the United Arab Emirates (UAE) and Iraq in succession in their World Cup qualifying campaign, using identical starting lineups.

But how they achieved those results couldn't have been more different, as the Taeguk Warriors proved that they can win matches in a variety of ways.

Three different players scored in South Korea's 3-0 victory over Iraq at Thani bin Jassim Stadium in Doha on Tuesday (local time). It was South Korea's fourth win in six contests in Group A during the final Asian qualifying round for the 2022 FIFA World Cup.

South Korea had enjoyed a 1-0 win over the UAE at home last week, a fairly entertaining match in which South Korea struck the woodwork three times. South Korea attempted 22 shots and caused havoc in the attacking zone all match with high pressure. They played with controlled abandon.

Against Iraq, though, South Korea were far more methodical early on. With the opponents setting up a low block, South Korea patiently passed the ball around to get Iraqi players to bite and move out of position. When that didn't happen, South Koreans simply took what their opponents gave them without forcing the issue.

It also had the added benefit of conserving players' energy.

They had made a long trip to Qatar over the weekend, and the same 11 players who had forechecked so aggressively against the UAE couldn't have been at full strength in this one.

Their patience paid off in the opening goal by Lee Jae-sung in the 33rd minute. The midfielder was the beneficiary of a botched shot attempt by Kim Jin-su on the left side of the box. The sequence began with Son Heung-min sending a quick through ball to find the full back Lee Yong and leave the Iraqi defenders scrambling.

The goal provided a measure of redemption for Lee Jae-sung, who had been subjected to cyberbullying last month after a costly turnover that led to Iran's equalizer in a 1-1 draw in Tehran.

Lee had another gaffe in the 13th minute against Iraq, turning the ball over in his own box, and breathed a sigh of relief when Ibrahim Bayesh missed the target.

The goal was Lee's first for South Korea since March 2019.

Iraq began to assert themselves more in the second half, and South Korea exploited the extra space that opened up as a result.

Son once again was in the middle of it all for the second goal.

It was his initial pass that led to forward Cho Gue-sung's opportunity deep in the box, and Cho ended up drawing a penalty against Ali Adnan.

Son took the penalty himself -- doing it twice after Jeong Woo-yeong moved into the box before the shot -- converting it for his 30th international goal in his 96th match.

It was at that very stadium that Son had netted his first goal for the national team in 2011 at the Asian Football Confederation (AFC) Asian Cup. Son is now tied for sixth on South Korean all-time goals list, and sits four caps from joining the Century Club.

And a few minutes later, Son helped Jeong get his first international goal. Son danced his way into the box and passed on a shooting opportunity to find Hwang Hee-chan on the left. Hwang then rolled the ball toward Jeong to his right, as the 22-year-old confidently shot it home to make it 3-0.

South Korea had made 529 passes against the UAE, but in an illustration of a vastly different approach, they had well over 400 just in the first half against Iraq, en route to completing 687 passes.

South Korea head coach Paulo Bento complimented his players for making adjustments and improving their overall play in the second half.

"I think it was a fair victory," he said at his postmatch press conference. "We had more difficulties in the first half than in the second half. In the second half, we were more aggressive with the ball and we used the space behind the opponent defensive line in a good way."

South Korea improved to 14 points after six matches, two back of Iran in the group. With the UAE in a distant third at six points, South Korea and Iran are virtual locks to secure the two automatic berths out of Group A.

But Bento wasn't ready to celebrate yet, saying he was already thinking about the next two matches in January.

"We are not yet in the World Cup," he said. "We should keep trying to improve our process and it's what we're going to do in the next training camp." (Yonhap)