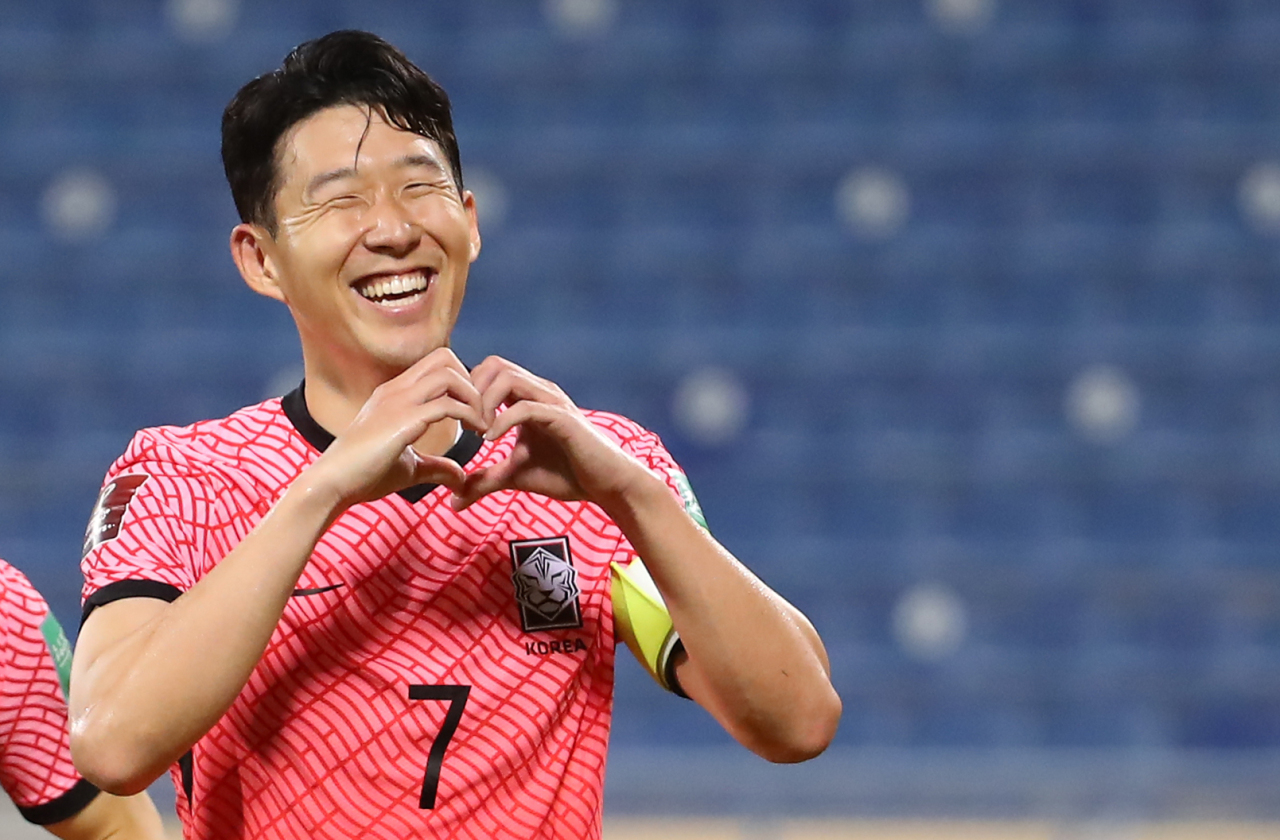 Son Heung-min of South Korea celebrates his goal against Iraq during the teams' Group A match in the final Asian qualifying round for the 2022 FIFA World Cup at Thani bin Jassim Stadium in Doha on Tuesday. (Yonhap)
He is still very much active, but Son Heung-min's latest goal for South Korea made it feel like his career had come full circle.

Son scored his 30th international goal in a 3-0 World Cup qualifying victory over Iraq at Thani bin Jassim Stadium in Doha on Tuesday (local time). Son is now tied for sixth with three others on the all-time South Korean goal scoring list, and leads all active national team players.

Son now has 96 caps, four from joining the Century Club, and his legacy as one of the country's all-time greats, at just 29 years of age, keeps on growing.

That the 30th goal came at the same stadium where he netted his first 10 years earlier provided a neat moment of celebration for Son.

Son had his first goal against India during the 2011 Asian Football Confederation (AFC) Asian Cup. Son was still a few months shy of his 19th birthday then. He celebrated the goal by making a heart sign with his hands.

Son has since switched to a "take a picture" pose, making a small camera with his thumbs and index fingers after each goal. But after converting a second-half penalty against Iraq, Son went back to the heart sign.

His teammate Jeong Woo-yeong almost ruined it, though, as he was caught encroaching the box before Son took the spot kick. Son had to retake the shot and converted it again. The camera was back on for the captain.

At his postmatch press conference, Son said he hadn't been aware of having scored at the same stadium until he arrived for a training session on Monday. And once national team staffers had reminded Son of that history, the memory of making the heart sign came back to him.

"I think fans enjoyed seeing me with that sign back then," Son said. "So I wanted to do it again as a 'thank you' note to them."

As the team captain, Son had a lot more on his mind than just his goal.

"Everyone played with such a great attitude and mindset, and this has been the most gratifying victory (so far in the final qualifying round)," Son said. "As captain, I am grateful for the players who didn't get into the match but still supported the team."

South Korea improved to 14 points from four wins and two draws, with four matches remaining in Group A of the final round. They appear to have locked down one of two automatic spots, along with Iran, for the 2022 FIFA World Cup. But Son wasn't yet ready to celebrate anything.

"We have been getting better and better as a team, and I am proud of my teammates," Son said. "But we haven't secured anything yet. We want to keep playing well and finish this round on a strong note. Even if we grab our berth early, we want to play well until the very end to show that we're a much better team than the previous final qualifying ruond (for the 2018 tournament)." (Yonhap)