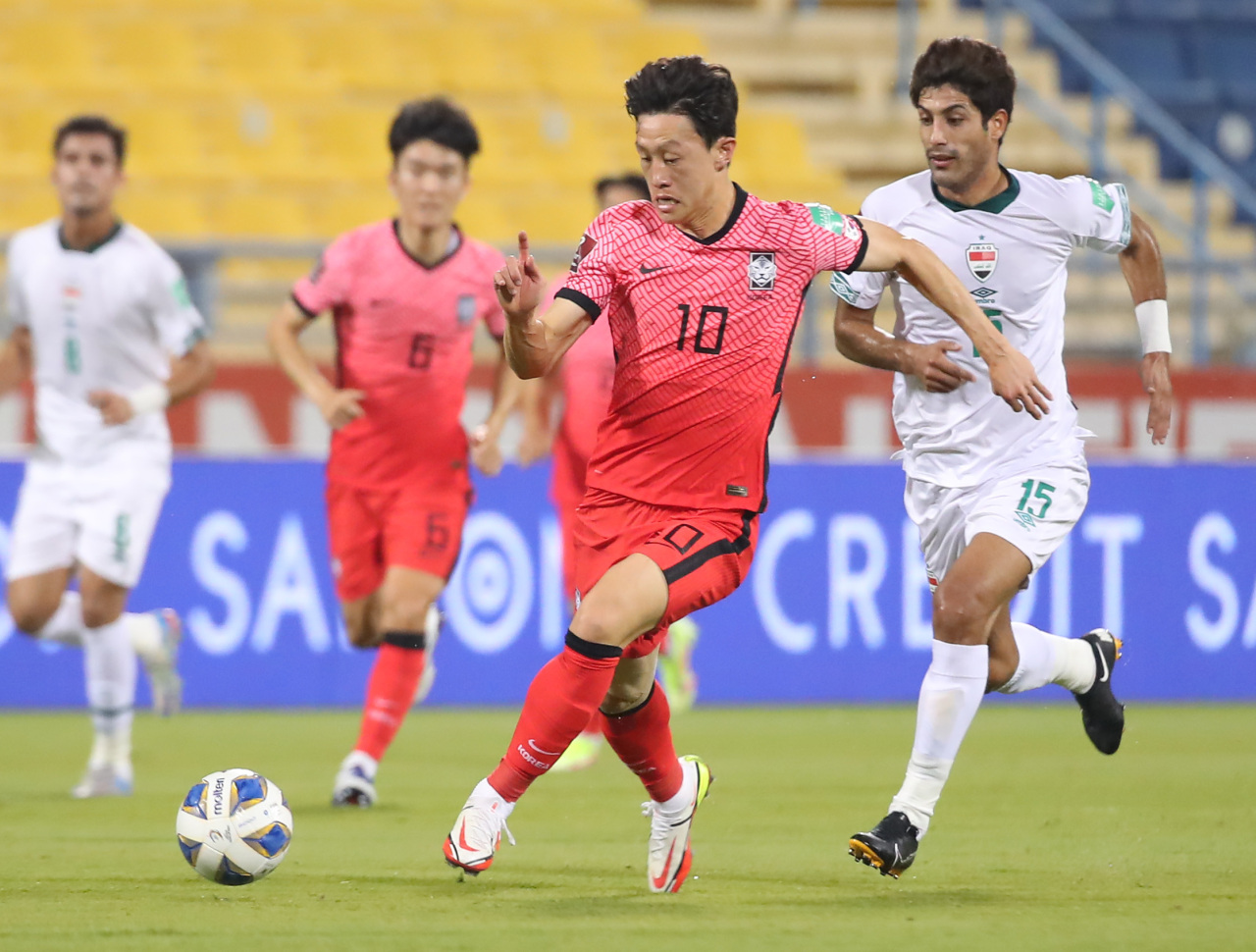 Lee Jae-sung of South Korea (L) dribbles past Mohammed Ali Abbood of Iraq during the teams' Group A match in the final Asian qualifying round for the 2022 FIFA World Cup at Thani bin Jassim Stadium in Doha on Tuesday. (Yonhap)
Captain Son Heung-min scored his 30th international goal while young midfielder Jeong Woo-yeong netted his first, as South Korea beat Iraq 3-0 in their World Cup qualifying match in Doha on Tuesday.

Midfielder Lee Jae-sung opened the scoring in the first half for the clean sheet victory at Thani bin Jassim Stadium, helping South Korea extend their undefeated streak to six matches in the final Asian qualifying round for the 2022 FIFA World Cup.

With 14 points from four victories and two draws, South Korea remained in second place in Group A. Iran stayed on top by improving to 16 points, thanks to their own 3-0 victory over Syria on Tuesday. The top two countries from the group after 10 matches will automatically qualify for the World Cup.

Iraq, who have been playing home matches in Qatar for security reasons, now have four draws and two losses.

South Korea's three previous victories were all by a single goal, and the three goals are the most they have scored in one game so far in this round.

South Korea played a fairly entertaining match against the United Arab Emirates at home last week, creating one chance after another with aggressive forechecking in a 1-0 victory that could have been more lopsided.

Against Iraq's low block, though, South Korea were more patient with the ball in the early going, as they kept passing the ball all across the field in search of opening in the attacking zone.

Son, the Tottenham Hotspur star playing at a stadium where he had his first international goal in 2011, took a weak left-footed shot right at goalkeeper Fahad Talib in the 16th minute. Some eight minutes later, fellow winger Hwang Hee-chan got a fortuitous bounce off a defender and had a decent look from the top of the box, but his shot also flew right at Talib. Cho Gue-sung's shot in the 27th minute also went into the chest of the Iraqi custodian.

South Korea kept on knocking on Iraq's door, and it finally opened in the 33rd minute.

Son sent fullback Lee Yong free on the right wing with a through ball, and his cross found Kim Jin-su on the opposite side.

Challenged by Mohammed Qasim from behind, Kim couldn't quite put on a shot, but managed to get the ball across to Lee Jae-sung, who struck it home with his left foot from the right side of the box.

The match opened up a bit in the second half, with Iraq pushing back on offense for an equalizer.

Instead, South Korea doubled their lead in the 74th minute on Son's penalty, drawn when Ali Adnan fouled forward Cho Gue-sung in the box to foil a scoring opportunity.

Son had to take his penalty twice. He put the initial shot into the bottom right corner, but it was wiped out when Jeong Woo-yeong got caught encroaching the box before the shot was taken. On the retake, Son scored into the center of the net while Talib dove to his right.

Jeong joined the party five minutes later. Son drove into the box on the right side and passed on an open look to defer to Hwang Hee-chan on the other side. Hwang then teed it up for Jeong, who struck the ball to the top shelf for his first international goal in his third appearance. (Yonhap)