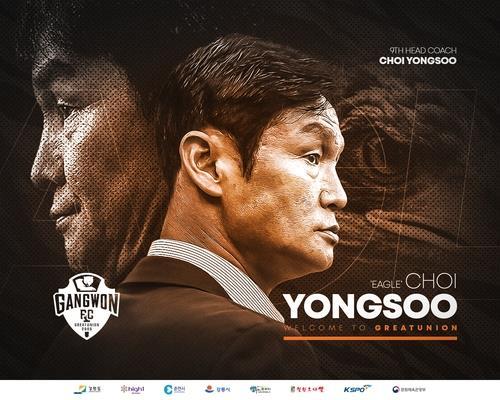 Choi, 48, is taking over a team in danger of relegation from the top-flight K League 1.

With two matches remaining this season, Gangwon FC are in 11th place, second from last, with 39 points, only three ahead of Gwangju FC. The last-place club in the K League 1 will be automatically relegated to the K League 2 for next year. The 11th-place team will face a K League 2 playoff winner in the promotion-relegation playoff.

Gangwon sacked Kim Byung-soo from the bench on Nov. 4, a day after losing to Pohang Steelers 4-0.

Following an international break, Gangwon FC will return to action on Nov. 28 against FC Seoul.

Choi will be coaching his second K League club. He managed FC Seoul to the K League championship in 2012 and then to the FA Cup title in 2015, while also finishing runners-up at the 2013 Asian Football Confederation (AFC) Champions League.

Choi also had a stint in China and had a second tour of duty with FC Seoul in 2018 to save the team from relegation.

He resigned in July last year and had been working as a television commentator.