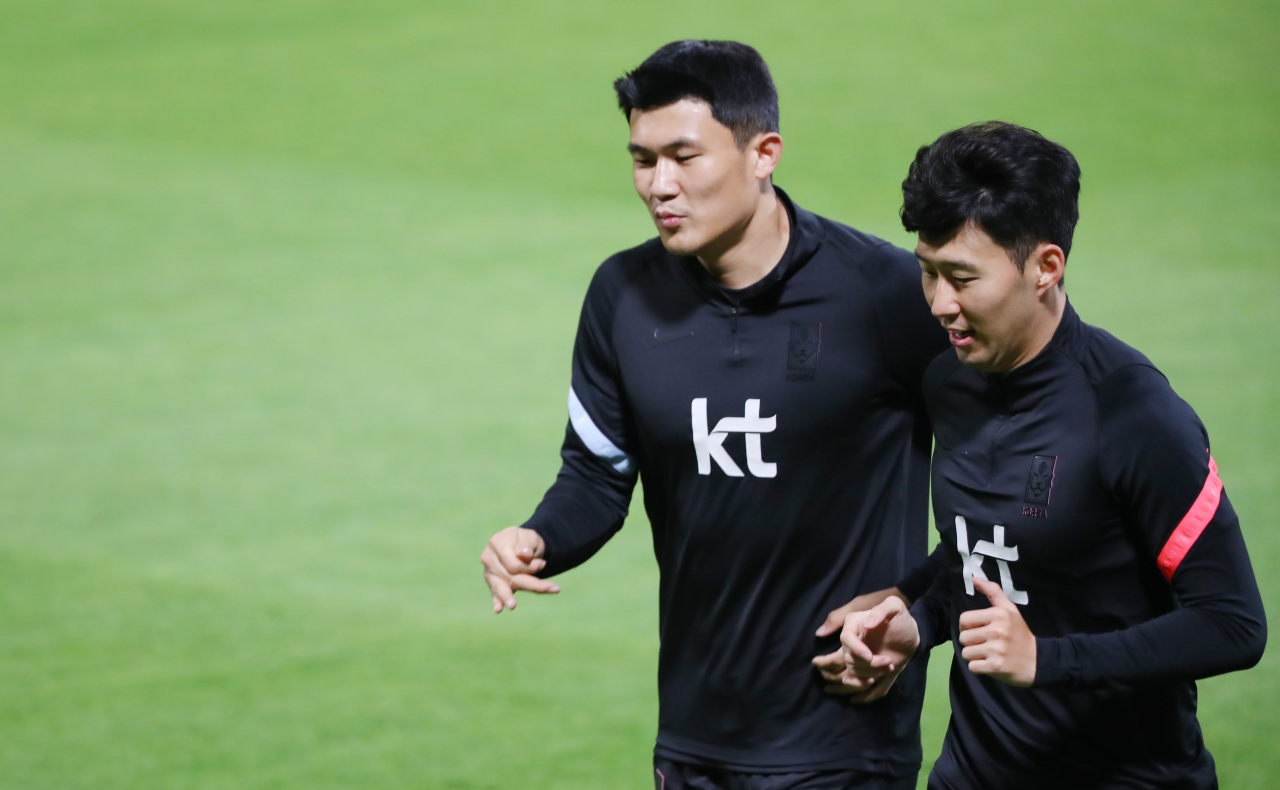 Kim Min-jae (L) and Son Heung-min of the South Korean men's national football team train at Al-Sailiya Sports Club in Doha on Sunday, in preparation for a World Cup qualifying match against Iraq. (Yonhap)
Fresh off a wildly entertaining performance, South Korea will seek to give their fans even more to cheer about in their next World Cup qualifying match against Iraq.

The second meeting between the two teams in Group A of the final Asian qualifying round will kick off at Thani bin Jassim Stadium in Doha at 6 p.m. Tuesday local time, or midnight in Seoul.

Iraq are playing their home matches at neutral venues for security reasons.

Following a 1-0 win over the United Arab Emirates (UAE) last Thursday, South Korea sit in second place in the group with 11 points from three wins and two draws. They're two points back of Iran with five to play. Lebanon are in third at five points.

The top two nations will grab automatic berths for the World Cup, and Iran and South Korea appear to be locks. The third-place teams from each of the two groups will meet in a playoff, with the winner moving on to the last-chance intercontinental playoff.

On top of trying to keep pace with Iran, South Korea will also try to get the better of Iraq after being held to a scoreless draw at home in September.

Iraq are ranked 72nd in the world, 37 spots below South Korea.

They're one of three winless nations in the group with four draws and one loss.

And if South Korea can compete the way they did against the UAE, then goals shouldn't be an issue this time.

The match would have been far more lopsided, had South Korea not struck the woodwork three times. South Korean attackers applied heavy pressure on UAE ball carriers deep in the attacking zone, causing havoc and creating turnovers that led to scoring chances.

Captain Son Heung-min hit the goal post and the crossbar once each. On the first occasion, Son came oh-so-close to netting a jaw-dropping wonder goal after a mad dash from the midfield, and his left-footed shot from the edge of the box hit the left post.

Son apologized to his teammates later for missing out on so many chances they'd created for him and vowed to be better next time.

And he will be returning to the very stadium where he'd scored his first international goal in January 2011. Still just 18 years old then, Son scored one of four South Korean goals over India in the group stage at the Asian Football Confederation Asian Cup.

On defense, Fenerbahce center back Kim Min-jae has been a rock for South Korea. Though he was removed from the UAE match during the second half with an apparent quad injury, Kim told reporters in Doha on Sunday that he was good to go against Iraq.

"I'd love to finish the final round without a loss," Kim said.

"As a defender, I'll try to keep other teams from scoring.

Honestly, I wanted to play the entire final round without conceding any goal. We only have a few matches remaining and I think our focus is in the right place."

That goal came in Son's third international match. He has since racked up 28 more goals over his next 92 matches, and has put together a compelling case as the greatest South Korean football player of all time.

After Tuesday, the final round will resume on Jan. 27 next year and wrap up on March 29. The World Cup kicks off on Nov. 21.