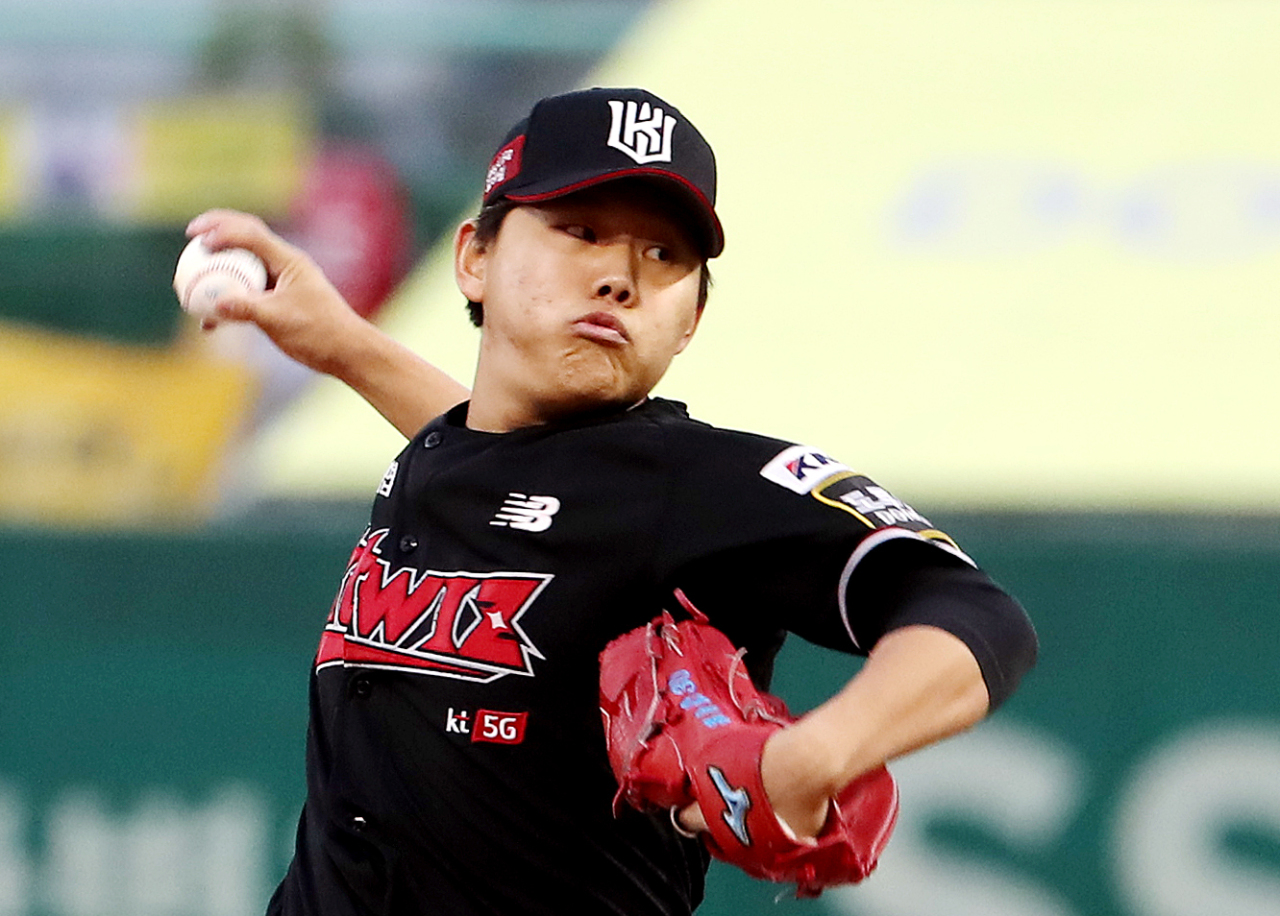 In this file photo from Oct. 30, 2021, KT Wiz starter So Hyeong-jun pitches against the SSG Landers in the bottom of the first inning of a Korea Baseball Organization regular season game at Incheon SSG Landers Field in Incheon, 40 kilometers west of Seoul. (Yonhap)
Though he will be facing the same opponents that eliminated his team from the postseason last year, KT Wiz right-hander So Hyeong-jun won't be out to get his revenge.

"All I am thinking about is winning our first championship," So told reporters Sunday before Game 1 of the Korean Series against the Doosan Bears at Gocheok Sky Dome in Seoul. "It just happened that we'll be playing the Bears again, and I know my teammates and our fans have talked about avenging our loss from last year. But my focus is only on winning the title."

The Bears knocked off the Wiz in four games of the penultimate round in the Korea Baseball Organization (KBO) postseason in 2020. But So, then just 19, more than did his part, tossing 6 2/3 shutout innings in Game 1, only to watch his team lose 3-2. So pitched 2 1/3 innings of one-run ball in relief in Game 5.

During this past regular season, So was a perfect 2-0 with a 1.00 ERA in three starts.

"I've done well against that team, so I'll try to stay confident on the mound," So said. "I will stick to my strengths and let them try to beat me."

So revealed that he grew up a fan of the Bears. Watching them win high-stress postseason games with relative ease this month, So said, "I could see why they've been such a great team for a long time and why I became a fan as a kid."

He started the Wiz's very first postseason game last year but will likely start the third game of the Korean Series on Wednesday, behind two foreign starters, William Cuevas and Odrisamer Despaigne.

"I pitched better down the stretch last year than this year, so from the team's perspective, it only makes sense to go with our veteran guys early this series," So said. "My job is to pitch as well as I can in the game I am starting."

So said he'll try to cherish the opportunity to pitch in the Korean Series in just his second year, knowing that many veterans retire without having played in it once.

"I don't know when I will be back here, so I want to leave it all out on the mound and not have any regrets at the end," So said. "I'll definitely have some jitters but I'll try to channel them into positive energy." (Yonhap)