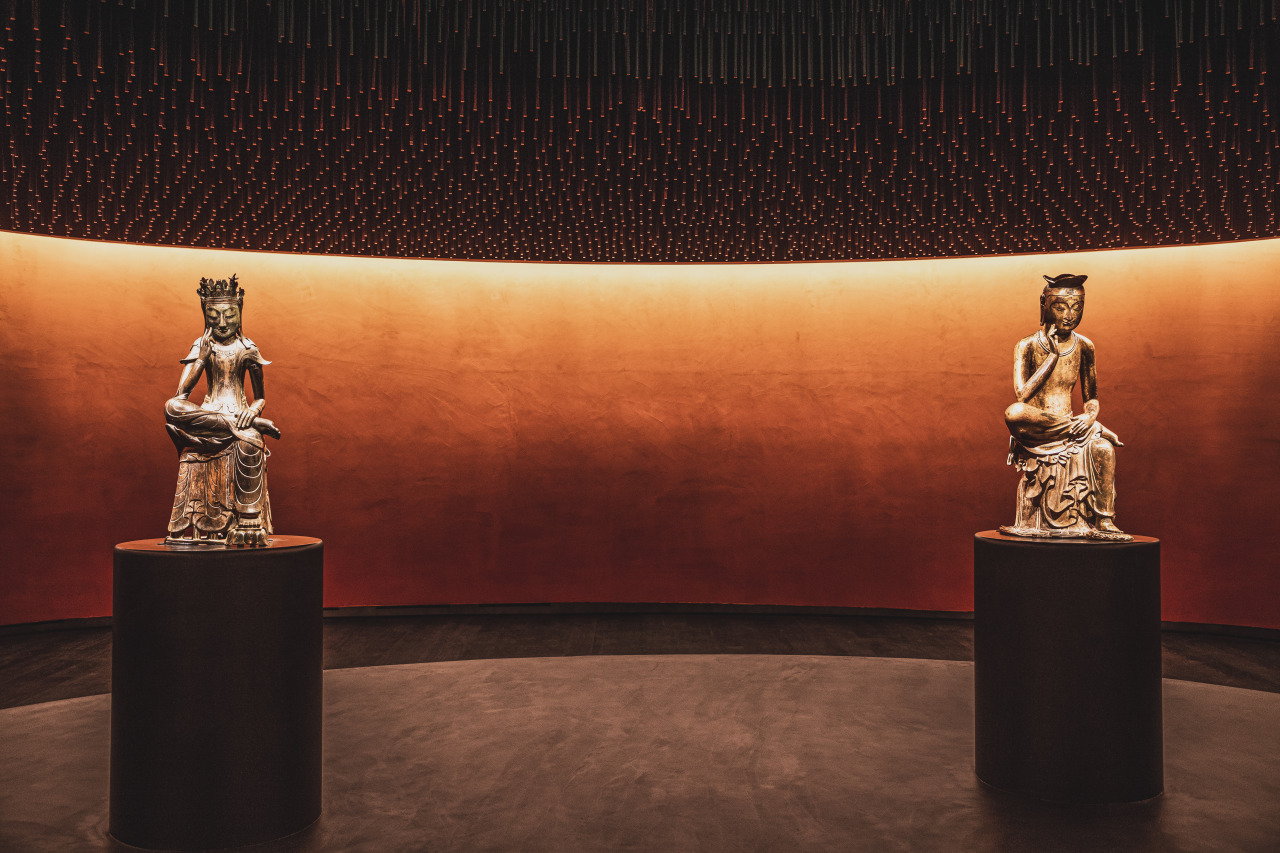 Two Pensive Bodhisattvas, which are designated National Treasures No. 78 (right) and No. 83, are on display in the permanent exhibition hall of the National Museum of Korea (ONE O ONE architects)

For those looking for a moment of peace, the National Museum of Korea has prepared a therapeutic experience through a new permanent exhibition titled “A Room of Quiet Contemplation,” presenting two Pensive Bodhisattvas, which are designated as National Treasures No. 78 and No. 83.

“I created this exhibition with the intention of making Pensive Bodhisattvas the iconic item of Korea,” National Museum of Korea Director General Min Byoung-chan said during a press conference held on Thursday at the NMK. “Korea is a fast-changing country and I hope that people can relieve their stress in this space of contemplation.”

In February, Min announced that he planned to make the statues an iconic exhibit, like the “Mona Lisa” at the Louvre Museum in Paris.

The exhibition hall spans 439 square meters, which is close to the size of a small performance theater. It is specially designed by renowned architect Choi Woo, CEO of ONE O ONE architects.

“I tried to create a space that gives the feeling of becoming united with the energy of the Pensive Bodhisattvas,” Choi said. “I hope that the energy that is accumulated within the statue over the years can slowly rise to the surface and move the minds of future generations.”

A narrow and dark hallway leads to the hall, designed to get viewers used to the dark space and transport them to a world away from reality.

Soon visitors will find one side of the hallway covered with a large screen presenting a video titled “cycle” created by French artist Jean-Julien Puss.

“What you see in this video symbolizes the outer space that endlessly goes through cycles,” NMK curator Shin So-yeon said.

The curator recommended staring at the video for a while before moving on to the exhibition hall to empty the minds.

Once inside the hall, visitors will find a space with only two statues facing forward.

The two Pensive Bodhisattvas look as if they are on a theater stage, both of them striking a classic contemplative pose with one leg perched up on the other knee and the fingers of one hand raised against the cheek.

When walking up to the statues, viewers will notice that the floor, walls and ceiling are all slightly tilted.

“The slanted walls, floor and ceiling make it difficult for the audience to distinguish distance. The space leads to a vanishing point where the statues are positioned,” NMK curator Shin said.

The hall is different from typical museum spaces. Its walls are made with earth, cinnamon and different herbs. The ceiling is designed to resemble a night sky with stars. 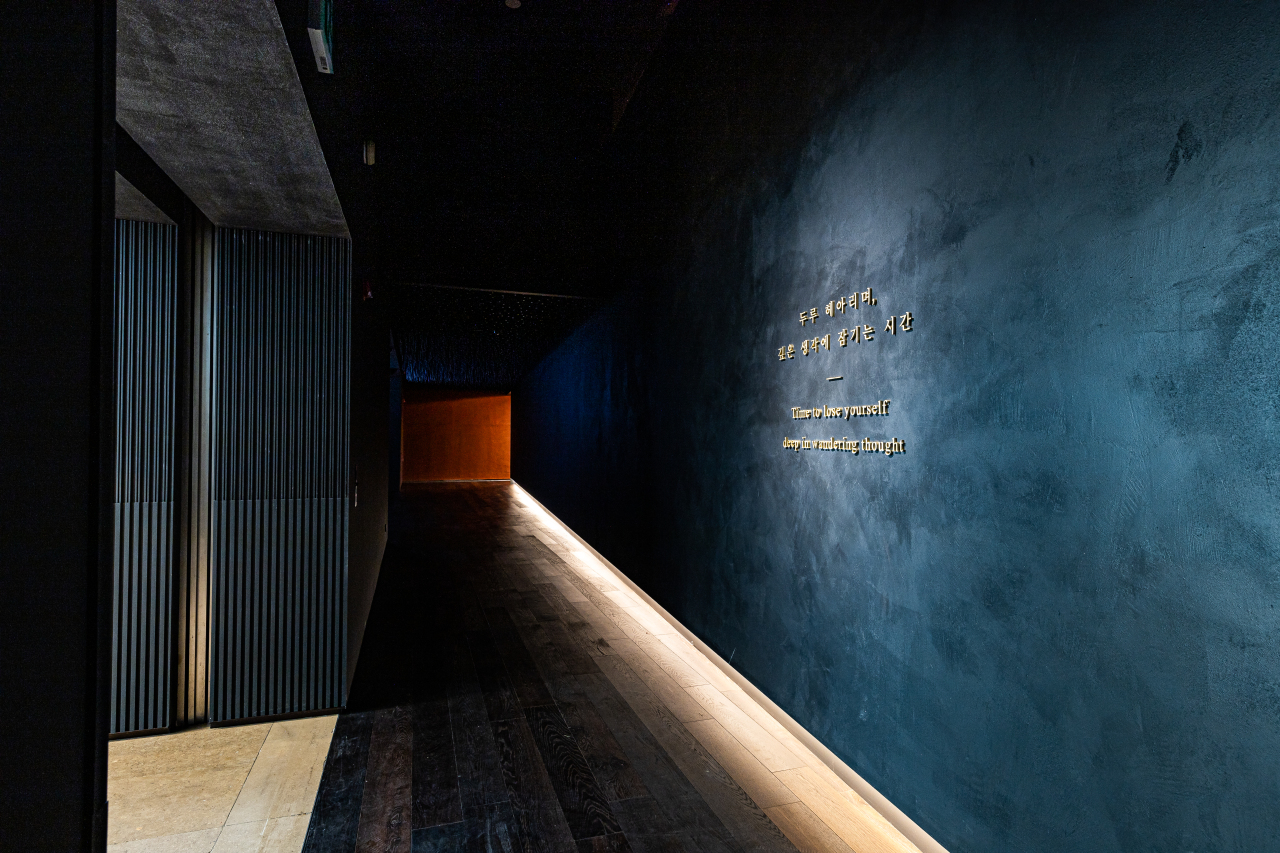 The entrance of the exhibition for two Pensive Bodhisattvas, which are designated National Treasures, in the permanent exhibition hall of the National Museum of Korea (NMK)
“On the right side, you can see a bronze statue produced during the Three Kingdoms period (57 BC-AD 668) which is designated as National Treasure No. 78. This one is wearing a splendid crown on its head while the lower part of the statue does not have many decorations. On the other hand, the statue on the left was created in the 7th century and has the face of a boy. You can also see that it is not wearing many accessories,” Shin said.

Curator Shin also added that audiences can take a closer look at the back of the statues to discover their different sides as well.

The exhibition ends with an animated clip titled “Lighthouse” created by the French artist Puss. The clip shows the statue turning into a lighthouse that guides lost souls.

“We are using animation for the first time,” the curator said. “People tend to think that museums are boring, but we are constantly making changes to make things more interesting.”