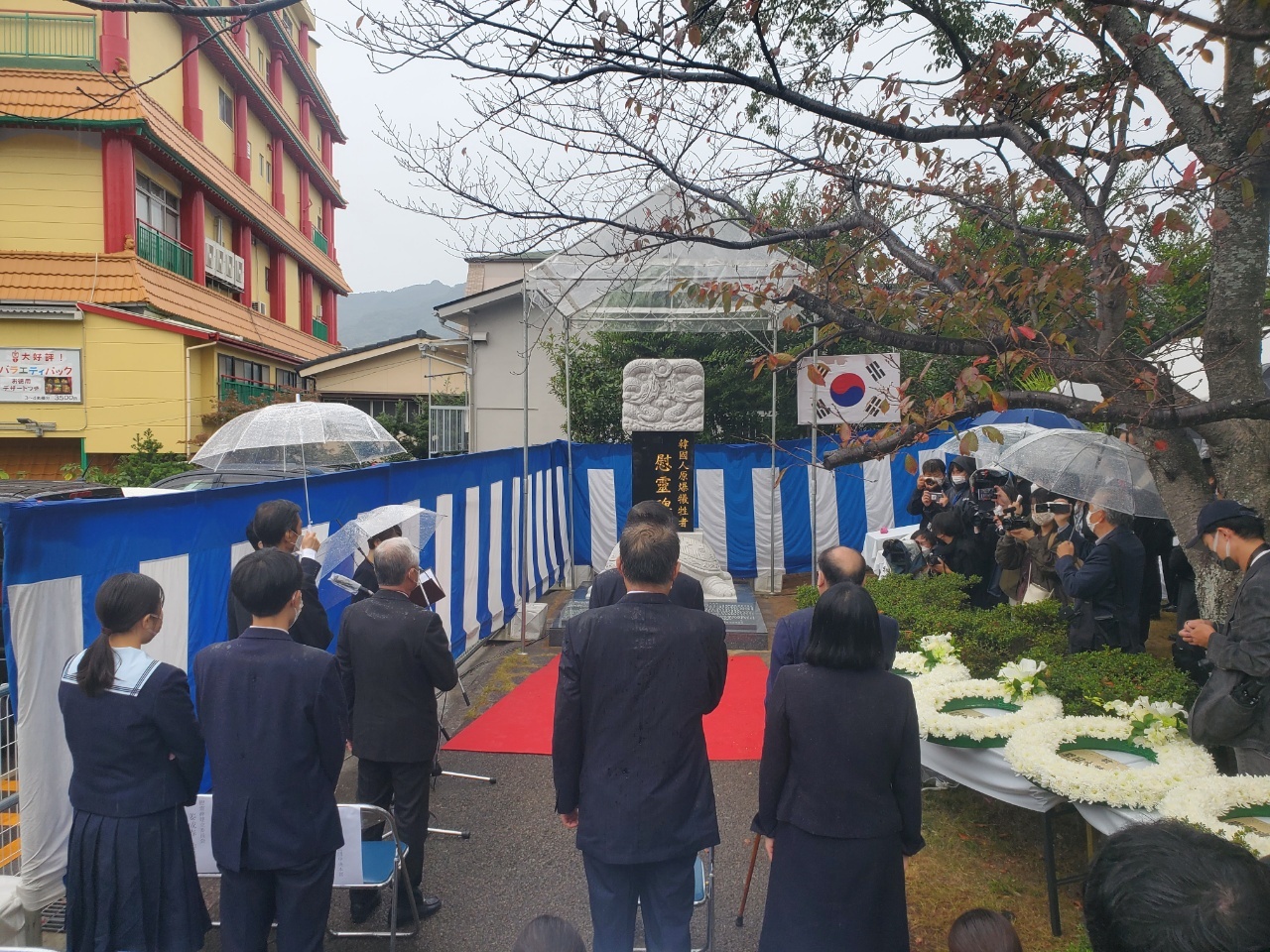 Officials salute the national flag during an unveiling ceremony of a memorial stone for Korean victims of the US atomic bombing of Nagasaki at the Peace Park in Nagasaki, Japan, Saturday. (Yonhap)
A memorial stone for thousands of Korean victims of a US atomic bombing of Nagasaki in 1945 was erected in the Japanese city on Saturday, its promoters said.

The monument was unveiled at a ceremony in Nagasaki Peace Park, which commemorates the atomic bombing of the city on Aug. 9, 1945, with some 100 people, including South Korean Ambassador to Japan Kang Chang-il, Nagasaki city council members and a peace delegation of Japanese high school students, attending the event despite the rainy weather.

Although there is a small memorial stone in the corner of Nagasaki Peace Park, which was set up in 1979 by pro-Pyongyang Korean residents and Japanese civic groups, this marks the first time that the monument is established with support from the South Korean government.

Many of the Koreans were brought to many Japanese industrial cities as forced laborers during Japan's colonial rule of the Korean Peninsula from 1910-45.

The new monument is the result of 27 years of efforts by the ethnic Korean community in the southwestern Japanese city and the South Korean government.

The first memorial stone to honor the forgotten Korean victims was erected in Hiroshima Peace Memorial Park in 1970 by the Korean Residents Union in Japan and memorial services were held every year, but there had been no similar events in Nagasaki.

To have a monument like one in Hiroshima, the local chapter of the pro-Seoul residents' organization in Nagasaki in May 1994 asked the city to provide a site in the park for the monument, but the then Nagasaki Peace Park was under renovation, and its request was denied.

The stalled process had a breakthrough in 2011, when the South Korean Consulate-General in Fukuoka officially requested a site in the park for the monument erection.

In 2013, the pro-Seoul residents' organization in Nagasaki formed a steering committee for the project and submitted a proposal to the city government the following year.

But the authorities did not approve it then, taking issue with its design, size and inscription that described the Koreans as victims of forced labor.

After relentless efforts by the local community and the South Korean mission, the municipal government recently gave the green light as the two sides reached an agreement about the monument's epigraph, written in Korean, Japanese and English.

The Korean and Japanese versions describes the victims as people who were mobilized as laborers and troops "against their will," while the English inscription refers to them as people "forced to work."

Originally, the group wanted to build a 3.5-meter high monument, but its height was reduced to 3 meters after accepting the Japanese city's proposal.

"Some people worry that the memorial stone for Korean people may create political problems between South Korea and Japan," South Korean Ambassador to Japan Kang said at a memorial service held after the unveiling ceremony. "But Japan should think about why there has not been a monument for Korean victims (at the park)." (Yonhap)