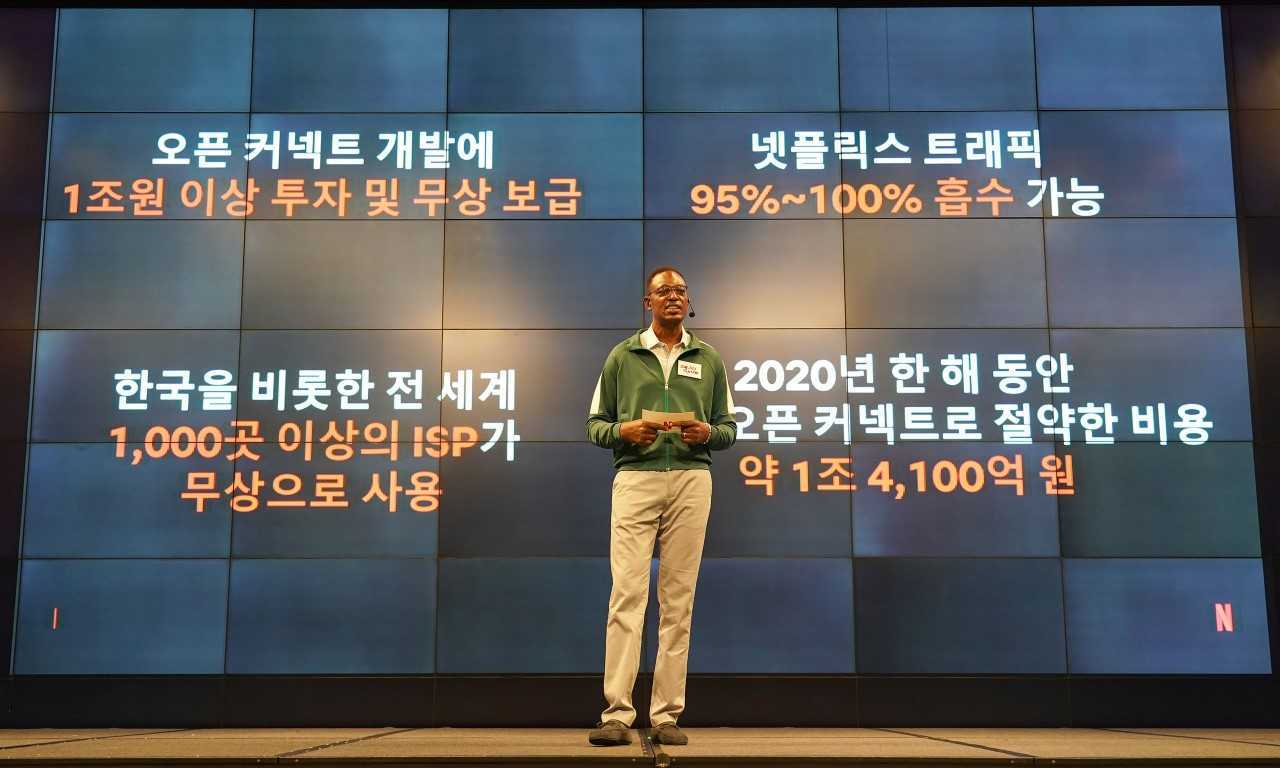 Garfield began his speech by talking about how Netflix is willing to invest more into creating Korean content. However, when addressing the most heated issue on paying internet service providers bandwidth usage fees, he maintained the company’s previous position, arguing that it does not have a duty to pay for network usage.

Addressing its conflict with local ISPs on the network usage fee issue, the global streaming platform operator highlighted its content delivery network called “Open Connect” as a win-win solution to the problem.

Open Connect reduces network traffic by at least 95 percent and this has helped ISPs globally save more than $1.2 billion in 2020, according to Netflix.

“We want to support and work with internet service providers to make sure the streaming is easy and efficient,” he said. “That is why we invested over a trillion won to build and provide a content delivery network that we call ‘Open Connect.’ It stores our content closest possible to our members.”

However, local ISPs such as SK Broadband insist that Netflix should share network maintenance costs in Korea, especially after its traffic increased significantly in Korea due to hit contents like “D.P.” and “Squid Game.”

In June, Netflix lost a lawsuit against SK Broadband. A local court ruled against Netflix, saying that the global platform operator should “reasonably” give something in return to SK Broadband for the use of the network. Netflix appealed the decision in July.

Garfield added that Netflix is willing to discuss with Korean internet service providers on the issue.

“Network traffic and congestion is a challenge that we have to address if that is the problem. Then let’s begin the conversation that includes SK,” Garfield said, adding that Netflix is willing to find a way to leverage the latest technology that also ensures the growth of local ISPs.

Meanwhile, Garfield also hinted that the company has plans to share the success of its content “Squid Game” with its creators.

“We are a subscription-based service and not pay-on-demand service, so there isn’t a sample system for evaluating what the financial impact of every show is,” he said. “With that being said, we are learning and figuring out ways in making sure that our success is shared with the partners.”